Home » 50-Years Since the End of the Gold Standard

50-Years Since the End of the Gold Standard

The gold standard is a monetary policy in which fiat currency is tied to gold. Most Western countries utilized this policy after the 1944 Bretton Woods Agreement. In fact, the gold standard was ubiquitous for well over a century; it seemed as though the policy would never change. Yet, in 1971, the U.S. ended this relationship with gold, thereby ushering in a new monetary policy regime in the country.

August will commemorate 50-years since this momentous shift in global monetary policy. The shift marked an important milestone in the history of both U.S. fiat currency and gold itself.

In the early years of the Great Depression (1929-1934), the Federal Reserve maintained the gold standard as the economy worsened. Many people started hoarding gold as protection, and while European countries dropped the gold standard- the United States held on and passed the Gold Reserve Act.

This act made it illegal for individuals to own most forms of gold and required them to turn in their gold coins and bars to the government for $20.67 per ounce of paper money. The Gold Reserve Act helped the U.S. government increase its gold supply. They then raised the price to $35 per ounce, which allowed them to print more money and kick start the economy’s growth. The economy’s recovery was bolstered by World War II and the New Deal.

The United States experienced an economic boom in the decades following World War II. However, as the 1960s came to a close, this growth began to wane, and economic concerns started to grow. By 1970, unemployment and inflation were rising, and the country’s economy looked as if it might be headed for a recession.

With fears that the dollar would start to devalue, U.S. President Richard Nixon and his administration looked toward changing the country’s monetary policy. On August 15, 1971, Nixon announced that the United States would no longer allow dollars to be exchanged directly for gold at a fixed $35 per ounce.

In his address to the country, Nixon explained why he took this drastic measure:

“In recent weeks, the speculators have been waging an all-out war on the American dollar. The strength of a nation’s currency is based on the strength of that nation’s economy — and the American economy is by far the strongest in the world. Accordingly, I have directed the Secretary of the Treasury to take the action necessary to defend the dollar against the speculators.

I have directed Secretary Connally to suspend temporarily the convertibility of the dollar into gold or other reserve assets, except in amounts and conditions determined to be in the interest of monetary stability and in the best interests of the United States.”

This measure was the beginning of the end of the Bretton Woods Agreement, as nations worldwide began to take control over their own domestic monetary policies.

How gold was impacted

President Nixon broke the direct link between the U.S. dollar and gold, forever altering the relationship between the two. For decades up until that point, gold had been pegged to the U.S. dollar at a rate of $35 per ounce. But once this price peg was broken, the price of gold immediately soared. Additionally, beginning in 1975, Americans could legally hold gold again as the Gold Reserve Act’s restrictions were removed.

Gold prices immediately experienced their most enormous surge in history between 1971-1980. After hitting $100 per ounce in the early 1970s, gold reached a value of $900 per ounce in 1981, after which time the price cooled off. Over the next 50-years, the price of gold would appreciate more than 4,000%. 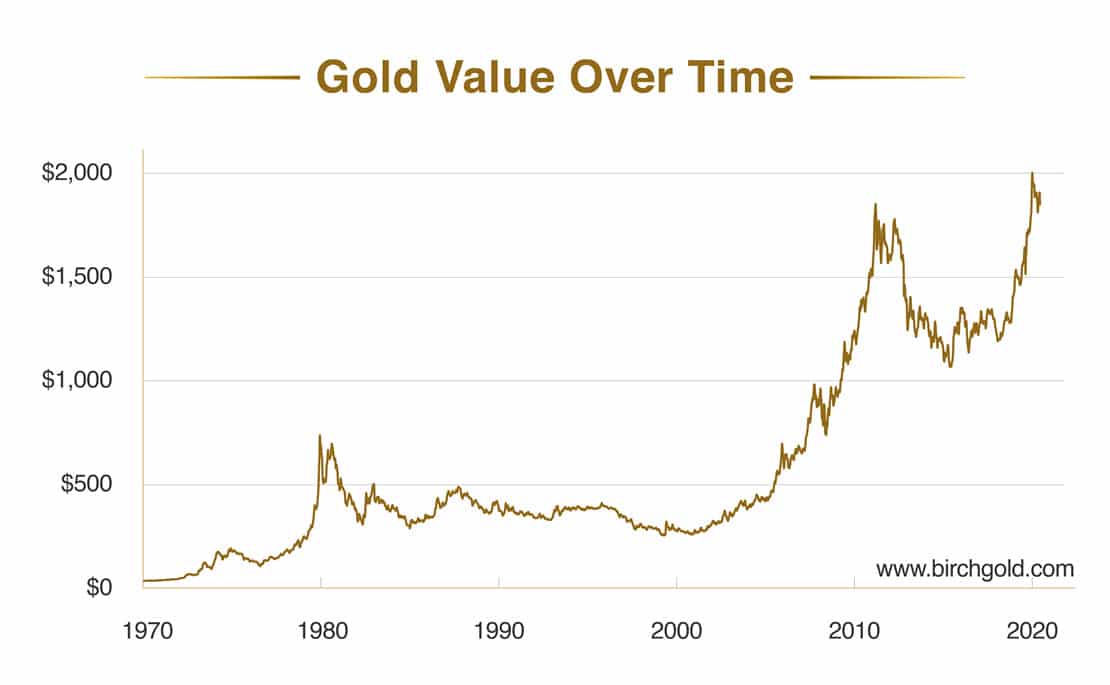 What the end of the gold standard means today

President Nixon opened the doors for a vibrant gold market for investors. It didn’t take long for gold to transition from a currency peg to a desirable commodity as a hedge against inflation. This change helped the gold market blossom globally, trading both over-the-counter and on exchanges. All told, $146 billion of gold is traded daily on the open market.

Investment options for the precious metal expanded as well. Investors didn’t just have the opportunity to invest in physical gold but also in various other ways, like via ETFs, gold miners, and other investment derivatives. Furthermore, Gold IRAs opened the door for investors to couple the tax benefits of a retirement account with the desirable properties of the precious metal.

Will it ever return?

Since the U.S. has deviated from the gold standard, questions remain whether this policy would ever be enacted again.

Yet, it seems clear that the gold standard will remain nothing more than a relic of history for a few reasons:

Ultimately, it seems unlikely that the U.S. would ever opt to return to its previously abandoned gold standard.

How to take advantage of this 50-year “Golden” anniversary

Since the U.S. abandoned the gold standard, gold has become a desirable asset for all kinds of investors seeking a safe haven from the stock market’s volatility and as a hedge against inflation. You can take advantage of today’s worldwide gold market with a Precious Metals IRA from Birch Gold Group.