Home » Blog » As the taper continues: What has Quantitative Easing done to our economy, to the dollar… to your savings? 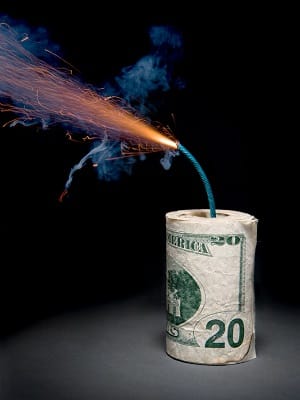 After more than five years and $4 trillion, indications from new Federal Reserve Chair Janet Yellen are that the end of Quantitative Easing is near. Once upon a time, former Chair Ben Bernanke said that an unemployment rate of 6.5% was the benchmark for when he would think about beginning to taper QE. Instead, the Fed jumped the gun with unemployment still at 6.7%: First with a reduction of $10 billion a month in December, then with another $10 billion in January – fairly aggressive! Janet Yellen recently testified before the House Financial Services Committee that, all things being equal, the taper would continue full speed ahead. And that’s in spite of recent indications that the economy isn’t faring very well.

So after all this time of clinging to the policy, confident that it was working, then confident that it would eventually work… now by all appearances they want out as quickly and gracefully as possible. What happened? Why the quick about-face?

One theory is that the thought of $4 trillion created out of thin air makes even the bankers at the Federal Reserve blanche. (Is that possible?!) Combine that with the soft economic data as of late and perhaps they feel forced into a position where they have to admit QE is not working, and will not work. In fact, while domestic unemployment has remained stubbornly high, inching down painfully slowly – and that’s despite the fact that we’ve seen a massive drop-off in the labor participation rate – capital has been chased overseas in search of a decent return. This is because QE, as intended, has kept interest rates low. What was unintended, however, was that it would cause capital to flee the U.S. This is why the emerging markets have been so rattled by the taper; that same capital that came in so quickly is now gushing out of their coffers with similar ease, showing us that the Fed blew a global economic asset bubble that now looks to be popping. After a while, adding trillions to the balance sheet while doing absolutely no good just becomes embarrassing.

Of course, this theory very generously gives the Fed credit for actually seeing that it was wrong. And even as they congratulate themselves publicly on this wise policy that saved the economy from something much worse (ummm, soundness and sustainability?), privately, they know better and are seeking an exit strategy.

A second theory is more cynical, but draws from past performance. When we asked Fed watcher John Berlau, Senior Fellow at the Competitive Enterprise Institute in Washington, for his reaction to the taper, he said, “It’s heartening to see even an Orthodox Keynesian like Janet Yellen admit QE has its limits, but we’ll have to watch what she does. The Fed has many times said it was going to pull back, only to end up inflating even further.” Indeed.

It’s what they do, not what they say. That’s what we really need to watch. Of course, markets will react to anything – both talk and deeds – and the Fed knows that. The great hope has been that maybe if they keep saying the economy is in an upswing, the market will believe them and act accordingly, making perception reality. All of this talk of tapering is supposed to engender confidence in the recovery. And since a recovery isn’t going to start happening in response to taper talk either, perhaps we should be on the lookout for an onslaught of easing in the future, triggered by whatever.

Berlau told us more: “QE hasn’t worked because it is based on a faulty premise – the Keynesian ‘Phillips Curve’ tradeoff between unemployment and inflation that was discredited by the stagflation of the 1970s. In reality, there is no tradeoff, and inflation can actually cause unemployment if it discourages investment in a country due to lack of price stability. Also, whatever stimulative effect QE may have had has been swamped by the onslaught of new regulations from Obamacare to the Dodd-Frank so-called financial reform and credit-constraining international banking agreements like Basel III.”

And while the Fed still wrings its hands at the prospect of deflation to justify money printing measures, many of us might welcome a little. The Fed has massaged reality out of its economic indicators, but that doesn’t change reality. The reality is that of course there is devastating inflation creeping into the most important budget items of American families. The dollar is losing purchasing power. But will the Fed or the Bureau of Labor Statistics ever admit it?

Regardless, the best protection in this uncertain economic climate is to preserve your wealth by trading in your devalued dollars for gold. It is foolish to trust those in charge of the dollar, hoping they have some special knowledge and can magically turn this all around. Add some stability to your portfolio with a solid foundation of gold: call us at (800) 355-2116 or click here to request a free investment kit.