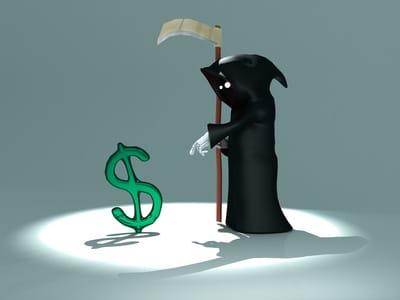 We’ve already detailed the many ways United States policy is stupidly driving the dollar into a freefall. From outrageous tax reporting demands on foreign banks (in the form of FATCA), to fines on foreign banks for not complying with U.S. laws that they never agreed to, to your run-of-the-mill inflation exportation, the world is getting fed up with our bullying ways. More and more countries are coming to realize that there are ways around the endless strings we attach to transactions in U.S. dollars and the liabilities we impose on them. If these other countries get together and talk, they will come to realize that they can create economic trading blocs that don’t have to put up with us, our Federal Reserve, our IRS, our puppet international banks or our dollars – and that spells major trouble for dollar demand in the future.

Last week, the BRICS nations made splashes on just this front. In its current form, the BRICS is a bloc of rapidly developing economies, all of whom are positioning themselves to be financial powerhouses. The group is made up of Brazil, Russia, India, China and South Africa – so far.

With last week’s developments comes the question: Could BRICS be expanding? It’s a very possible scenario, which brings us to the first toll rung for the dollar last week.

Our close and highly strategic ally, Saudi Arabia, has been making more and more moves that has people wondering if they might like to jump on board with the BRICS. For example, they are developing their own sovereign wealth fund that is separate from their central bank and our dollar. In an obvious move away from the petrodollar’s stranglehold on the Saudi economy, it is dedicated to “prudent investment”.

At Birch Gold Group, we believe in diversifying out of the dollar. We’ve held this belief for years. Now, Saudi Arabia is clearly acting upon the same rationale!

This is a big deal.

Saudi Arabia is also talking more and more with the BRICS countries. This has to be making U.S. powers-that-be more than a little nervous. Without the world’s biggest oil exporter magically turning our inflation into oil, the chickens – or dollars, as the case may be here – would come home to roost in a devastating way for the U.S. economy. 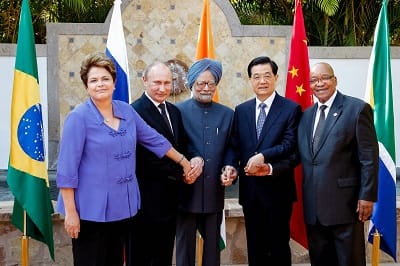 And here’s the BRICS’ second blow dealt to the dollar last week: The bloc announced the formation of their own alternatives to the International Monetary Fund (IMF) and the World Bank. The New Development Bank (NDB) will be their version of the “World Bank”, and the International Finance Corporation (IFC) will provide lending for major infrastructure projects – this is similar to what the IMF does. Each of the BRICS nations will fund this joint venture with $10 billion, and they will raise an additional $50 billion from new partners that they will allow to join in the future – like perhaps Saudi Arabia?

Why would the BRICS want to create these alternative entities? Because both of the current ones are headquartered in the United States, with their funding coming with American strings and American values attached – just exactly what the rest of the world is getting weary of. The rest of the world is looking for alternatives to being forced to deal with the world’s biggest predatory lender when they find themselves in a bind. Of course, the irony is that it’s often U.S. fiscal and monetary policy that has put them in that bind in the first place!

For almost any nation outside of the U.S., it is a positive thing for the world to slowly break free of dollar hegemony and weaken the monopoly of these mammoth “international” banks and lenders. But for the U.S., and for American citizens especially, this is yet another signal of chaotic times ahead. The dollar – the currency that we operate in, save in and work for – is threatened and attacked on all sides. Are we strong enough to fend it all off? Time will tell, but in the case that we can’t, we encourage you to look into ways to protect yourself. Own something the Fed can’t print into oblivion, and that any of the BRICS would gladly stand with. Own gold.