Home » Blog » We’re not in Kansas anymore – How China is Isolating the U.S. (and dollar) from the world

Once the undisputed global economic superpower, the U.S. has lost its grip to China. Is the dollar’s fall from grace far behind?

Titled ‘Time U.S. leadership woke up to new economic era’, the piece looks at the many ways in which the United States is losing influence around the world to China and other emerging markets, while at the same time becoming increasingly isolated.

Summers especially points to the charade that is our two-party political system as a main culprit for our dysfunction, saying that both the left and right are responsible for not only the decline of the country, but also allowing other nations, like China, to fill the void we’ve created.

China’s rise in power has been well documented, and appears to be only growing stronger as more and more nations turn their back on the U.S. dollar.

What’s the latest move away from the U.S. as global economic superpower? Despite serious disapproval from Washington, many of America’s allies are joining China’s proposed new financial institution, the Asian Infrastructure Investment Bank (AIIB). This includes our closest of allies, including England and Israel.

What’s more, many countries that the U.S. has an open disdain for, such as Russia and Iran, are founding members of the AIIB.

They say a picture tells a thousand words. Here’s that map again from the top of this article, of who’s in and who’s out of the AIIB: 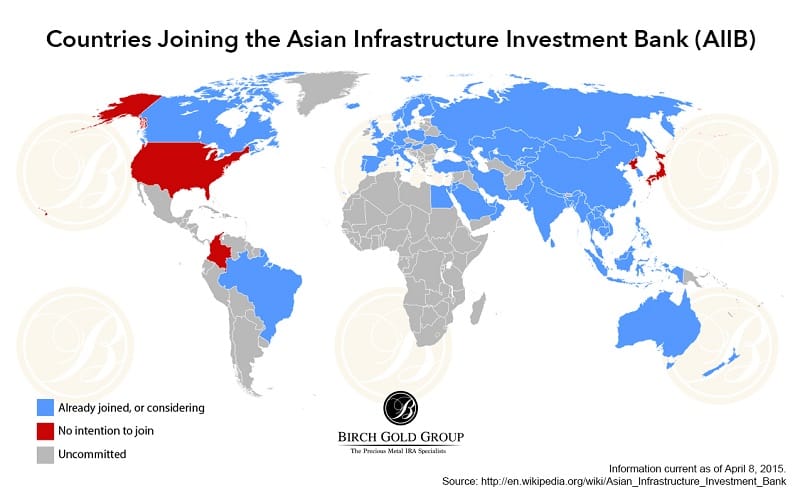 Take a good look at this map. Think the U.S. is becoming isolated and irrelevant?

Besides the U.S., the only other notable non-applicant country is Japan, who is facing a debt crisis of their own. But even the Japanese are ultimately expected to join – and that’s despite its ongoing and bitter dispute with China over the Senkaku Islands.

Summers argues that institutions such as the AIIB are rising because the U.S. has increasingly and stubbornly refused to cede power within the International Monetary Fund (IMF) to other nations. Another attraction for many nations is that, unlike at the World Bank and IMF, powerful nations like the UK, China and U.S. are not given veto powers. This ensures a level playing field.

A level playing field on the global stage is not something the U.S. is accustomed to. Without veto powers, the U.S. is like Dorothy from the Wizard of Oz without her ruby slippers; although in the case of the AIIB, Dorothy is not even in Neverland, let alone wearing her slippers!

Just to show you how fed up the rest of the world has become with the U.S., take a look at the 10 million Venezuelans that have signed a petition this month protesting U.S. aggression. That’s one-third of the entire country putting pen to paper!

It seems former Congressman and Presidential candidate Ron Paul was right all along in saying that American prosperity would be damaged by welfare, warfare, corporatism and fiat money.

Now that the decline of America is in full view, this message is starting to find its way into the mainstream, with people like Larry Summers stating what many of us have been saying for a long time.

It might be too late for America to remain the world’s super power. But it’s not too late to save face.

If the U.S. does indeed decide to join the AIIB, it will be part of a network of emerging economies that will trade in a more democratic style than the current structure. But should the U.S. continue to stubbornly sit on the sidelines, it will face being ostracised by rapidly growing foreign economies at a time when it needs all the help it can get.

Will Washington wake up in time, as Larry Summers is calling for, or will the United States fall by the wayside? And, even if some in Washington start calling for us to join the AIIB, do you really have faith in the dysfunction of our two-party system to make it happen?

If you can’t answer that question with a confident “yes”, it’s time to consider moving some of your savings out of the dollar – becoming increasingly irrelevant with each passing day – and into gold.