As the world is moving inexorably away from the dollar, could we one day become witness to a similar scenario here in America? 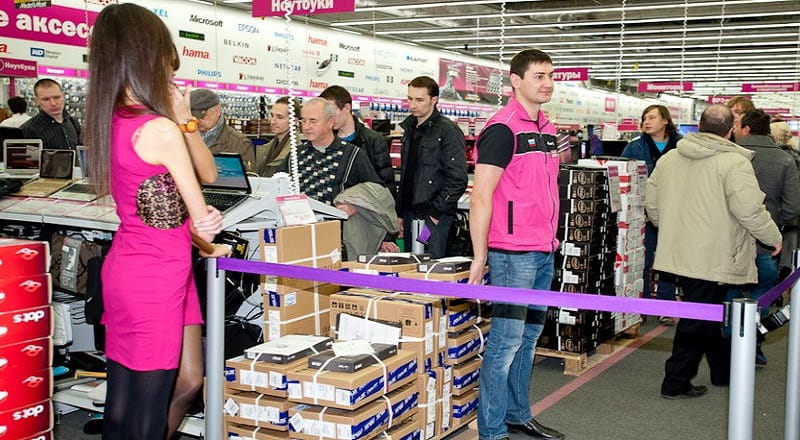 Fearing hyperinflation, Russian consumers aren’t taking any chances so they hurried into stores Wednesday to buy big ticket items before prices were forced further up by the rapidly plunging value of the ruble.

This week the Russian ruble has hit a record low of 80.10 against the dollar on Tuesday, raising fears of bank runs. The currency lost 19% of its value in just the past three days amid the worst financial crisis the country has seen since the late 1990s. Cars and home appliances were flying off the shelves – in some cases in record numbers, according to the Associated Press.

As some stores were reporting record sales, others, facing rising prices of imported goods and unable to pay for new imports, have suspended operations. Apple, for instance, has stopped selling its products online, while IKEA is suspending sales of kitchen furniture and household appliances. Some auto traders are also halting sales on fears that the ruble could sink further.

And prices of goods are rising daily. Household appliances and electronics retailer MVideo said Thursday that prices of its most popular items are going up by 15%, since they have to replenish with new imports earlier than expected on account of stronger consumer demand.

Lines at foreign exchange booths are getting longer because many Russians are also converting their rubles into dollars and euros.

So far this year, the ruble has collapsed by nearly 50% against the dollar as a result of Western sanctions and tumbling oil prices, and the Russian government has been desperately trying to stabilize the currency, which, according to Matt O’Brien of the Washington Post, “comes at the cost of sacrificing the economy.” The Russian economy, says O’Brien, “is as strong as the price of oil…Putin could afford to invade Georgia and Ukraine when oil prices were comfortably in the triple digits, but not when they’re half that. Russia can’t afford anything then.”

Russia’s central bank raised interest rates on Tuesday by nearly 700 basis points to 17% – a move that is unheard of. Normally a hike in basis points is between 25 and 50. It was the sixth interest rate hike in Russia this year, which came less than 24 hours after a 100 basis point hike.

“The bank’s move also demonstrates that Russia, like almost every other country in the world today, is clueless about monetary policy,” writes Forbes. “Earlier this year its central bank shelled out $75 billion to shore up the shaky ruble on foreign exchange markets. The interventions flopped. The Bank of Russia then let its currency float—or, more accurately, sink. But yesterday’s precipitous plunge forced Russia to do something dramatic, hence the huge hike.”

Unfortunately, all fiat currencies eventually go this way. Their value is being constantly eroded by governments to boost consumer spending, to increase exports, to help an ailing economy, to avoid raising taxes, to finance debt.

Governments have control over the supply of national currencies. They can print as much money as they want to cover deficits without raising taxes, which results in loss of confidence in the currency, and ultimately inflation. And when inflation spikes, as in Russia right now, people start losing their shirts.

“I don’t need this car,” said Maxim Legonkikh, an impulse buyer in Russia who had just got himself a brand new Porsche – he already owns two Porsches and a Land Rover. But with the ruble tanking, he thought it was probably a good idea to spend some cash.

On the other hand, Russians who didn’t trust their government’s monetary policies and allocated a considerable amount of their portfolio to gold have seen their wealth appreciate by 60 percent in just the past month.

Back to the scary thought – can this same scenario unfold here in America one day, considering that more and more nations are moving away from using the dollar for trade? It might not be as dramatic, but as contributor to the Daily Reckoning Nick Jones puts it, we have everything set in place that have led to the collapse of other fiat money in history. If some of your savings aren’t protected from the declining value of the dollar, you can get some peace of mind by moving part of your portfolio into gold or silver. Call us today to start, or click here to get our free information kit.

You can follow us on Facebook to stay up to date with news about the economy and precious metals.

Russian Ruble Not Out of the Woods Yet

Why Russia Is Wrecking the Ruble

What If Spain Devalued?