USD has gone full throttle into the currency war

As the dollar strengthens against other currencies, the U.S. economy is beginning to suffer. This leaves the Fed with only this one option… 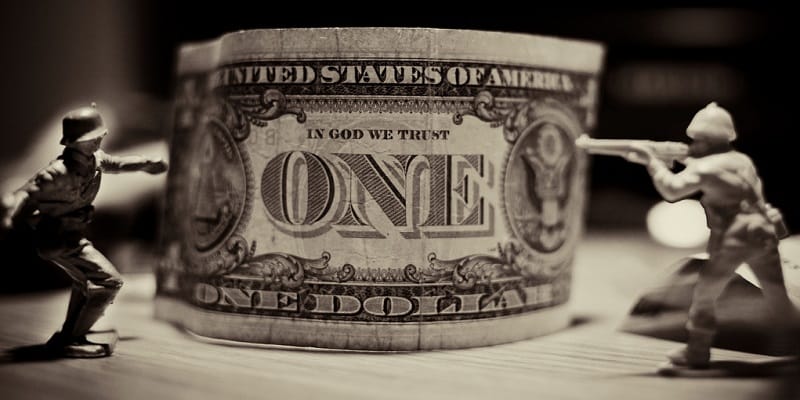 In recent years, as competition on the global market has heated up, nations around the world have joined in a currency race to the bottom – to devalue their currencies faster than those of other nations. Strangely, the United States has done the opposite; our policy makers have sat back and watched the dollar gain in value.

Our nation’s complacency on this matter cannot continue for much longer. The U.S. has recently reached its worst ever trade deficit. Simply put, if the dollar continues to go up in value, it will crush the U.S. economy.

Why? With a strong dollar, exports will continue to decline, as will corporate earnings from abroad. This in turn will negatively affect official inflation, which was reported to be at -0.1% this past April 17 – that’s negative territory. And as we know, the greatest enemy of the Federal Reserve is deflation.

Renowned economist Nouriel Roubini recently confirmed what anyone with any common sense had to know was coming: The U.S. has now gone full throttle into the global currency war.

So what is the Fed likely to do to fully engage?

There’s been a lot of hot air uttered recently about raising interest rates. But that would likely spur the dollar even higher in value and send the already-sinking economy further into deflation. So that seems unlikely.

The Fed really only has one way out: Print more money. We have seen it three times before, with Quantitative Easing 1, QE2 and QE3. Now the potential for QE4 is being predicted by many leading economists, including Peter Schiff.

Schiff, speaking at a recent conference, pulled no punches: “There is no recovery; the labor force has collapsed.” Schiff believes QE4 will begin later this year.

In either scenario, QE4 is coming – and soon.

Schiff knows better. In fact, he predicts that there will not only be QE4, but that there will be more to come after that…”more QE’s than Rocky movies”, as he has said in the past.

So isn’t it just a little ironic that a SEVENTH Rocky movie is slated to be released later this year – perhaps just in time for QE4?

Should the Fed begin QE4 later in 2015, it would not be the first central bank to do so this year. In fact, more than 20 other central banks have adopted the policy in 2015. The European Central Bank is in the process of unleashing at least $1.28 trillion in government bond purchases. So, with such large numbers being thrown around in the markets, the Fed will be forced to play its card.

We all have seen everyday costs rise. They continue to rise. And now, as the Fed moves to further weaken the dollar, the rate of increase will likely only increase. That’s why NOW may be as good a time as any to move some of your cash into physical assets like gold. If you haven’t already, give us a call.