Home » Blog » Tick-Tock: The Yuan Slams Another Nail Into the Dollar’s Coffin

Tick-Tock: The Yuan Slams Another Nail Into the Dollar’s Coffin

With the Chinese yuan scoring yet another victory this week, how much longer will the dollar be able to withstand the pressure? 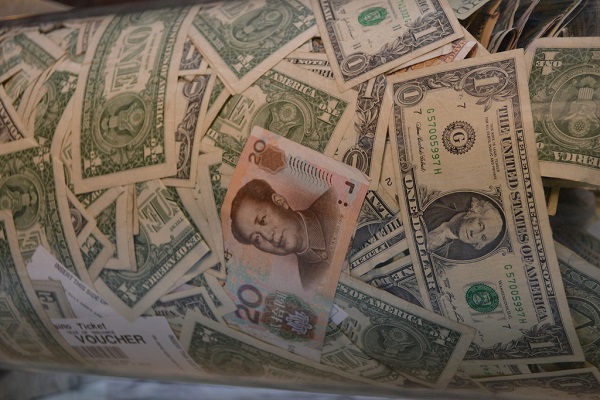 The ongoing internationalization of the Chinese yuan got a major boost this week with the London Metal Exchange (LME) now accepting the currency as collateral against contracts.

This follows regulatory approval from the Bank of England, which now allows the LME to accept five currencies as cash collateral: the U.S. dollar, British pound, euro, yen and yuan.

Here’s what Trevor Spanner, Chief Executive of LME Clear, said this week in regards to the yuan’s (renminbi) seemingly irreversible ascent as a global currency:

“The renminbi is on its way to becoming one of the world’s most widely used currencies, and we are pleased to be able to help our members take advantage of the opportunities arising from the renminbi’s internationalization.”

In 2014, the LME saw $15 trillion worth of business move through its doors. China wanted to cash in on this opportunity, and now they have succeeded in doing so.

But China isn’t stopping here. Now, the Shanghai Gold Exchange is in talks to list its bullion products on the CME Group’s trading platform and yuan-denominated gold contracts on the Dubai Gold and Commodities Exchange.

As the world’s top producer and leading consumer of gold, it’s quite fitting that China would want more influence over controlling the metal’s price and use it as leverage to boost the role of the yuan on an international level.

This is exactly why Beijing is planning a gold fix for the yuan. (This move will also further undermine the role of the U.S. dollar in valuing the commodity.)

All these maneuvers add up to this one, indisputable fact: With seemingly each passing day, the Chinese yuan is gaining more influence around the world, and is getting set to potentially dethrone the dollar… or at least give it some stiff opposition.

This momentum may come to its ultimate head in Peru this October, when the International Monetary Fund (IMF) will almost certainly add the yuan to the SDR currency basket.

If this indeed happens, watch out for what happens to the value of both the U.S. dollar and gold.

These aren’t the only ways the yuan is threatening USD supremacy. The United States doesn’t like any of the big financial projects China has going live in the coming months, all of which could diminish the stature of the greenback in the world:

And there’s MORE: China is doubling down to dominate the coming decades with the Silk Road Project, which will see the Eurasian region linked, further strengthening China’s influence in the developing region.

All the above is bad news for the dollar. Worse yet, there’s not much anyone can do to stop any of it.

Even without the yuan’s ascent, nations around the world were already turning their back on the dollar in international trade. But now, this movement has left a power vacuum for the yuan and gold to fill.

We can all hypothesize until we’re blue in the face as to why the price of gold has been decreasing lately. But one thing is for certain: As the dollar continues to lose its influence in the world, if it were to lose its status as the preeminent global reserve currency, what will your savings be in?

The time to start preparing for these inevitable changes is now.

Did you know that silver is in limited availability and not keeping up with demand? Read all about it here.