Home » Blog » After Greece and Puerto Rico, is the U.S. Next?

After Greece and Puerto Rico, is the U.S. Next?

Greece looks like the first domino to fall. With Puerto Rico not far behind, here are the lessons that we can take away for ourselves. 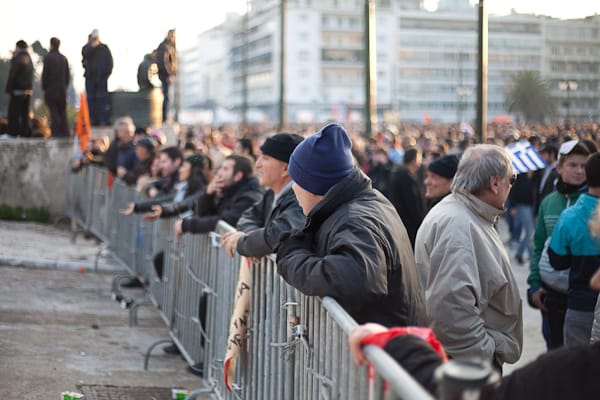 After months and months of speculation, Greece has defaulted.

It’s a sad story that’s yet to fully play out, with the fallout potentially infecting all regions of the globe – even the United States – so it’s critical that you keep an eye on the latest developments.

But what if we didn’t just feel the effects of the default here, but it actually happened here?

You may think that a Greece-style default in the United States would be impossible. Well, unfortunately, you are wrong. It already has happened.

If you haven’t been watching the news, the Governor of Puerto Rico just announced that the island territory cannot pay back or service its debt.

The BBC writes, “Puerto Rico’s governor has said the U.S. territory cannot pay its $72bn debt and is close to defaulting ahead of emergency talks with legislators. In a TV address on Monday, Alejandro Garcia Padilla said he would seek a moratorium on repayments and form a team to restructure public debts.”

I can remember from my bond trading days on Wall Street that customers would line up for new issue Puerto Rican municipal bonds, as they were state and federal tax free, and also usually paid a higher yield than similar domestic credits. Here’s an important safety tip for future investing: If the guaranteed return is too good to be true, it’s most likely too good to be true!

CNBC reports that noted bond expert Larry McDonald said, “Puerto Rico poses a substantial threat. The problem we’re seeing around the world is that political officials that are borrowing money in the capital markets have not been completely forthcoming about their financials.”

Why is default in Puerto Rico such a problem? Because most of the investors in those Puerto Rican bonds are Mom and Pop retirees who were sold a bill-of-goods by their broker (who also earned fat fees in the process). These types of bonds are normally insured by entities like MBIA, Fitch, etc. These insurers now have a really big problem. The insurance they have written on other fixed-income securities will become suspect. The insurers could even be in need of a bailout!

Does this remind you of the 2008 financial crisis yet?

But alas, Puerto Rico is not the main problem. The real problem is the unsustainable debt of the federal government of the United States. For example, let’s say you are a family with $100,000 of short-term credit card debt and your family income is about the same – $100,000. Now let’s say you are living high on the hog and borrowing about one-third of what you spend. How long do you think it will take before the bank cuts you off? Yesterday? Well, that is what we are doing as a country. That is the house of cards we have built. The sovereign debt of the United States is approaching $20 trillion.

Now here’s the key question you must ask yourself: As an American just looking out for my savings, what should I do? As the USA continues to print money, as they devalue the currency and pay off all of this debt with paper money picked off the money tree, wouldn’t you like to own an asset that actually maintained its value?

In the face of this situation, do you want your retirement savings to be backed by something that can’t be printed out of thin-air. If you’d like to learn more about how gold can protect your savings, give us a call.