Home » Blog » Tales from our cash-starved government: What these precedents mean for you

Tales from our cash-starved government: What these precedents mean for you 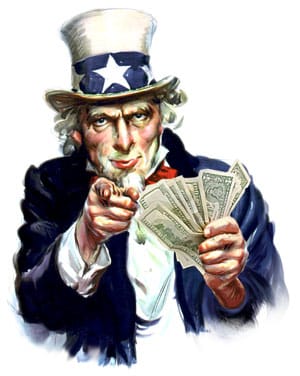 As the U.S. dollar begins to be rejected around the globe, as our politicians continue to refuse to control government spending, as all efforts to revive the American economy and bolster the tax base have been misguided and have just made things worse… as avenue after avenue to bolster our faltering system is exhausted, what sort of actions can we next expect to see from the government?

We’re getting the answer right now, and the government’s actions can be summed up in one word: desperation. The numbers are not adding up, the situation appears to be increasingly unsustainable and the clock is beginning to run out.

Locked into this downward spiral, the government has set its sights on collecting more and more sources of wealth – even when its attempts to get it becomes more and more ridiculous. Here are two examples from recent days.

First, take this year’s tax refunds. Quite literally, Washington has been trying to take this year’s tax refunds – from hundreds of thousands of taxpayers on the most absurd of grounds. The Washington Post reported that the Social Security Administration had been laying claim to taxpayer’s refunds as payment for ancient debts, going back decades in some cases. And here’s the kicker: Many of those old debts aren’t even owed by that particular taxpayer! The government has claimed that the IRS overpaid a refund at some point to a father or a mother or someone the taxpayer was related to – often deceased – so refunds from this year were being garnished to satisfy that old debt… a debt that these taxpayers had never been notified of previously!

The specific example in the Post was that of Mary Grice:

“Mary Grice, a federal worker who lives in Takoma Park, Md., never got the refunds she was expecting to see in her mailbox this year. The government seized her checks because of a $2,996 debt that was supposedly incurred under her father’s Social Security number. Her father died in 1960, when she was 4, and her mother received survivors’ benefits thereafter.

“But 37 years passed between when the Social Security agency says it overpaid someone in the Grice family and when Mary Grice’s refund was taken. She was unable to find out from the agency exactly who received the overpayment – her mother or perhaps her father’s first wife, both of whom are no longer living.”

The words “unmitigated” and “gall” come to mind when thinking about the bureaucrats who sent those notices.

Fortunately, as the story received media attention, the IRS and the SSA backed down… at least somewhat. If the debt is more than 10 years old, they will no longer pursue it. However, Congress still needs to “clarify” the fact that the justification they used in the first place for collecting these debts (based on a stipulation bundled into the 2008 Farm Bill) does not actually allow them to do it at all.

Why this isn’t obvious and needs clarification at all is a sign of the times. The Feds are getting more and more desperate.

Then of course there is the tense situation in Nevada at the Bundy Ranch. Yes, Cliven Bundy owes taxes. The courts have said so. His cattle graze on public lands and there are contracts in place for the grazing rights, and that’s how it works out there. However, it should be noted that in exchange for receiving taxes and fees from ranchers for grazing rights, the Bureau of Land Management is supposed to actually manage the land: repair fences, maintain waterways, etc. Bundy’s claim is that when they stopped doing these things, he had to undertake the land maintenance himself, so he stopped paying the fees.

Legally, Mr. Bundy is not in great standing, however our purpose here is not to take sides but rather point out that after 21 years of nonpayment of taxes, only now is it all of a sudden critical that the government get their money.

And yet again, when enough attention was brought to this situation, the government stood down… for now. But whether they will or won’t come back for Bundy’s cattle, count on the fact that they will be back *somewhere*.

We’ve already seen that “somewhere” start to creep into our retirement savings. Obama’s new MyRA plan will move many unsuspecting citizens into investing in the dollar. And more recently, the proposed budget for 2014 places a stricter cap on the deductions you can take on contributions to your 401(k) – meaning that even more of your income could be taxed.

If you haven’t begun to move your savings out of the dollar and protect it with gold, now’s the time. Call us at (800) 355-2116 or just click here to get a free information kit. As always, there is zero cost and zero obligation to talk to us. We’re here to help.