Europe can’t dig its economy out of a hole. Now desperate times have led to desperate (and potentially devastating) measures. 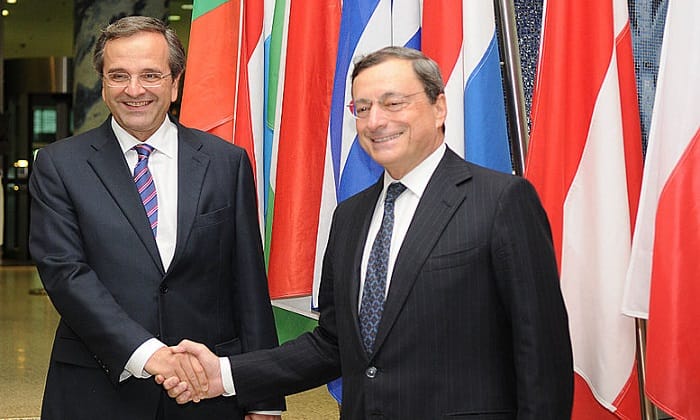 You’ve all heard children say, “But Dad, it can’t be bad, everyone’s doing it!” And so the European Central Bank (ECB) decides to print money. Of course they don’t call it that; they call it Quantitative Easing. But, it’s printing money – and lots of it. Japan did it, the U.S. did it, and according to the many talking financial heads, those efforts worked. Personally, I don’t think the fat lady has sung on that one yet, but that’s to be seen.

Why hasn’t the ECB followed America’s lead and done this already? Well, they have to some extent; they just haven’t gone full-on Keynesian yet. The Germans haven’t let them.

Germany has special memories of printing money. Many believe that after the First World War, it was the German money printing machine that laid the path for World War II. After the Versailles Treaty was signed, which forced Germany to pay war reparations, the Deutsche Mark was valued at 2-to-1 to the U.S. Dollar. A couple years later, Germany had printed so much money to pay reparations, the state could not build the printing factories fast enough to print anymore, and the resulting hyperinflation created the economic havoc and social unrest that gave Hitler the opening he needed.

Because of this painful past, the Germans realize that foolish monetary policy has consequences and have thus reigned in the more irresponsible members of the ECB, preventing them from following the Paul Krugman fan club off the monetary cliff.

But this may be changing. The Germans still believe that the real cause of Europe’s low economic growth is structural. Many of the European economies, especially on the periphery, still have not pushed the kind of reforms needed to make their economies competitive. Their labor markets are rigid. Their populations have become addicted to cradle-to-grave social freebies and can’t bear the thought of being forced off of government handouts. Their spending is STILL out of control even though the last financial crisis should have taught them better.

Germany has been trying to force these governments to change by any means other than firing up the money printing presses. Even Mario Draghi, the President of the ECB, recently said that no amount of QE can bring economic growth without reform. His words fall on deaf ears.

Last week the ECB hinted that a form of Quantitative Easing will most likely be coming in January. Right now the plan is to buy in bulk government securities of the periphery nations (and also France, who is broke as well) in order to reduce the yield on their bonds and consequently reduce their borrowing costs. This will all be in an attempt to stimulate economic growth.

In short, Europe will be attempting to solve the debt crisis with even more debt. But Bill Gross, the former manager of the PIMCO Total Return Fund, the largest bond fund ever, sees a problem with that approach: You can’t solve a debt crisis with more debt.

Why is this important to the average American? It’s important because it is more evidence of central banks around the world going absolutely insane regarding monetary and fiscal policy. Mark my words, all of this printing of money will have a consequence. We just don’t know how it will manifest itself, whether it be inflation, currency devaluation, collapse of an institution, etc.

Whatever the ultimate consequence is, some unforeseen event will set the negative train in motion. If your savings aren’t already protected from whatever may come, now is the time to move into gold, the only currency that has held its value as a natural currency throughout history.

Right now you can click here to get a free information kit on gold and silver. Or to stay up to date on the latest news on precious metals, follow us on Google+.