Fearing a turn for the worse in the global economy (and taking a lesson from history), Germany is buying more gold. Find out what past lessons are guiding them to the precious metal.

Germans are now rushing into gold. In search of a safe haven from a possible Greek debt default and the ultra-loose monetary policy of the European Central Bank (ECB) that makes even Ben Bernanke look fiscally conservative, Germans have significantly picked up their purchasing since the first quarter of this year.

New figures from the World Gold Council reveal that the German people increased their purchases of the monetary metal by a surprising 20% in the first three months of 2015.

But within Germany, it isn’t just the people who are flocking to gold for protection: In recent years, we have seen the German central bank, the Bundesbank, attempt to repatriate its gold from abroad.

In 2014, the Bundesbank repatriated 120 tonnes of gold: 85 tonnes from the New York Federal Reserve and 35 tonnes from Paris. By 2020, the Germans have requested a further 210 tonnes from New York and 307 tonnes be sent home from Paris. That’s a staggering 517 tonnes still to come!

Those core issues currently hanging over Europe, of the debt crisis in Greece and excessive money printing from the ECB, are central to why Germans are now making such a big move to gold.

Currently, in a last-ditch attempt to keep the titanic EU afloat a little longer, the ECB is pumping a minimum of €1.14 trillion into the economy through to the end of September 2016. The money printing program from Europe’s version of the Federal Reserve started in March of this year, with monthly purchases of €60 billion in government bonds.

The Germans are well aware of what this money printing can do to a currency; they don’t need to look any further than their own Weimar Republic from the early 1920’s.

Here’s what happened to gold versus paper money during the height of hyperinflation in Germany: 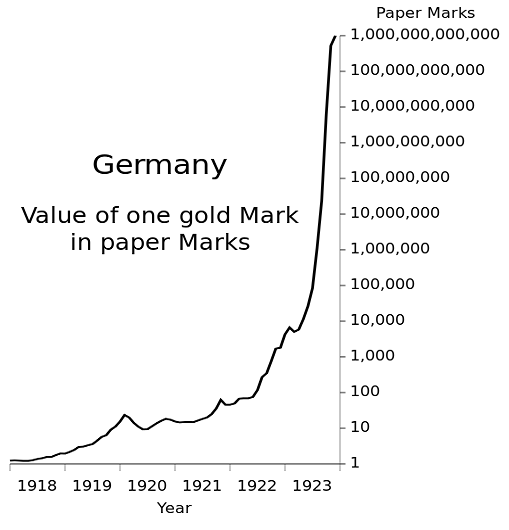 This scenario is no doubt in the back of the minds of the German people who would have heard stories from their grandparents’ generation about the horrors of hyperinflation. Can you believe that money was used in Germany to light the fire, as it was cheaper than using newspaper?

Then there’s the situation in Greece, one which could be a catalyst to bring down the global financial house of cards on its own.

At present, Athens and its creditors have locked horns over who owes what, and neither is willing to compromise. This is further increasing uncertainty in the Eurozone.

Germany has benefited the most from the Euro experiment, but they are also keenly aware that the tides of power are shifting east, and towards gold.

For one, Germans see China’s rise in power and may share the opinion of many others that it’s only a matter of time until the yuan challenges other leading currencies, including the U.S. dollar.

And second, China and Russia have recently hinted at future gold-backed currencies.

Just this week, German national newspaper DWN explained how such a scenario may unfold (translated into English):

“China intends to introduce later this year a gold fixing reference price in yuan. The country wants to create a competitor to the London gold price fixing. The country liberalized its gold market and aims to establish the gold exchange in Shanghai in order to determine the global price of gold. The Americans fear that China could introduce a new gold standard to displace the dollar.”

“A new gold standard to displace the dollar.”

Wow! Hope you caught that.

Q. So what do Germany, China and Russia all have in common?

A. All three nations are piling into gold, not just for diversification purposes, but also as possible use in future trade between nations.

But for those who understand why gold is such an integral part to any savings, now is a great time to get started.