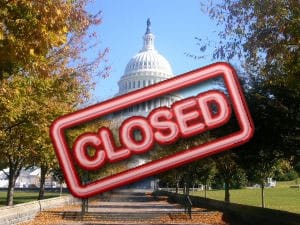 So you can’t visit a national park right now without hopping a barricade. Some 800,000 “non-essential” federal employees will be off the job for the time being, and over 1 million federal workers might have delayed paychecks. There will be delays at the Veterans Administration, which is otherwise so prompt to serve those who served our country…

And yet, the EPA is almost entirely down for the count. The IRS will cease audit and collections functions for the duration of the partial government shutdown. In other words, this is a net win for the American people!

But we’re saving money, at least, yes? Not so much. In past government shutdowns, all missed paychecks were made up, meanwhile the same bills continue to pile up. Nothing has been done to address our fiscal problems or reduce outlays, there will just be some delays in paying some of them. These delays cost money while creating pain and drama.

It will be interesting to see who in Washington blinks first and how long it will take. The mechanics will foreshadow the bigger ticking time bomb headed our way in 2 weeks – the debt ceiling.

Though the government shutdown has gotten everyone’s attention, social security checks are still being cut. Medicare payments are being made. The Federal Reserve is (of course) still printing money like mad and none of their employees are affected.

Not so if we reach the debt ceiling without an increase.

If we reach the debt ceiling, the nation’s statutory borrowing ability is exhausted and we would have to *shudder* live within our means. The government would be dependent on cash on hand and tax receipts. This is about $5 billion a day. A pittance, right? Yes, when you spend $11 billion that same day. Without our borrowing ability, choices would have to be made about what outstanding bills to pay, which ones… not to. Everything would theoretically be on the chopping block. Social security payments, interest payments, everything.

Think about this for one second. Our government outlays and promises so far exceed its ability to pay that it must borrow voraciously, constantly, profligately, and maximally. How long will this be sustainable, even if we make it through another debt ceiling battle this time? How responsible is this sort of accounting?

Understandably, credit ratings agencies are watching closely and talking worst case scenarios. They are quick to qualify, however, that they don’t think it will come to that. We have our doubts as well.

But what about next time? When they presumably pass the new debt limit, what will it be? How long until we are right back in this position again? A year? 18 months? 3 months? We can’t be sure. But we will get there. Then the uncertainty begins all over again, and we all know how the market feels about uncertainty.

Washington seems to thrive on it. If they did not, they would simply admit that the debt limit itself was not accomplishing its stated goal anymore, which is to limit the amount of debt the government is allowed to rack up. It is a self-imposed limit. They could unimpose it. No one is seriously mired in the delusion that Washington intends to curb spending voluntarily at any point – ever. Stop playing games and eliminate the debt ceiling. It’s a sham and everyone knows it. However, it is not an idea Washington is taking seriously at this time.

Like government shutdowns, the debt ceiling is a political football both sides seem to enjoy running up and down the field.

The question is – how can you best insulate your portfolio from the insanity in Washington? We have some ideas…