Home » Blog » Something’s got to give: How Greece may soon trigger the fall of our financial house of cards

Moving ever so close to default, Greece may soon take actions that could send financial shock waves across the globe. 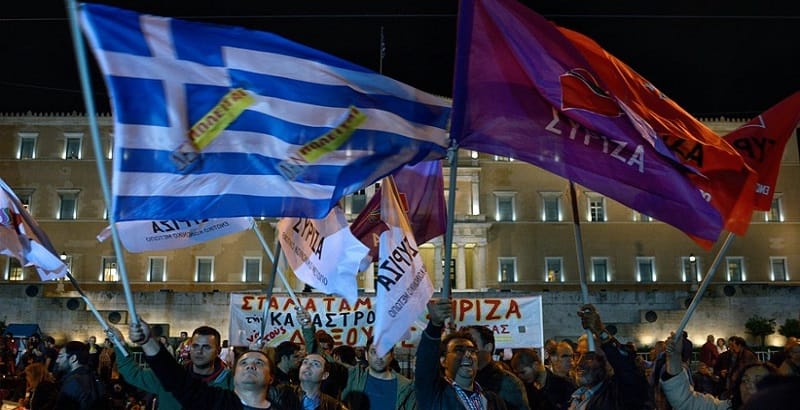 Greece is rapidly running out of money.

In a last ditch effort to remain afloat, the nation recently passed a law requiring all cash reserves in public sector entities to be transferred to its central bank, the Bank of Greece.

This is just the latest round of capital controls sweeping across the world as governments and institutions begin the scramble to get their hands on assets to finance their growing debts. The chart below shows capital pouring out of the country – so Greece needed to come up with a solution, and fast. 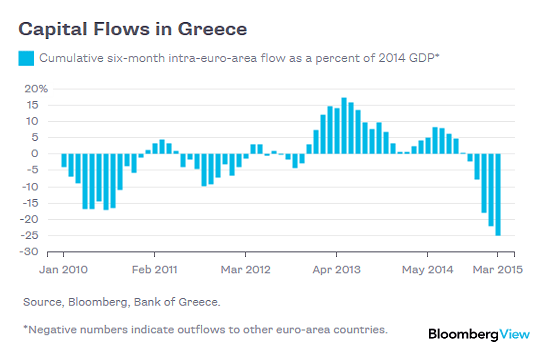 Right now, Greece is negotiating with the rest of the eurozone nations to receive assistance. But should those talks falter, it seems as though Russia and China may be there to provide support for the Mediterranean nation.

Another option that Greece is considering to keep the nation running is to return to its former national currency, the drachma, or run it parallel to the euro.

But Greece is running out of both time and options as eurozone ministers grow impatient. The newly installed Greek government will soon be put to the test as this situation will not go away on its own.

Instead of compromise, Greece may actually allow itself to default, claim the IMF debt to be fraudulent and leave the eurozone altogether. And if that were to happen, the whole EU house of cards could possibly begin a spectacular collapse.

Just take a look at what Greece owes in payments in the near future: 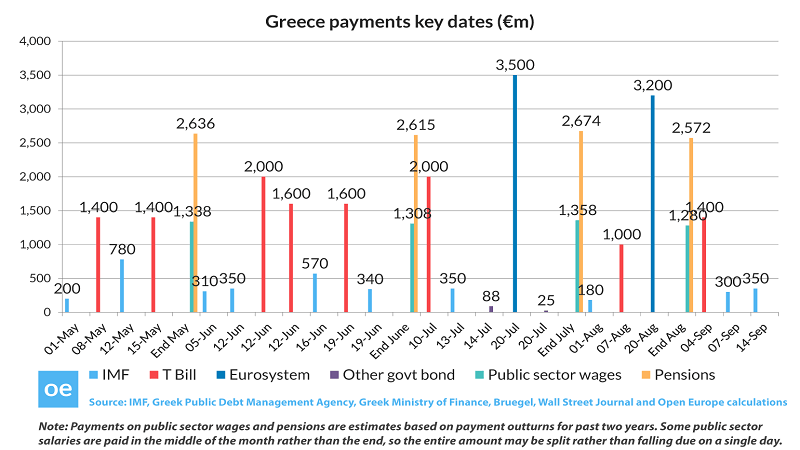 Something’s got to give…

To think that a relatively small nation like Greece could bring down the whole EU by leaving the eurozone, it’s clear how integrated and fragile the global economic system has become.

And more cards in this fragile house could tumble as well.

If Greece defiantly and successfully refuses to accept any more austerity measures, could other nations in the eurozone follow suit? What happens if larger nations, like Spain, Portugal or Ireland, decide to leave as well? No doubt citizens of those other nations would demand similar actions rather than face more bureaucratically-imposed austerity.

While we are witnessing a small European nation scramble for funds and implement capital controls, think about what could happen in the United States when our government needs to find more capital to stay solvent?

Could we soon see capital controls here, or might the government go after the pool of money sitting in IRA’s, 401(k)’s and other retirement accounts?

You may scoff at such notions. But you may not be quite as sure if you’re not already up to speed on how the U.S. government is already borrowing from Thrift Savings Plans (TSPs), or on newly-implemented regulations that make it “legal” for banks and governments to confiscate money from savings accounts.

With all this turmoil and uncertainty, it’s critical that you are comfortable with the security of your savings. If you have even the slightest of doubts, think about moving some of your savings to gold. Call us today – we can help.

To learn even more on how to protect your savings with precious metals, watch our webinars on YouTube. They are free to watch, and packed with useful information.