Home » Blog » Greenspan: Our bond market is the ‘best of the worst’

Greenspan: Our bond market is the ‘best of the worst’

In recent months, a growing number of financial experts are warning of a bubble in the bond market. If any of your savings are in bonds, you need to see what they’re saying. 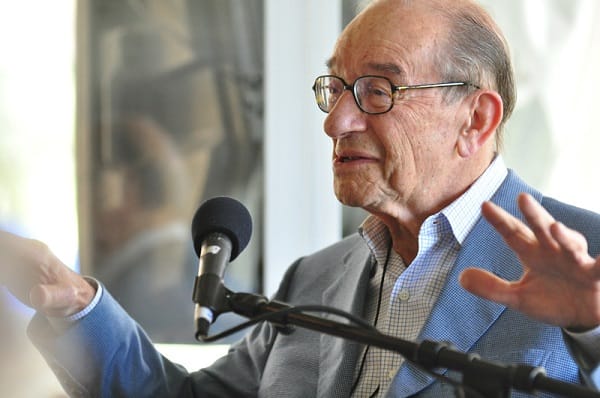 Alan Greenspan is ‘quite’ worried about a bond market bubble.

In recent years, the bond bubble in the U.S. has been inflated by artificial demand from the Federal Reserve and from investors fleeing troubled European markets.

The former Federal Reserve Chairman sees it this way:

“The United States, strangely enough, as badly as we are doing – is still the best of the worst. Nobody is doing well… And that still doesn’t make us any better.”

Greenspan is not the only high profile person to voice concern over the bond market. Billionaire investor Carl Icahn has joined the growing number of voices warning about the bubble that’s brewing:

“I think the high-yield market is in a bubble. I think that is a no-brainer. This thing is going to go over this cliff.”

But this rampant buying seems to be slowing down, and cracks in the bond market are beginning to appear, with an exodus already underway in recent weeks.

In the second week of June, $2.9 billion was pulled out of the bond market. The following week, a whopping $4.1 billion was taken out.

Even if the Federal Reserve were to try to stave off the day of reckoning that Greenspan and Icahn predict by keeping rates low and buying more debt through QE4, this would only be a temporary ‘fix’.

The free market would at some point overpower any manipulation put on it from the central planners – as the free market always does.

Bonds are beginning to be sold, with many countries seeing negative yields – meaning that some people are buying bonds with the guarantee of losing money over their duration.

This is considered to be the ‘new normal’ in places like Europe, according to Goldman Sachs.

Of course, this tactic spectacularly fails the first rule of investing according to Warren Buffet, who is famously quoted as saying, “Rule No. 1: never lose money; rule No. 2: don’t forget rule No. 1”.

That should sound off some alarm bells about the current state of the bond market.

Here’s the other problem: With interest rates near zero percent, and with the Fed likely out of bullets, a rate hike in the future seems likely. Once rates do begin to increase, the value of bonds will likely fall and investors would flee the bond market.

With so much of Americans’ retirement savings in bonds – especially the savings of those who are close to retirement – the potential risk is enormous.

It’s for this reason – among many others – that more and more Americans are moving their retirement savings to physical precious metals. While bonds are generally considered to be a conservative asset, they’re still backed by nothing more than a promise. Gold and silver are hard, tangible assets that have been around for thousands of years.

If you don’t already own some precious metals in your savings, isn’t it time you started?

Spotlight: Watch the founder of the world’s biggest hedge fund, Ray Dalio, explain why you should own gold here.