Home » Blog » Could Low Gas Prices Really Pose This Threat to Your Savings?

Could Low Gas Prices Really Pose This Threat to Your Savings?

If you thought there could be nothing wrong with plummeting gas, you may be surprised by how much your savings are tied to the success (and failure) of Big Oil. 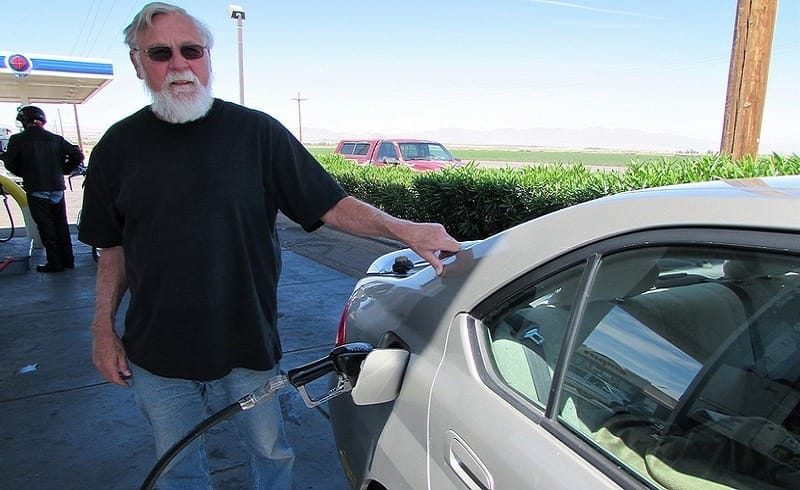 After November’s midterm elections, we had been waiting with bated breath for gas prices to rise again. After all, they usually seem to dip and surge around elections. Or maybe that is only how it seems some years. Memory can be so selective.

But this time the surge in prices following the election hasn’t happened. We suggested to readers, tongue-in-cheek, to fill up their tanks on the way to the polls in anticipation for that post-election upswing, but instead, prices have kept falling. And so, instead of behind-the-scenes forces struggling to manipulate prices downwards for the benefit of the political class, it seems instead that something else is going on.

We’ve been wondering: After dotcoms, after housing, what is the next bubble the Federal Reserve will blow? It could very well be energy. All of the signs are there. We had gotten used to gas prices around $4 a gallon, just as we had gotten to homes appreciating 10%+ every year. (Check out this video of consumers reacting to $2 a gallon gas in 2000.)

In 2007-2008, many Americans found themselves in severe financial distress when we found that no, actually, that scenario in the housing market was not sustainable. And then the crash came. Many Americans made the tragic mistake of cashing out equity in their homes every few years to fuel spending beyond what their incomes would allow. When the crash came, they found themselves very much under water on their mortgages, and the foreclosure epidemic began in earnest.

Fast forward to today. In a foolish attempt to reinvigorate the economy, the Fed has pumped trillions of dollars into Wall Street, which in turn has used most of it to shore up its balance sheets. But if you notice, quite a bit of money has recently been pumped into oil and energy. Consider the fracking boom. And many analysts are noticing a striking similarity between the housing build-up and the energy markets today.

It may sounds almost as crazy and unthinkable to claim there is an oil bubble now, just as it did in 2006 to say there was a housing bubble. Back then, the thinking was, Everyone needs a home. And when they have one, they want a better one. Meanwhile, look at all the homeless people! The demand is nearly limitless!

Except that, of course, demand is actually not limitless. Any industry can be inflated into a bubble when more cash is pumped into it than demand actually justifies. Energy is no different.

It isn’t so simple to think that low gas prices are universally a good thing.

Here’s the simple explanation: In a way, a lot of Americans do own a big oil company – in their retirement accounts and stock portfolios. In fact, just 2.9% of Big Oil is owned by Big Oil. The rest is held by pensions, retirement accounts, mutual funds and other investors. That means that when we experience a collapse in oil prices, just as we are today, retirees and pensioners will feel the most widespread hit. And because interest rates have been so close to zero and returns in energy have been, well, bubblicious, the temptation for the managers of our retirement funds has been to put many more eggs in that basket than is probably wise.

It’s hard to make a case against lower gas prices. It is something you appreciate and feel every day. It gives you just a little breathing room in your day to day budget. Not only that, but it is helping the entire CPI come down. Cheaper transportation means cheaper everything, and if there is anything that can move spending in the economy, it is the feeling of getting a good deal – especially at this time of year.

But so far, lower gas prices haven’t seemed to equate to more spending. Instead, evidence is showing that people are paying down debt and bills with whatever savings they are realizing at the gas pump. And, in an economy that is actually still trying to get a foothold and recover, you would expect that. Of course, if you have yourself convinced that the crisis is over and the recovery arrived months ago, you would be scratching your head about this finding.

What are the takeaways here?

For those who have even just some of their savings in gold: Be glad you have a solid holding in your portfolio. Those who are chasing jackpot returns may just be helping to inflate the next bubble, and yes – oil is indeed subject to overinvestment, malinvestment and bubblehood. Gold is not a fad. It has been around for thousands of years. Gold is solid and tangible and reassuring as you watch other asset bubbles pop.

For those who have not yet moved into gold: Get started today. There is no better time. Gold prices are undervalued, and demand is through the roof. This buying opportunity may be coming to a close fast if indeed energy is collapsing. Investors will be looking for something stable and tangible. Demand for gold could undergo a serious surge. Don’t hesitate. Call us today, or simply click here to get a free info kit on how you can move your savings to gold.

Don’t forget that you can get all of our latest videos on our YouTube profile.