Home » Blog » No Worries for Stocks? CNN Sells Their Kool-Aid to Americans

Despite all the warning signs, despite everything we should have learned from history, CNN is telling Americans the stock market is fine. You judge for yourself… 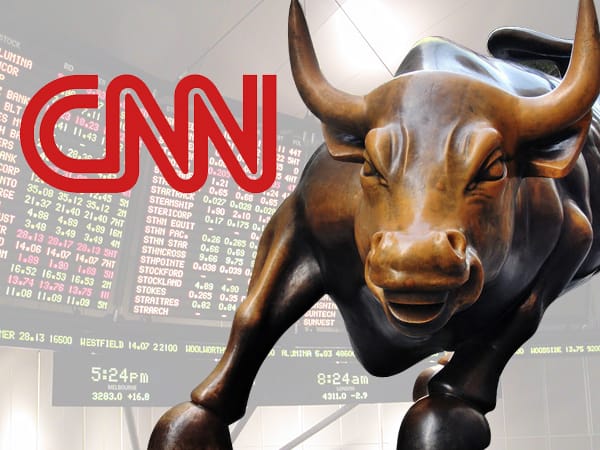 Stock markets around the world are teetering upon a major correction, as we saw chaos unfold last week in the equities markets.

If you saw chaos and panic on the road while driving your car, you would likely slow down, investigate the situation and perhaps change lanes.

But from the mainstream media, we’re hearing one constant refrain: “Do not worry.”

According to Heather Long at CNN, never mind that 18-car pile-up that’s unfolding right in front of you; instead, put your foot down and accelerate. Because according to her and her research, the U.S. stock market is unlikely to crash.

Here are the top 5 reasons, according to Long, why you should remain in the stock market… along with a much-needed dose of reality:

1. The U.S. economy isn’t on the verge of a recession.

According to Wall Street experts cited, the U.S. economy is healthy and far from recession.

That’s certainly reassuring to hear, but let’s not forget that Wall Street “experts” have failed to predict every stock market crash from the past 20 years.

But I hear them say, this time is different!

One reason they say this time is different is because our unemployment rate is back to low levels. Of course, they “conveniently” don’t mention that our labor force participation rate is also dramatically low. That’s those record 94,031,000 Americans who did not work last month, a 38-year low.

But one industry that is thriving at the moment in the U.S. is the stamp industry, which is at all time high production thanks to the 46 million people on food stamps. Talk about job production!

Go to your local Walmart and have a look where all your goods are made. Hint: It isn’t in America.

China is the world’s main producer and second largest economy, so when China is experiencing a slowdown in exports it means that global demand is down. The idea that the U.S. economy is not linked to the rest of the world is complete nonsense. In fact, we saw in 2008 exactly how interconnected the global economy is. When one country sneezes, it’s far too easy for the rest of the world to catch the flu.

Also, if China keeps selling its $1.3 trillion in U.S. debt, like the $180 billion dumped last month, this is going to hit the U.S. economy in a big way. And that will go two-fold if other countries follow suit.

Long cites an email written to CNBC by Apple CEO Tim Cook, who says their company experienced great growth in China for the past two months, despite Apple stocks entering a downward trend.

3. American businesses are doing pretty well (outside of energy).

If by “doing pretty well” you mean mass closures of stores and layoffs across nearly all industries, then sure, things are fine!

Christine Lagarde, head of the International Monetary Fund (IMF), came out this week and stated that they are predicting a weakening in the economy. So expect these layoffs and closures to continue as companies try maintain profit margins.

If rates were to rise to even a mere 3%, the U.S. economy would collapse.

In a bid to stimulate growth, the Fed has done nothing but lower interest rates and print money since the 2008 crash. But with rates now at an unprecedented low of 0.25%, the only options they have left – should they feel the need to “stimulate” more growth – will be to print more money in the form of QE4 or go negative with interest rates.

Around the world, central banks are lowering rates and printing currency to keep things afloat… and they are failing miserably. The idea that the Fed is going to raise rates (more than 0.25%) into a slowing economy is suicide.

Yes, some steam has been let out of the market in the past few weeks, so prices aren’t CRAZY high anymore… just very high.

Now let me give you the biggest tip when it comes to making money in the stock market. Are you ready? Here it is: Buy low, sell high.

That’s it. It’s that simple. It’s how Warren Buffet has made his fortune. Yet it’s basic human nature to follow the crowd and to let greed take over.

If stocks are high – and based on all historical metrics they are – why would you be buying them now?

Could the U.S. stock market rise some more? Sure, in the short-term, yes. And if the Fed desperately launches QE4, that would likely artificially inflate the market… for a while.

But at what risk would that be to your savings? Considering that we’re in what appears to be a bubbly equities market floating in a room full of pins, just waiting to be pricked and burst, it looks like there is much more downside.

Long ends the article with this: “Putting all of these factors together, there isn’t an obvious trigger for a major stock market downturn that would kill the six-year bull market in the U.S.”

Really? I would beg to differ, and would encourage Long to take her head out of the sand.

Thank you CNN for keeping the American people so well informed.

Have you ever wondered what happens when the fed ends quantitative easing? Find out here…