Home » Blog » Jim Rogers to Birch Gold: “We’ve got to stop this, this is going to be bad!”

Jim Rogers to Birch Gold: “We’ve got to stop this, this is going to be bad!” 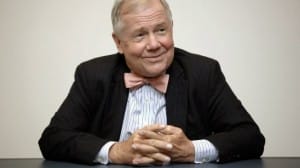 Jim Rogers tells it like it is. And in his latest interview with Birch Gold Group, the legendary investor and financial commentator has lived up to his reputation.

What good is coming of the currency wars raging around the world? Rogers is blunt in his assessment, saying that we all lose in currency wars. But they’re going to keep on going for now, he predicts, because “nobody wants to go down as causing the collapse of the world.”

On Quantitative Easing, Rogers doesn’t hold any more optimism for the outcomes if the Federal Reserve ever attempts to wean our economy off the stimulus program. Although he predicts things won’t be too bad at first, once the Fed ceases the program altogether “it will finally cause the collapse… and then we’ll finally start over. But it may be really painful in the meantime.”

To prepare for the inevitable collapse, Rogers recommends, “Everybody should own some precious metals as an insurance policy. So if they don’t have any right now, I would urge them to go buy something.”

Rogers had much more to share with us in this wide-ranging conversation with us. Get the full contents of the interview, exclusively from www.birchgold.com, right here: https://www.birchgold.com/jim-rogers-interview-qe-currency-gold-inflation/