Home » Everything to Know About the Current Gold Bull Cycle

Everything to Know About the Current Gold Bull Cycle 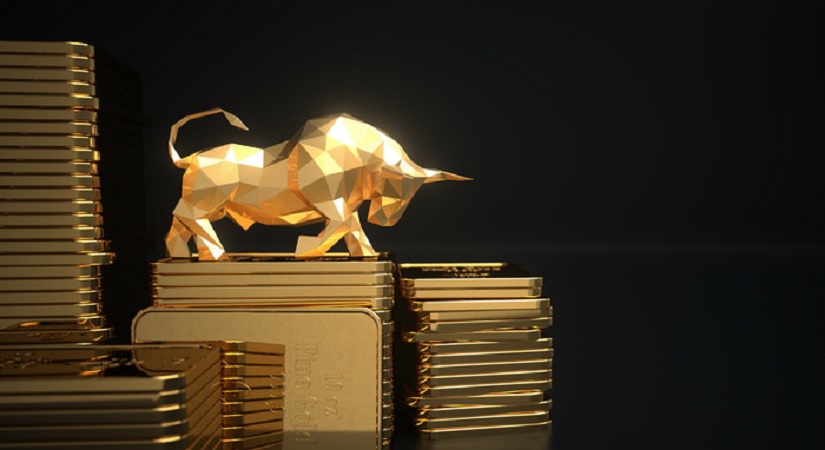 Gold is a commodity that’s been around for millennia. This store-of-value asset is often viewed as a safe haven for investors and has at least maintained its value over the decades. But gold isn’t immune to the natural ebbs and flows of commodities markets. In fact, gold itself has its own market cycles, which arise and fall based on various economic factors.

This article will examine the history of gold, its bull and bear market cycles, and where we are today. It’s important to note that while we can use historical data as a reference point for where we are in the current gold market cycle, it’s almost impossible to know exactly where we are at any given time.

What is a Gold Market Cycle?

When thinking about market cycles, it may be easier to first think of cycles in other areas of life that are easy to understand. Take, for instance, the cycles of the seasons. Each year, the world cycles through winter, spring, summer, and autumn with regularity. Sure, some years it seems that the cold Winter weather spills into Spring, but for the most part, these cycles are regular.

The same can be said of the gold market. A gold market cycle is the regular, repeated trend within the gold market over time. However, unlike seasons – there is no way of knowing exactly when a cycle will start or end, or how long it will last.

A bull gold cycle refers to when the price of gold generally rises, and a bear gold cycle is when prices generally fall. Gold cycles often correspond to the greater economy. This is because gold is viewed as a tremendous store-of-value asset that grows in value during periods of economic contractions. For instance, gold tends to hold its value well during periods of economic recession.

When it comes to gold, there have been many gold market cycles over the past decades. These include bull markets like the 1970s and 2000s and bear markets such as a prolonged period in the 1980s and 1990s. When zooming out over the past 100 years, you can see that gold cycles can last for multiple decades at a time.

Data from MacroTrends shows the average price of an ounce of gold from 1969 to 2020. With this data in a chart, we can see the ebbs and flows of recent gold cycles. These include:

During this time horizon of the early 2000s through 2021, gold growth was 531%. In contrast, the return on the S&P 500 was only 192% (both compounded). As you can see, during this 20-year period with multiple macroeconomic downturns, gold outperformed equities by 339%!

We will look at each of these gold market cycles, what sparked them, and the end result. 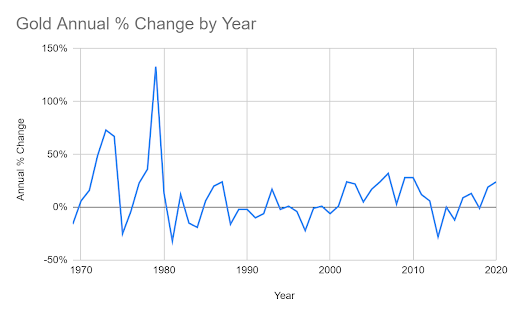 In the early 2000s, money roared through the US economy at high speed. The advent of the internet meant that companies with no actual earnings were able to attain astronomically high valuations simply based on their potential. Concurrently, in 2000 the Federal Reserve raised interest rates multiple times, which many see as one of the primary reasons for the crisis that was to come.

As money piled into equities during this time, gold struggled, as investors could get solid returns in the stock market and weren’t interested in the safety that gold offered. Yet, it wasn’t before long that this bubble burst and stock prices sank almost instantly. Led by a crumbling technology sector that was clearly overvalued, the Nasdaq fell by more than 75% in just two years.

The resulting policy of the Federal Reserve was to cut interest rates in an attempt to stimulate economic growth. With the economic decline and low interest rates, gold began performing exceptionally well as investors moved assets into precious metals, searching for safety during this time.

During this time, then-president George W. Bush implemented several economic policy measures that would be a factor in the coming years. With the nation’s economy in crisis due to the dot-com bubble bursting, Bush enacted tax cuts on income and capital gains.

Investors who were now terrified of investing in stocks again not only sought out gold and other precious metals, but looked toward the housing market as well. And while it appeared the economy was headed for years of prosperity, it would be this very housing market that would prove to be its undoing.

From the year 2000 to the beginning of the Great Recession in 2008, gold rose 198%, while the S&P 500 fell 2% (not adjusted for inflation). A 200% difference between gold growth and equities performance really demonstrates the power of gold through a major recession.

As the U.S. economy recovered from the dot com bubble in the early 2000s, gold was performing exceptionally well. And it wasn’t long before the country was in yet another macroeconomic crisis, this time thanks to big banking and the housing industry. 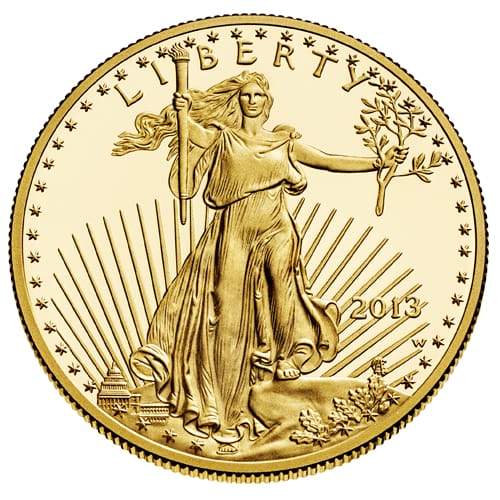 In 2007, it became clear that the increase in home delinquencies and rising debt on corporate balance sheets was a real problem. The following year this crisis hit a boiling point as major financial institutions like Bear Stearns and Lehman Brothers faced bankruptcy, and governments worldwide were left bailing out their largest banks.

The resulting monetary policy was for the Fed to turn toward a Zero Interest Rate Policy (ZIRP). By maintaining a ZIRP, borrowing money became extremely cheap, which the Fed hoped would spur growth in the economy. From December 2008 until November 2015, the US Federal Reserve maintained interest rates near zero.

This should have been the perfect storm for gold. On the one hand, interest rates were near-zero, meaning that fixed assets (like treasury bonds) produced unfavorable returns. On the other hand, the economy was reeling, making equities look too risky for portfolios that were losing value by the day.

Yet, while one might have thought that such an economic collapse would be favorable for gold, the precious metal actually fell at first, dropping below $1,000 to as low as $730 per ounce. Why did this happen? For starters, banks found themselves lacking liquidity and needing money to cover their short-term obligations. But without enough cash to cover their bills, banks turned to alternative measures. One of these was to borrow gold and sell it on the open market. This created a short-term supply increase of gold on the precious metals market and helped to keep prices low for the time being.

But by the end of 2009, this short-term borrowing had leveled out, and gold resumed its rally that many expected when the recession began. As the economy was still in the dumps, gold excelled. The price of gold rallied 149% between 2007 to the end of 2011, peaking above $1,900 an ounce.

The nation’s recovery from the Great Recession in 2008 took several years, and gold prices began to stall once the economy got back on its feet. In April 2013, gold was down 13% in a matter of two days, its largest such price decline over a two-day period in 33 years. At the end of 2013, gold had fallen 28%, with many believing the previous price rally for the precious metal was over.

This hypothesis turned out to be correct as gold continued its decline into 2014. By 2015, the price of gold had dropped to nearly $1,000 per ounce and ended the year down about 12% year-over-year. During this time, it wasn’t just gold that underperformed, but other precious metals like silver and platinum, along with industrials like nickel and copper as well.

Prices hovered in a fairly flat trading range for the next several years, with gold gaining back some of its losses but never fully recovering from the bear market that began in 2013. However, in 2020 another economic crisis would shake up the globe and cause a change in the gold market once again.

The coronavirus pandemic in 2020 took the world by surprise. In the midst of a strong macroeconomy, this global pandemic shutdown entire countries for months on end, thereby halting economic output and spending. As a result, there was a sharp decline in the prices of equities and other investable assets, leading to a panic in the markets. Initially gold dropped to $1,477 per ounce, but this was very short-lived as the asset quickly regained its value and then some, reaching an all-time high in August 2020.

Much like other times of contraction, gold performed quite well over this period, as investors flocked to the safe-haven asset in this time of uncertainty. The price of gold hit a record high in 2020, briefly jumping above $2,000 per ounce and up more than 30% over the year. Investors sought out gold during this time, as it was unclear how long the pandemic would last. For example, Bridgewater Associates, founded by legendary investor Ray Dalio, invested more than $400 million into gold in Q2 2020 when the coronavirus pandemic started to ramp up.

But as COVID vaccines were rolled out and nations began opening their borders and economies once again, global fear was assuaged, and economic activity restarted once again. We believe the current gold bull cycle is ongoing.

Where we’re at now

With the global economy still recovering from the coronavirus pandemic and economic stimulus making its way through national economies, many are concerned that inflation has reared its ugly head and can cause chaos in the markets. Inflation would result in a weaker US dollar, causing prices to rise and consumers to lose purchasing power.

There is also the matter of interest rates. The Federal Reserve has reiterated its stance that rates will remain near-zero for the foreseeable future in an attempt to support a further recovery in the United States. Low rates and an influx of stimulus could be major contributing factors to inflation.

The Fed has admitted that inflation has started to creep up but has made the claim it is only temporary. Gold is just the asset investors turn to when inflation is a concern, and there is a strong chance that if inflation is a long-term problem in the US economy, gold is the logical choice to hedge against this risk.

Notable gold investor Peter Schiff highlighted this issue in a recent tweet: “High #inflation keeps pushing the price of #oil higher. So far today, it’s already hit $73.40, the highest price since Oct. of 2018. Yet investors aren’t buying #gold because instead of looking at what’s actually happening to oil, they believe the #Fed that it’s only transitory.”

And while stocks still hover near record highs, it appears most publicly traded companies are overvalued compared to their earnings, creating a possible bubble-like atmosphere for equities. According to Justin Lahart of the Wall Street Journal, “By a variety of measures, including price to expected earnings and price to the past decade’s inflation-adjusted earnings, equities have never been so expensive outside of the dot-com bubble years.”

This creates possibly the perfect storm for gold investors:

Stephen Innes, the managing partner at SPI Asset Management, noted that this is why many investors see gold going higher in the coming months. “The dollar is staying weaker… Gold bulls now have their eyes set on US$2,000, and most of the guys are thinking it’s going to go quite higher.”

While signs point to a continued price rally for gold, note that it is always challenging to determine exactly where we are in the current gold market cycle. This is why you should always do your own research before investing in gold or any other precious metal.

The Cycles of Gold

As you can see, gold goes through its own cycles based on various factors, including interest rates, macroeconomic policy, the strength of the US dollar, and other financial indicators. A gold market cycle can last several years or even a decade under the right circumstances. Investors of the precious metal would be wise to take heed of previous gold market cycles to anticipate how gold will react to future economic conditions.