Home » Gold as a Safe Haven

Gold as a Safe Haven

A safe haven is a place where one can find refuge. In investing, safe havens represent places or assets where you can park your money and have it maintain its value even while the rest of the market is struggling.

When the economy falters or a financial crisis comes along, the desire to find safe havens becomes all-consuming for most people. For others with less risk appetite or more foresight, safe havens become core strategies to protect their earnings and weather uncertain futures long before a crisis hits.

Safe havens don’t have to necessarily be stocks or bonds, which are frequent go-to’s that a lot of traditional financial advisors recommend. They can be other asset classes and investment instruments. Many times, real estate offers such a safety valve. But with the housing crisis just over a decade ago, even that once-safe haven has shown its vulnerability.

So, to understand where investors and savers alike turn for safety, we have to look at a couple of characteristics, they search for.

What Makes an Asset a Good Safe Haven?

To understand what makes a good safe haven asset, it’s important to look at what sorts of risks an investor might seek protection from.

According to an Employee Benefit Research Institute study, nearly three-quarters of all IRAs had a significant allocation in stocks. So, it makes sense that one goal of safe havens is to protect savers from equity risk.

Equity risk is a broad term. It can mean risk of volatility in the stock market. It can also refer to the relative risk of stocks underperforming other asset classes like bonds.

To protect against these various risks in equities, a safe haven must show both stability and the ability to perform well when stocks are tumultuous.

Since the interest paid on fixed-income assets like bonds doesn’t change (fixed), higher rates mean a decrease in price. If bonds are generally seen as protection against equity risk—which many advisors would say they are—then a true safe haven must protect against equity and interest rate risk to be worth it.

The value of stocks and bonds aren’t the only variables from which a safe haven must shelter a saver. Money itself can lose value over time. Sometimes, the value of a currency can drop in a hurry, such as during a recession or other economic downturn. This value drop is inflationary risk.

If you own assets that are only valued in dollars, euros, or any other currency, your inflationary risk is something you may want to consider. And even if you steer clear of stocks and bonds completely, just the money in your bank account would be at risk from inflation. 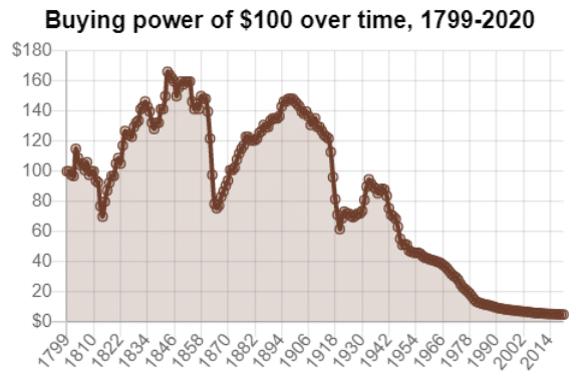 These three risks are the major ones a true safe haven asset must avoid and protect against, but by no means is this list comprehensive. There is a wide range of other risks.

Geographical and political conflicts can be problems. As governments change and new laws go into effect, the economics of an area or country can change too.

Technological change and risk are also changing the way investors are thinking. New technologies seem to be constantly disrupting whole industries and sectors of the economy. Shifts in technological trends and even in security threats create instability that can alter the long-term performance of assets. Being on the wrong side of a technological change can be a devasting financial move.

The point is that a safe haven needs to be able to counter these risks. They don’t necessarily have to rise in value much. But they at least have to offer protection from multiple risks.

Some consider things like defensive or utility stocks to be safe havens. After all, when the rest of the market hits a rough patch, we still need things like electricity, water, and even the phone lines that a utility or telecommunications company provides. But these utilities also move with the stock market, undermining their performance as a true safe haven. Maybe they don’t fall as far as other assets may in bad times, but they don’t offer a complete safe haven from equity risk.

We’ve already discussed why bonds aren’t truly a safe haven; they suffer from inflationary and interest rate risks. However, some still see a portfolio of laddered bonds with varying maturities to protect against short-term interest rate risk as a potential safe haven. The problem there is that bonds can run in very long down cycles.

Bonds have done well for decades as interest rates have fallen since the early 1980s. But before that decline started, they had climbed since the 1940s. 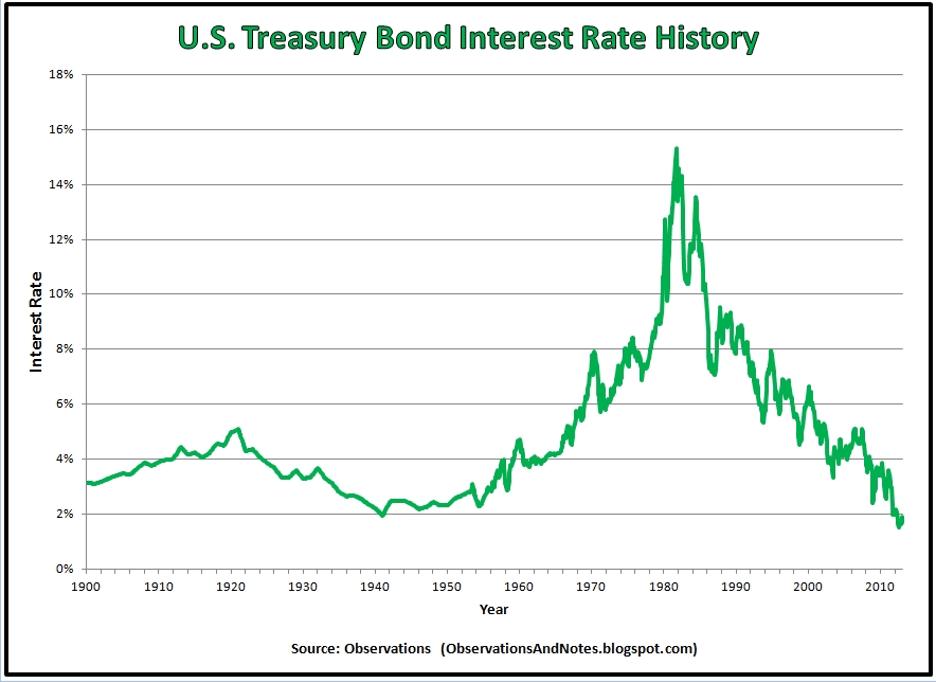 These interest rate shifts can be generational and affect bond prices for decades at a time, no matter how you ladder your portfolio.

No, there’s no stock or bond out there that can offer a complete safe haven from all of these risks. No single asset can really protect against every single possible future problem.

But diversifying your portfolio with assets that perform fundamentally differently, or even in complimentary ways, is one way that some investors and retirement savers try to protect their future. Some assets are known as being better choices than others to serve as safe havens, offering protection for savers and investors alike from many of these risks detailed above.

Why is Gold a Good Safe Haven?

Gold is often held as the safest of havens. Many buy gold as protection against risk, but they might not realize the full picture of all the ways in which gold may serve a retirement or investment portfolio.

Gold can protect against more than just equity risk or inflationary risk. It has a number of characteristics that make it an everlasting safe haven, with a history of demonstrated performance that has maintained or even grown value over centuries.

Let’s use the risks outlined above as a checklist to see just why gold is such a good safe haven.

Gold is mined and sold around the world. So, any geographical or political risk is muted. It hasn’t changed its material make-up ever. It is a periodic element. Its characteristics don’t change.

Between its characteristics and its track record, you can see why gold is viewed so often as a safe haven. But that doesn’t mean there aren’t some who find flaws even with gold as portfolio protection, centering around one particular criticism.

Criticisms of Gold as a Safe Haven – Are They Valid?

As noted, there’s no 100% perfectly safe investment instrument in the world.

Gold can and does move at times with the economy. Especially in periods of complete panic, as we saw in early 2020 for example, gold can track downwards in price—just as the very assets it is supposed to protect against move lower.

This criticism is often an “ah-hah” moment for some, as this article shows, but this argument is a bit disingenuous. Gold did initially retreat as the first wave of COVID-19 started spreading; that was part of the overall portfolio liquidation that was going on, and doesn’t capture the whole picture.

Based on just how far gold had fallen in relation to stocks, investors sold off the metal in far fewer numbers. But then it then took very little time to begin climbing even higher, making this criticism fall flat in the long term. 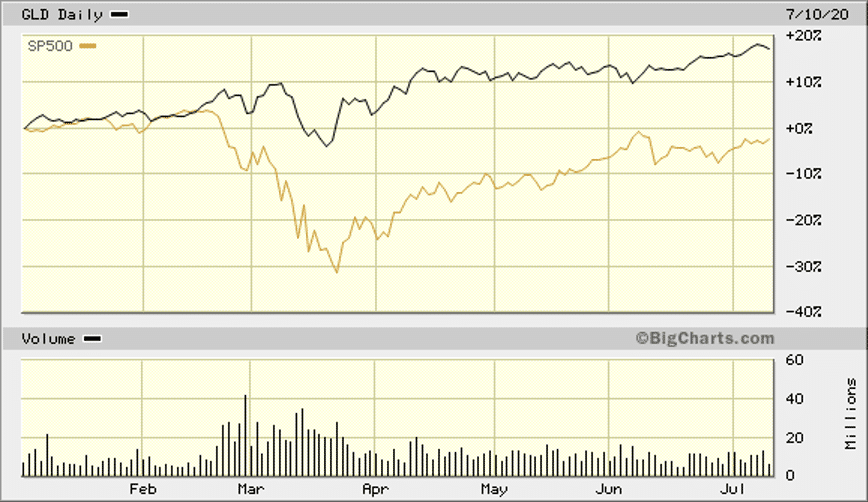 Another criticism of gold is that it can fall for periods and stay flat for even longer periods of time. That’s true: gold doesn’t just shoot straight up. But as a safe haven, it doesn’t have to.

This take on gold effectively criticizes that it doesn’t make its owners money at every point, but that misses the point on safe-havens. A safe haven isn’t necessarily supposed to make anyone rich; they are sought after to protect from losses elsewhere. Gold does that.

When stocks and bonds fall, they can devastate a portfolio. In 2008 alone, the S&P 500 lost 38.5%. And in March of 2020, the S&P 500 tanked 34%, while gold held relatively steady. Gold doesn’t need to beat stocks and bonds each year to be considered a safe haven; but when those other assets collapse, gold doesn’t. In that same year that stocks lost more than one-third of their value, gold ended up relatively flat. But that’s the whole point; it proved its worth as a safe haven in one of the worst years for stock performance in history.

When you think about safe haven investing, it’s important you are considering what risks you are hoping to avoid. Then you need to consider what kinds of assets you can own to protect from those risks. For all the major ones we know of today, gold can offer just that: an asset that may counteract and possibly even protect against major market risks.