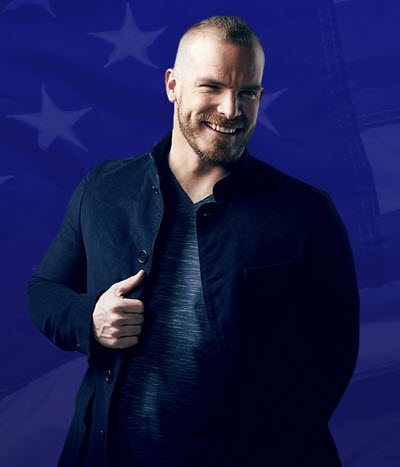 At Birch Gold Group, we believe in empowering our customers through knowledge. Graham Allen believes in that mission because he does the same thing, helping his listeners understand the consequences of short-sighted government policies. It’s easy to think of Washington, D.C. as remote and far-away, full of professional politicians so completely out of touch with our everyday lives that we seem to live in completely different worlds.

But that’s not true. Congress, the White House and the Federal Reserve make choices that have huge impacts on everyday Americans.

Both Graham Allen and his gold company, Birch Gold Group, share the commitment to inform, educate and empower.

Graham Allen is a combat veteran, a writer, a media host, philanthropist and entrepreneur. He spent over 12 years serving our country in the U.S. Army including two tours during Operation Iraqi Freedom. After finishing his military service, he found a permanent home with his wife, Elise, and three children in South Carolina.

Here’s how Graham described himself in an interview with Coffee or Die Magazine:

We live in a culture now where you’re either left or you’re right, and, unfortunately, we can’t be friends, so that means we’re enemies now. I don’t believe that, but there’s a lot of people that do. And so, because I’m very conservative — I’m a Southern-born and raised, gun-loving, freedom-loving, Christian conservative, that is who I am. Oh, and I’m a white guy at the same time. So, some people view me as the absolute worst thing that this country has to offer — I don’t think there’s any way for some people to not view me as divisive.

Based on his his profound appreciation for America and our nation’s founding principles, Graham became a celebrity in 2017 with a series of “daily rant” videos posted to social media. He got over 1 billion views and landed his own show, Rant Nation, on Glenn Beck’s Blaze TV. His Dear America Podcast is one of the fastest-growing in the nation.

Despite his famous ranting, Graham’s a pretty down-to-earth guy. He describes himself as “much quieter in person.” And he enjoys helping others in his community: “It’s more fun to me to go feed the police departments working the night shift than it is to get a 100-million-view video.”

That’s the same kind of public-spirited citizenship that led to his Veteran for Congress campaign for South Carolina’s 7th Congressional District, contesting a seat in the House of Representatives currently held by Tom Rice. He received a number of endorsements from political insiders.

By now you know we’ve partnered with Birch Gold Group. Because I believe we need to protect our money, our savings. To protect what is ours. Because inflation is a big deal.

Why? Because Graham wants to elevate the conversation. He gets emails all the time from his listeners who really don’t understand what inflation is, and the effects of massive government spending on their day-to-day lives. And that’s a problem! Graham knows that, as Thomas Jefferson put it, “An educated citizenry is a vital requisite for our survival as a free people.” It’s not enough to just say, for example, “Inflation is bad.” Graham wants to take the next step. He wants his listeners to understand the issue so they can make up their own minds.

Maybe it’s his Army background. Graham knows understanding the mission is vital whether you’re a soldier or a civilian taxpayer.

Then Graham has a confession:

I know that I, once upon a time, didn’t know what inflation meant. What volatile stocks meant. What the value of your dollar going down actually meant. What the difference between buying powers meant, and that stuff. So what I want to do is bring in someone far more knowledgeable than me, and this is my friend Phillip from Birch Gold Group.

Phillip went on to break down the effects of quantitative easing and government spending on inflation, and its most visible effects. They get into the specifics of safe-haven assets like physical gold and silver as well…

Graham Allen: We partnered with you guys, because I love that Birch Gold is very honest. It’s not a money-making scheme that you guys are trying to run over there. You guys are interested in protecting what the American people have, what they’ve worked so hard in protecting… With Birch Gold Group, explain to us what gold does, what everyday Americans should be doing with the cash they have and how Birch Gold can help them do that.

Phillip Patrick: I think you really hit the nail on the head when you said “to protect.” This is not a get-rich-quick scheme.  You don’t buy gold and precious metals as an aggressive growth play. What you do buy it for is to protect and preserve your wealth. In climates like this specifically, they’re very conducive… these problems we’ve created are a big issue for  anyone holding stocks and bonds, these traditional assets. They are actually very positive drivers for safe haven assets, for gold and silver. When stocks crash, gold and silver tend to go up. In 2008, they doubled in value on the back of the stock market crash. When inflation rises, what inflation really means is when things get more expensive over time. Gold and silver are commodities, so by definition, as the cost of living rises over time, they keep pace with it. So what they allow people to do is to protect buying power, protect those hard-earned dollars’ ability to purchase. That’s what we’re all about at Birch.

Graham Allen: So in your professional opinion, what should those everyday Americans do… What should people do who have some money saved up and want to get more information about protecting what they have? Where can they go with you guys, and what do you say to those Americans?

Phillip Patrick: The key word you mentioned there is information, right? Knowledge is power. So the more informed we are, the more we understand, the more the solutions will come. In terms of us, it’s very simple. Our job is to provide information to guide people through. We have a very informative information packet, free for your listeners. We have a lot of experts like myself available to guide people through step by step. Once you realize what’s really happening? It’s simple to see the steps to take to protect yourself. It’s never a case of panic, right? If we panic, if we get stuck in fear, we get paralyzed. The key is to stay informed, stay preemptive, and be decisive. If you do that, you can navigate through things like this.

And of course, go out and vote when the time is right.

Want to learn more? Listen to the full conversation here.

Birch Gold is proud to be Graham Allen’s gold company

We really do believe that knowledge is power. Like Phillip said, our goal is to educate Americans on the benefits of diversifying their savings with physical precious metals, whether they choose gold or silver, platinum or palladium. We believe that once you understand your options, you will act with confidence and make the right decisions for yourself, your family and your future.

We appreciate the opportunity to work with Graham Allen. His mission, educating Americans about the consequences of short-sighted political decisions, goes hand-in-hand with Birch Gold’s mission to educate and empower our customers.