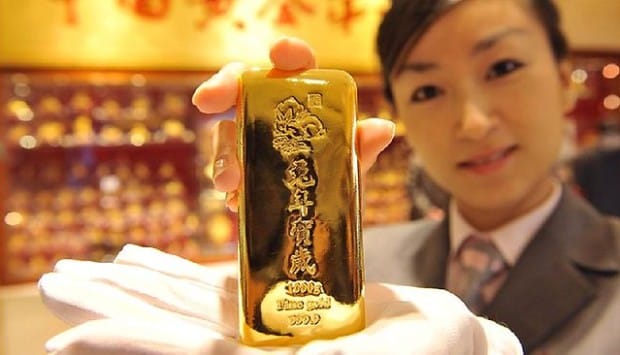 With each passing day, there is more and more speculation in the markets that China is accumulating and holding more gold than they’re letting on. China reports official reserves to the International Monetary Fund, but the nation is far from transparent on the real extent of their reserves. With just some simple math and extrapolation, it’s quickly clear that China’s demand and import numbers don’t match up to official reserve numbers. Consider the following:

This helpful infographic shows the development of the gold market in China since the 1930s.

Put all of this together and it’s clear: When China updates its official reserve numbers around April 2014, precious metals experts are bracing for an astounding jump from the current 1,054 metric tons that are currently on the books.

Whatever China is doing with gold, it’s doing it in secret or with as little fanfare as possible. Why? We can only speculate, but one theory is that they simply want to acquire as much of it as cheaply as possible, and they know that any accurate report of their massive demand could send prices soaring upward.

A second (and perhaps most plausible) theory for why China is acquiring gold in secret is that when they look at the dollar policy of the United States, they see the financial writing on the wall. They see the crucial need to diversify out of dollar assets and into something that can’t be inflated away by economically illiterate bureaucrats at the Federal Reserve and their political cronies. They’ve done the math and they know the dollar’s days as world reserve currency are numbered. They may or may not want to position the yuan to take the dollar’s place, but they do know things are about to change, and when they do, he who holds the gold will make the rules. They don’t want to be caught holding nothing but paper – and especially our paper.

Just as the Great Wall of China was built to defend against invading Mongols, the Great Vaults of China are being built to defend against invading dollars. You can have this protection too. Take wisdom from the Chinese and build a wall around your assets. In that nation alone, there are a reported 4.5 million gold savings accounts. It’s times like these that you should consider one too.

Jim Rogers to Birch Gold: Everybody should own gold as insurance
“Everybody should own some precious metals as an insurance policy. So if they don’t have any right now, I would urge them to go buy something, buy themselves a gold coin if nothing else, and see that it’s not going to hurt… First, do your homework, don’t buy gold because you heard me say it… But if people don’t own they should start after they have done their homework. And then they will probably, if they do their homework, most people will then realize, ‘Oh my gosh, I better have insurance, and gold and silver may get me through serious problems ahead.'” – Jim Rogers in exclusive interview with Birch Gold Group (link)

Central banks hoarding gold for when “the pigeons will come home to roost”
“You have to understand why the central banks buy gold. They buy gold because they want to have something real and tangible, in case there’s ever a run on their currency or some other kind of financial crisis, to keep people from freaking out. But there are some good reasons to freak out. We have quantitative easing, not just in the U.S. where it’s $85 billion per month, but around the world. The balance sheet of the whole of central banks system is now estimated to be more than $20 trillion by Bloomberg. Central banks keep buying gold because they are worried that some of those pigeons will come home to roost eventually.” – Sean Brodrick (link)

Wall Street Journal: The case for investing in gold
“Historically, the price of gold has hardly had any correlation with the price of other investment categories. Because of this, it provides an insurance policy against systemic and other risks that might affect [the majority of] your investments and savings.” – Jeff Nichols (link)

Janet Yellen knows why you should own gold
“It is an asset that people want to hold when they’re very fearful about potential financial market catastrophe or economic troubles and tail risks. And when there is financial market turbulence, often we see gold prices rise as people flee into them.” – Federal Reserve Chair nominee Janet Yellen, during Senate confirmation hearing (link)

Silver American Eagle sales hit record on back of strong consumer demand
“For the most part, record coin sales demonstrate strength on the retail side rather than institutions, who would rather not take physical delivery.” – Jeffrey Wright (link)

Gold flowing from the west to China and the rest of the east
Year-to-date consumer demand from the east is 2,167 tons. The west makes up a meager 402 tons of demand; not even one-fifth of eastern demand.