Home » Blog » Unfortunate fact: Why the “wise and frugal” savers will be punished

Unfortunate fact: Why the “wise and frugal” savers will be punished 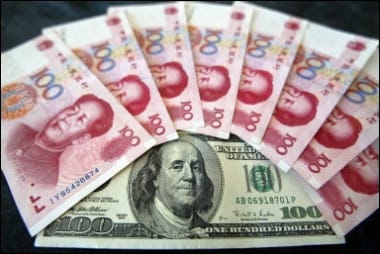 We hear in the news over and over and over again how much of our debt China owns. How many times has someone said that China is our banker? This of course implies a sense of vulnerability to the Chinese: What happens when they stop buying our debt and start selling, or when they finally get exasperated with our irresponsible inflationary monetary policy and yank their rug out from under our dollar?

Some have countered, however, that such a sell-off of our debt is very unlikely to happen, with Keith Bradsher of the New York Times being one such detractor. His reason? The Chinese are doing much the same things to their own currency, the renminbi. And in fact, they may be doing even worse to it.

Bradsher outlines China’s huge ramping up of money supply, especially in the last 10 years. He says that Zhou Xiaochuan, governor of the People’s Bank of China, puts Ben Bernanke’s destructive monetary policies to shame. Consider that since 2006, China’s money supply has tripled. Tripled! With much of this liquidity in China going into assets like real estate, Bradsher illustrates the human side to a very familiar looking a real estate bubble that has seen prices double every few years: Property owners are understandably thrilled, but with wages not keeping up with these surging costs, what of those seeking a place to live? The imbalance is unsustainable, as we Americans have figured out by now (or should have).

It’s all a part of the worldwide currency race to the bottom, with nations going up against each other to weaken their currencies as fast as possible so that their exports become cheaper and they’re able to sell more. But of course this only encourages reciprocation from other countries, and so we all take turns being the least valuable currency in this twisted little game of money printing.

The ability to manipulate an economy this way, rather than actually focusing on better outputs, is what comes about when currency is based on nothing. In other words, without a commodity-backing (like gold) to constrain a nation from simply printing more paper money, printing is what they eventually do. The urge is irresistible and the rewards are immediate and tangible.

But what’s the damage of playing this twisted little game? It’s long-term and underlying. Eventually, the currency returns to its intrinsic paper value – zero. When…???

Fiat currencies – that is, currencies backed by nothing – have a life expectancy. The average is just 27 years. The greenback, in its current pure fiat state, is just over 42 years old, so it has already had a good, solid run. But it is long overdue for a retooling of some kind. And that’s not us making some outlandish prediction – that’s simple historical fact, merely something we should expect based on past events and current dynamics. So why does that sound irrational to so many people? Things have been coming apart at the seams for some time now – all you have to do is look.

Here’s the unfortunate reality of what’s to come for many (hopefully not you): You work hard all your life and build up a store of savings in fiat currency. It’s the “wise and frugal” advice you’ve received since school. But then the currency goes defunct. What about all that “value” you saved? For all intents and purposes, it has vanished.

Here’s the fortunate reality for the few who make out well when currencies go defunct: They’ve seen what’s coming and have traded in their currency for tangible goods, whether it be real estate, artwork, jewelry, furniture or (of course) gold. Anything but currency – the exact opposite of all the “wise and frugal” advice you always heard.

It is not fair that savers will be punished, but when a currency collapses, that’s precisely what happens. Continuing to spend and borrow is something fiat currencies push us to do, or risk losing it all.

Currency crises are messy. Fortunes are made and lost on them. The markets go chaotic. But amid the frenzied chaos, there is one constant, one historical truth: A fall back to the tried-and-true consistency of precious metals. That’s the way it has been for thousands of years. So ask yourself: Why would now be different?

You can save yourself from who-knows-what by having the fall back already in your portfolio. Call us to get started – or click here to get a free gold investment kit.

This is why gold and silver are being snapped up by “strong hands”
“Too much government debt means the currency will be debased to lessen the government’s debt burden, which has happened time and again throughout monetary history. So it is really not a surprise that the precious metals have started the new year with meaningful strength… Gold is probing overhead resistance above $1250. Silver is probing overhead resistance above $20. These are key areas. Once these levels are hurdled – and I expect they will be soon – it will be more evidence that the precious metals made important lows this past June, more than 6 months ago. So gold and silver continue to build a huge, deep base of support. Physical metal is being accumulated at bargain basement prices by strong-hands, and people are getting their money out of the banking system and putting it into something safe with no counterparty risk.” – James Turk (link)

For the long term, an investment in gold is “unparalleled”
“The longer-term picture (for gold) is extremely bright. The picture in China itself is phenomenal. Right now China is, in terms of final demand, consuming virtually 100% of non-China global production of gold. This is an amazing thing when you think about it… I think for people who have enough money to live on, they’ve got cash and other assets they can draw on, that are looking for a deeply undervalued investment that has potentially a very high payoff over the next 1, 2, 3, 5 years, gold and precious metals are, in my book, unparalleled. That’s how we’re set up. This is something we’ve researched very carefully, and this is where I’ve got my own money.” – William Kaye (link)

China may reverse current gold price “at a stroke”
“China with its huge appetite for accumulating gold, coupled with its apparent distrust of the potential effects of the huge U.S. debt situation on the likely long term future of the dollar vs the renminbi, together with its potentially enormous financial muscle, is perhaps the one entity which could completely reverse the current gold price downtrend at a stroke. Evidence is accumulating that current Chinese gold consumption in the run-up to the lunar New Year on Jan 31st is actually exceeding total global new mined gold output over the current period. There is strong speculation, supported by numerous reported statements at recent conferences by Chinese academics and officials, that China is heading towards attempting to totally dominate global gold holdings and by so doing hugely enhance its geopolitical and geofinancial position. And if rhetoric is replaced by statistical confirmation then the whole gold ballgame could be turned on its head. It is coming up to five years since China last announced an increase in its gold reserves and 2014 could well see it do so yet again and some see a revised reserve status catapulting it from the World No. 6 holder of gold to perhaps second place, behind the USA, or – some speculate – to the world no. 1.” – Lawrence Williams (link)

Gold coin and bar shortages likely to lead to rationing
“The extraordinary demand for precious metals coins following the 2008 global financial crisis caught the minting industry by surprise, resulting in never before seen coin rationing and shortages. It seems not much has changed, with recent reports that the UK Royal Mint ran out of 2014 Sovereign gold coins due to ‘exceptional demand’, as well as the continuation for over one year of an allocation program first put into place early 2013 by the U.S. Mint on its ever popular silver Eagle bullion coins… The fact that the UK and U.S. Mint are having supply issues on a few of their product with metal prices at these low levels is an indicator that as prices rise and (re)attract investor interest, shortages and rationing may become a reality of coin buying life again.” – Bron Suchecki (link)

Growth of monetary base under QE practically vertical 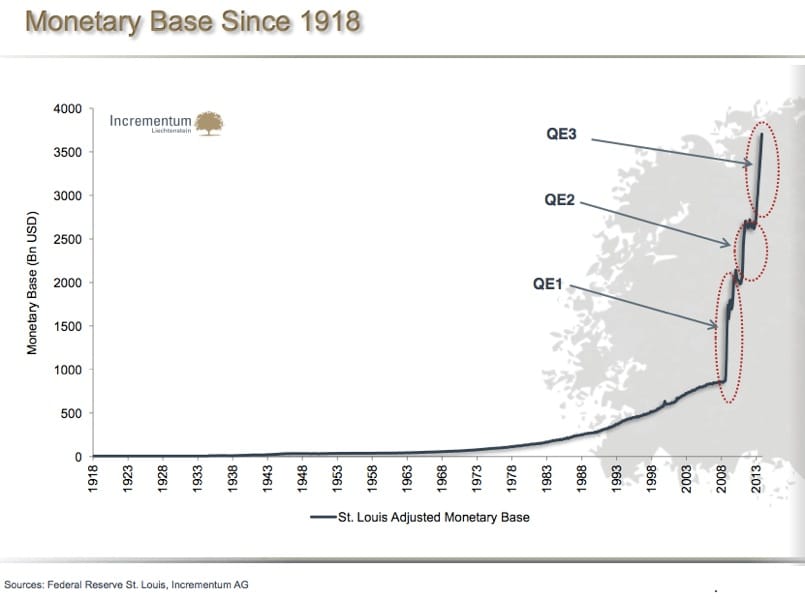