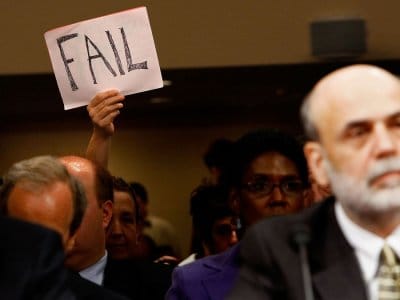 The Federal Reserve is already telegraphing that the taper will not go well.

In a speech on Friday, Ben Bernanke tempered praise of his tenure as Federal Reserve Chair with acknowledgment that economic recovery “clearly remains incomplete” – which is quite an understatement. In fact, with the markets having been so distorted with $4 trillion in money that the central bank has essentially conjured from nowhere, we haven’t even had a chance to begin recovery in earnest. But Bernanke & Co. see what they want to see, and Bernanke sees that:

Claiming that Quantitative Easing has brought about financial healing is like putting stage makeup on the gangrenous parts of a diseased limb and then claiming it is on the mend. As we’ve discussed before, the bankruptcies are necessary; until then, the pain has only been deferred. The gangrene has been spreading beneath the veneer, but to Bernanke and his disciples…

The limb is still there and it looks great, so let’s breathe a sigh of relief! Let’s pretend that actually realigning the economy with new paradigms isn’t really necessary. Let’s just make sure the status quo stays in place and is flush with cash so we can call it a recovery!

Bernanke declares that there is greater balance in the housing market, but how can you know what true balance looks like? We know what bubbles look like (they look like this) but we will only see balance when the market is allowed to equilibrate. That will mean pain for some people. Again.

What is especially frustrating is to hear Bernanke acknowledge the shortcomings of the Fed’s actions during the buildup in 2006. Yes, he acknowledges that they missed all the signs of the impending crash, and “that the boom and bust left severe imbalances that would take time to work off.” Yet he and the Fed are doing the same sorts of things all over again today! It’s clear they haven’t learned anything, yet apparently we’re supposed to trust that this time they know what they are doing; not like, you know, last time.

All of this has been setting the stage for massive inflation.

Not everyone at the Fed is blind, however. Dallas Fed President Richard Fisher has long been a Doubting Thomas on QE and recently stated his fears that Bernanke has painted the Fed into a corner. Hawkish Philly Fed President Charles Plosser stated at the same meeting Friday that the Fed may have to be “aggressive” in lifting interest rates, thus rattling the markets. But once you turn the spigots on, it is hard to turn them off. It is interesting to listen to what some at the Fed say in calling for higher interest rates, but will the bank any time soon put its collective money where just a minority of its mouths are, especially with dovish Janet Yellen soon taking over as Chair? Calling such a reversal of course “doubtful” may be a lock for Understatement of the Year – and that’s even though we’re not yet a full week into 2014.

Of course none of this should be a surprise to you, not if you watched what Jim Rogers predicted in his recent interview with us. If the tapering of QE ends up going down as he outlined to us, many of the changes of late – such as the perceived strengthening of the dollar and weakening of gold – will merely be blips on the radar. Watch the long term. Gold has been on the rise as of late, closing last week at $1234.50, up $20 over the previous Friday. Have you missed the bottom?

It is clear that relying on dollars and paper assets is very risky right now. 2013 was great for the stock market. The bubbles are always fun on the run up, but to many observers, it sure looks like the burst is coming in 2014. Gold and precious metals can keep you from being wiped out by all this irresponsibility. Get started today – all you have to do is click here to request an investment kit – there is no cost or obligation to you.

Gold’s “SOS moment” from 2013 makes it bullish for 2014
“Everyone loved gold up until 2011, and everyone hates it now. The contrarian in me says that’s why its worth watching carefully. The catalyst likely needs to be negative real rates, and with inflation expectations ticking up a bit, the ‘Great Convergence of 2014’ between reflation and U.S. markets may be precisely why gold’s SOS moment gets heard.” – Michael A. Gayed (link)

China preparing for gold as “central player” in a new reserve currency
“You have to ask yourself this about the Chinese, in such dramatic contrast to us, why are they encouraging their citizens… to buy gold? One reason could be that they want their citizens to (eventually) turn in some of their gold, and [the Chinese government] will turn it into currency for them. That’s great. They are already setting up the mechanism for a gold standard. The implications here are just phenomenal. You have to believe the Chinese have completely lost their minds in order not to believe that they are looking at gold in the multi-thousand dollar range. That’s the only way this makes sense. They are looking at gold as a central player in a new reserve currency. Who in the world would want (to hold) the dollar from a foreigner’s perspective?” – Stephen Leeb (link)

Rickards: China setting up gold for “huge technical rally”
“China is redefining the global gold market, they’re making the Singapore Gold Exchange the center of world gold trading, they’ve turned their back on the London Bullion Market Association… They’re basically acquiring all they can through overt means that we see in the course of Hong Kong as well as covert means, you know, smuggling it in through military channels. So it’s a fascinating play and it’s set up for a huge technical rally, doesn’t mean it happens tomorrow, but at some point you’re going to want your gold and there’s not going to be any around.” – Jim Rickards (link)

Black market for gold forming in India
“For this country of one billion people, gold is, has, and always will be money; a reliable store of wealth in an unpredictable world… Imports have been declining as the government has been trying to hose down this love affair and bring its current account deficit under control. Bullion shipments have been restricted and taxes increased, and now new laws are being considered aimed squarely at weddings… But it’s not easy to legislate against love. There is evidence that restrictions are fueling a black market for the yellow metal… By trying to discourage gold buying, India’s government is trying to roll back centuries of tradition and an abiding love of the world’s only enduring currency.” – Paul Allen, Bloomberg (link)