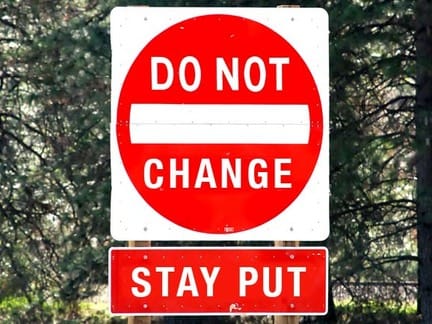 Last week, the Federal Reserve proposed placing minimal liquidity requirements on big banks, supposedly to help them weather (coming?) financial storms with more easily accessible cash on hand. This probably would be a good thing for our fragile fractional reserve banking system, as it means less money could be lost by banks that are still “too big to fail”. Incidentally (and probably not so coincidentally), this could also help to stave off a massive unleashing of the newly created cash that the Fed has been feeding banks through its program of Quantitative Easing; an unleashing that could trigger hyperinflation. Could this be the real reason the Fed wants to enforce this right now? Surely they must know they cannot create $85 billion a month from thin air without eventual repercussions.

It is good to be the government. After all, what company wouldn’t force stockholders to hold or buy their stock if they could, especially if they sensed a massive sell-off was coming? Makes you wonder what they are up to and what they know.

Senator Rand Paul certainly wonders what they are up to and is continuing his father’s crusade for a full and meaningful audit of the Federal Reserve. Many Americans are still surprised to learn that most of what the Fed does, it does in secret. Not even Congress, who chartered the Fed, knows the totality of what they are doing to our currency. Transparency and accountability is crucial, especially for an organization with as much power and importance as the Federal Reserve. And yet, the Fed has fought tooth and nail every step of the way to keep their operations secret. This is simply un-American.

As a U.S. Senator, Rand Paul has an ace up his sleeve that his father, as a U.S. Congressman, did not have: he can block Yellen from being officially nominated as Fed chair until a vote is held on The Federal Reserve Transparency Act, a version of the legislation that was the focal point of his father’s last years in office. And that is what he has indicated he intends to do. The bill currently has 19 cosponsors in the Senate. An additional 21 senators, for a total of 40, would need to stand with Paul to prevent cloture.

Can Paul get to that magic number of 40 U.S. Senators to demand an audit of the Fed? Or are there possibly 60 Senators who would vote the other way, and in favor of the status quo: of Fed secrecy, of dollar printing with impunity, of the continued hubris that could eventually cost people all of their life savings?

Critics of Fed transparency argue that the Fed should not become politicized, yet anyone who is paying attention knows it already is. Just remember what happened when Larry Summers was floated as the next Fed Chair. The fact that the president nominates the Fed Chair has always made the Fed vulnerable to politicization. What is the Fed hiding from us?

Paul’s fight is a noble one, but not an easy one. As worthwhile as the effort is, it is likely that he is merely tilting at windmills; Washington loves to cling to its status quo. The only protection Americans down on Main Street may have in the midst of all this obfuscation is to simply prepare for any possibility and diversify into precious metals. Call us and let us help.

“Abandon the dollar now; U.S. is a laughingstock”
“In a nutshell, we are back to business as normal where the U.S. government spends way too much money; which we have to borrow on the global market. We have no realistic way to pay it back and even with a ‘shrinking’ rate of deficits, the situation is not sustainable. Gold is the natural vehicle to counterbalance this behavior and is going higher once again.” – Jeffrey Wright (link)

DC hasn’t avoided the debt crisis yet… and that’s why gold should rise
“Gold moved from $300 to $1,800 not because investors believed the government would hold the line on debt, but because they believed that the U.S. fiscal position would get progressively worse. That is what happened this week. By deciding to once again kick the can down the road, Washington did not avoid a debt crisis. They simply delayed it. That is why I tried to inform investors that gold should rally if the debt limit were raised.… In fact, the Chinese may finally be getting the message. Late last week, as the debt ceiling farce gathered steam in Washington, China’s state-run news agency issued perhaps its most dire warning to date on the subject: “it is perhaps a good time for the befuddled world to start considering building a de-Americanized world.” Sometimes maps can be very easy to read. If the dollar is doomed, gold should rise.” – Peter Schiff (link)

Rickards: Gold will “race way ahead” in one of these two ways
“If you’ve tried everything, if you want inflation, and you’ve tried everything to create it, so you tried money printing, cutting rates, currency wars, Operation Twist, QE, forward guidance, nominal GDP targeting, you’ve tried everything, you still didn’t get the inflation. There’s one thing that always works, which is devaluing your currency against gold. So there could come a time when deflation gets so bad that the Fed and the treasury actually raise the price of gold, not to enrich gold investors, but to get close to generalized inflation. Because if gold goes up, silver and oil will go up along with it. It’s exactly what happened in 1933. So that’s one path. But the other, perhaps more likely path, is that the Fed just keeps printing money and finally succeeds in changing behavior, velocity of the turnover money picks up and inflation goes up on its own. Then gold will race way ahead of that. That’ll just change the psychology. My advice for gold investors today is to kind of do what the Chinese do: just buy the dips.” – James Rickards (link)

“Gold is a hated item” – and exactly why you should buy over stocks and bonds
“I feel that it’s time to be increasingly careful regarding the stock and bond markets. Consider this: Since its 2009 low, the main stock averages have doubled. So does it really make sense to buy stocks in an area where the stock averages have doubled, and where the Dow and the S&P sport dividend yields of less than 2.5%? It’s true that money managers are desperate to create some income, and they are forced to deal with the only place where there’s action. But that is not true of you and me. We can enjoy the luxury of sitting safely on the sidelines while the markets wobble to and fro. In the meantime, gold is a hated item. Sentiment towards gold is comparable to sentiment at a bear market bottom. Therefore, if you have to spend your money, I prefer gold at this time to stocks and bonds.” – Richard Russell (link)

Upon confronting U.S. budget issues, dollar to go down, gold to go up
“For the U.S. government to address its budget issues, it will have to spend less on programs and shrink in size within the U.S. economy. If this happens the U.S. dollar has no other direction to go but down… This U.S. budgetary issue is key to the whole gold scenario.” – David Lennox (link)

“Some extra oomph”; precious metals to benefit from no Fed taper and dollar weakness
“It’s pretty clear with the shutdown lasting over two weeks and the negative news with the non-farm payrolls that it would be a brave Fed to announce tapering at this stage. The potential for tapering to be delayed plus the residual weakness in the dollar might give some extra oomph to precious metals.” – Jonathan Butler (link)

99.9% drop in U.S. dollar purchasing power when measured against gold
In 1718, $1,000 bought you nearly 52 ounces of gold. Today it buys you less than an ounce. From Tekeo Da Silva: “In the short-term anything can happen price-wise, but again, over the long-term, protecting one’s purchasing power is warranted. After all, if the central banks are doing it – why can’t we?” 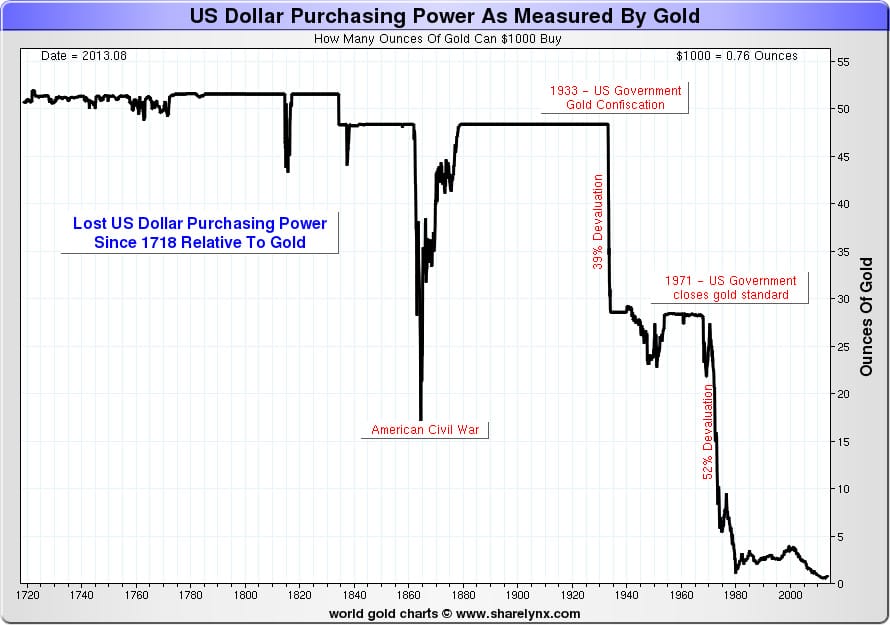