Home » Blog » Flipping the script: Gold is forever, but the Dollar…?

Flipping the script: Gold is forever, but the Dollar…?

Gold and silver will win.

Maybe not today, maybe not tomorrow, or next week, or next year. But ultimately, their victory is inevitable. The reasoning is simple: For thousands of years, as societies have risen and fallen, as currencies have come and gone, gold and silver have been one of the few constants.

Yet the media is stubbornly compelled to measure their value against the U.S. Dollar, a currency whose fate was sealed from the very moment it was conceived. (That’s assuming, of course, that the Dollar will behave like every single fiat currency before it. We think it’s a safe assumption to make.) And it appears as though the Federal Reserve is eager to bring on this demise as soon as possible, what with the 85 billion new Dollars it floods the economy with each month.

It’s already happening in Japan. With the Bank of Japan’s aggressive program of easing, just like the Fed’s quantitative easing, the value of the yen compared to other major currencies in the global economy has plummeted in recent months.

As Michael Lombardi says on Yahoo, “If we keep up with all this money printing, the U.S. dollar may eventually look the same.”

So to many of those in the media, we say enough with the gold and silver bashing. Gold and silver have held their value for thousands of years versus any currency; why should we expect anything different now? So let’s flip the script and put the Dollar under the microscope. The New York Sun puts it best:

“The value of gold is, in practical terms, constant. We prefer to talk about the value of the dollar. That’s what does all the changing… It is gold, not the dollar, that is the measure of value.”

Ron Paul isn’t worried about falling gold prices
“I don’t see the price of gold as the issue as much as the value of the dollar. The value of the dollar is a subjective thing, it comes and goes, and there are a thousand different reasons why the values go up and down. There’s nothing unusual about that market.” – Ron Paul (link)

The enduring glow of gold
“The gold bull market will end when an inflation crisis pushes central bankers around the world to tighten aggressively.” – Andy Xie (link)

China moving to dominate the world with gold purchases
“It’s only a matter of time before the Chinese back the yuan with gold… Their currency is flying and they are importing as much gold as they possibly can. All of this spells incredible upside for gold. Hang on to your gold, and buy more if it comes down in price. And especially buy silver. When gold takes off, silver will be gold on steroids.” – Stephen Leeb (link)

Cartoon of the week 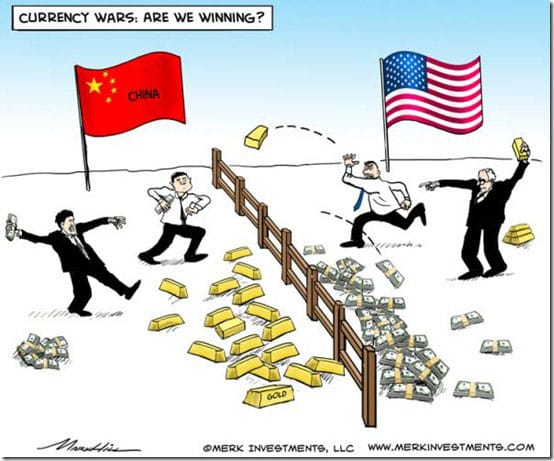