Home » Blog » That paper in your pocket? Here’s what the global dollar dump will do to it

That paper in your pocket? Here’s what the global dollar dump will do to it 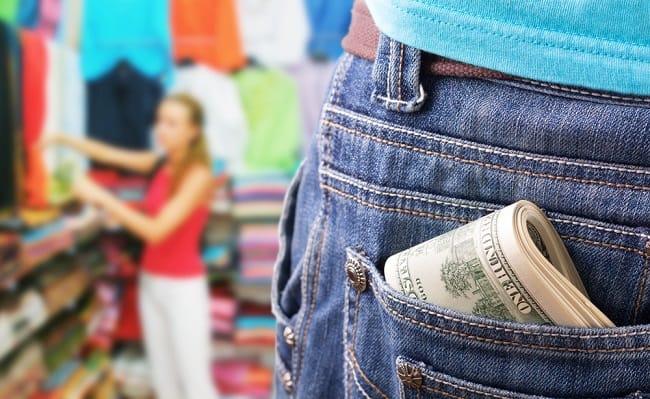 There was more volatility in stocks last week as early record gains reversed into small losses by week’s end. Analysts laid blame all over the place: It was due to a bad report from Nike… no, it was Putin’s fault… no, it was Janet Yellen… It’s the type of wobble we are getting used to lately, and what we’ll probably see more and more of.

There’s only one certainty in the markets these days: Nothing is certain anymore. The market hates that.

The central instigator in this most recent wave of uncertainty is Russia, and the dangerous game that the United States government is playing with them. While it is outside the purview of Birch Gold Group to determine if an election was fair or not, the fact remains that officially, Crimea voted overwhelmingly (suspiciously overwhelmingly) to join the Russian Federation. The act of self-determination of a foreign people is something the United States ought to have very good reason to thwart. Instead, the administration has instituted broadening sanctions against Russia, and specifically against Vladimir Putin’s inner circle… for now. Putin is vowing to retaliate against our sanctions with his own, but he has also said he has no interest in escalating the situation.

What may be connected to all of this is the recent record sell-off of U.S. treasuries held for foreign central banks at the Fed. The drop looks like this, but it is not revealed who exactly withdrew all of this money. Many signs point to Russia. With sanctions in place and possibly more to follow, and given Putin’s recent threats of retaliation, there’s good reason to point a finger at the Kremlin. Moscow’s account balance was previously $132 billion, so with some give or take in other countries’ accounts, the $106 billion drop still points to Russia. We don’t know for sure. And we also don’t know if they sold it all or simply moved it.

In any case, $132 billion is not enough to seriously damage our economy on its own. What’s significant, however, is that it’s just the latest indication of global trends away from the dollar. China also has been selling off their dollars rather than buying more. Our government gets many benefits from the dollar’s reserve currency status and is desperate to hang on to that. However, the rest of the world must be getting weary of the clowns we keep putting in office and the crazy amount of power they have. Annoy the U.S. president and your credit card gets frozen? Sadly for Americans, the way for other world leaders to get around that vulnerability is to dump the dollar.

Imagine if China, Russia, Iran and others team up and create an economic zone and their own oil exchange traded in something that is not dollars? The petrodollar system and the reserve currency status of the dollar would likely begin to crumble. Without the rest of the world to export our inflation to, our government would have to figure out another funding source or find a way to live within its means. Either option would mean a difficult and painful economic shift for Americans as the dollar would plummet in value.

Historically, in times of turmoil like this, when currencies collapse and global dynamics are in flux, gold has preserved the wealth of those who have held it. It has made an excellent hedge in the past against inflation and loss in other areas. Call us or simply click here for a free kit, and let’s get it working for you too.

What do Russia and China know that you don’t?
“Investors may not be able to change this dangerous state of the world, but they are not helpless when it comes to preserving wealth. A modest allocation of investable assets to physical gold will help to preserve wealth in the face of financial war or unexpected catastrophic outcomes. Gold is not digital, cannot be wiped out by hackers, and is immune to crashing stock markets and bank failures. Russia has increased its gold reserves 70% in the past five years. China has increased its gold reserves over 200% in the same time period. Do they know something you don’t?” – James Rickards (link)

Here’s how Russia fears could spur gold higher
“Special factors such as unrest and currency turmoil in several emerging economies have certainly played a role, as have the recent tensions between Russia and Ukraine and the threat of escalation of the conflict on the Crimea peninsula. This is boosting the demand for gold as a safe haven.” – Commerzbank analysts (link)

Lack of physical gold could push prices “dramatically in a very short time frame”
“I think the real Achilles heel of the paper market is that there is overwhelming physical demand from China and other sources. Recognition of the lack of physical, especially to back all of the paper products, could really push this thing dramatically in a very short time frame.” – John Embry (link)

Failure of China’s banking system is “just the gift” gold investors have been waiting for
“The unwind of China’s shadow banking system, while negative for all non-precious metals-based commodities, may be just the gift that all those patient gold (and silver) investors have been waiting for. This of course, excludes the impact of what the bursting of the Chinese credit bubble would do to faith in the globalized, debt-driven status quo. Add that into the picture, and into the future demand for gold, and suddenly things get really exciting.” – Zero Hedge (link)

Compared to gold, silver is “relatively cheap”
“We expect the price of silver to reduce its under-valuation in relation to gold in the course of the year, assuming that industrial demand from the industrial countries will revive and no headwind will come from China. Furthermore, silver is relatively cheap compared with gold, which should continue to support investment demand.” – Commerzbank analysts (link)

How gold performs during FOMC weeks
“What is more confidence-inspiring in the Fed’s ability to manage the world and the continued dominance of the U.S. Dollar as global reserve currency than a falling gold price… and when better to show that than FOMC meeting weeks… welcome to the centrally-planned world where the announcement of ongoing trillions in fiat dilution constantly crushes the price of undilutable money.” (link) 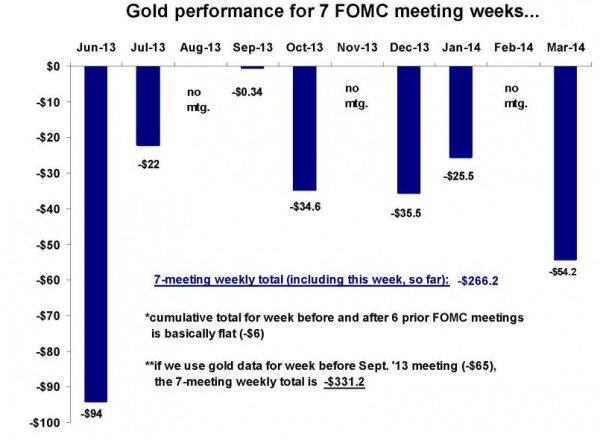