Gold demand surges; what exactly does the “smart money” know? 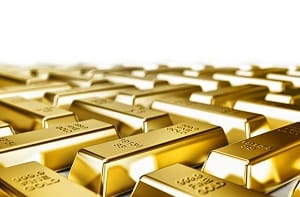 The past month has brought more evidence that the “smart money” among investors sees dips in the price of gold as a much anticipated buying opportunity rather than a reason to panic and sell. Take, for example, recent reports that the U.S. Mint is poised to break its all-time annual sales record for American Gold Eagle coins.

Though October is historically a robust month for gold sales, this surge in gold bullion purchases can be credited to the recent government shutdown and fears about government stability. Recent happenings at the Federal Reserve are also spooking investors on the dollar. The last two FOMC meetings have begun with rumblings that Quantitative Easing could taper but ended with decisions to continue inflationary measures until the economy improves. This is a little like promising to continue the beatings until morale improves. The “smart money” is not seriously wondering when QE will taper… but when it will escalate.

Thus, the “smart money” isn’t seeing recent dips in the price of gold as evidence of frothiness; it isn’t rushing out to sell while it can. Instead, it’s holding what gold it has and, if anything, it’s buying more gold at what many consider to be sale prices. And it’s the same story with silver: Due to overwhelming demand, the Mint has announced that it will suspend sales of its 2013 American Silver Eagles in the coming month.

Demand is not abating because of a correction in price. The Twitter IPO might have worked that way, stocks might work that way, but things like televisions, furniture and gold coins do not. In fact, when stores cannot keep their shelves stocked in a particular good, they raise the price; simple economics dictates that that is what will eventually happen with gold and other precious metals.

Which brings us to the most important point we can make about gold as an investment: Gold behaves differently than other investments, so it is owned for entirely different reasons. Gold is real. 70 million shares of Twitter are imaginary, basically, just a “promise” on a piece of paper. Gold is insurance. It will never be worth zero. Someday, those “promises” for shares of Twitter will be.

Put something lasting in your portfolio, that braves the ups and downs of the market, that insures you always have something tangible to fall back on.

Ron Paul: Gold’s long-term trend is way up, this is a “very good time to buy”
“If people look at it long-term, you know, from when the Fed started when it was $20 an ounce up to the time it went up $1,900 an ounce, you know, that’s more of the trend. Of course now it’s down. Instead of people arguing that it’s too “expensive”, I would think people who are in it for the long term, it looks to me like this would be a very good time to buy.” – Ron Paul (link)

How to be your own central bank
“(1) Begin to diversify your holdings outside of the U.S. dollar because Federal Reserve tapering at some point in the future will have deleterious effects on dollar holdings. (2) Own some gold as a reserve of safety and value-protection against fluctuations in the US dollar. (3) Accumulate your store of gold slowly over time. (4) Never disclose how much gold you own and NEVER sell it. (5) If you are ever asked direct questions about your ownership or intentions on purchasing gold, speak but don’t say a thing.” – David Franklin (link)

Why gold? History doesn’t lie
“I ask you to remember the lessons of our forefathers. Remember that gold has held its value over time with remarkable success. It was valuable in the time of ancient Greece and Rome, through the Middle Ages and into the Enlightenment, and up to today. Gold is also special because it is money. It’s money that actually holds its value when a government misbehaves. When Adolf Hitler destroyed Germany during World War II, gold, unlike fiat currency, held its value. Better yet, gold is easily transportable and nearly universally accepted for purchasing goods and paying debts during times of incredible distress. So, I encourage you to walk a different path from most investors. Buy some of the gold the so-called brains of Wall Street have put on sale. It will hold its value even when our government and the Federal Reserve misbehave by creating too much fiat money, and you’ll be happy you have insurance against the government.” – Floyd Brown (link)

Time to “cash out” of the dollar
“Who should investors believe about gold? Wall Street bankers who directly benefit from asset bubbles created by the Fed’s inflationary stimulus? No, it’s time for individual investors to leave the table and redeem their chips. Just remember – the longer you wait to cash out of the US dollar, the less you’re going to get for your winnings.” – Peter Schiff (link)

China’s “insatiable appetite” for gold to lift price to historic highs
“A decline in the greenback’s value and international prestige may or may not be in the cards. So, too, might troublesome inflation, a collapse on world equity markets, or another financial crisis of some sort. But these are not necessary prerequisites for gold to resume its long-term price ascent. Indeed, notwithstanding the possibility of further gold-price weakness in the next year or so, I am confident China’s insatiable appetite for the yellow metal can single-handedly lift its price well above its historic high.” – Jeff Nichols (link)

Who needs gold, really
“Gold ownership yields security for the investor, the type of security a person seeks from insurance. It is the only physical form of insurance which both exists to counterweight your investments in bonds and stocks, and which is also a liquid, easily traded asset. Gold is also non-correlated with those more “mainstream” markets. Meaning that its price moves independently of where other investment prices are heading. So the goal for most investors in holding gold is first as a safety net for their other assets. This metal has held value for thousands of years, and will hold value for thousands more.” – Adrian Ash (link)

Indian silver imports on pace to hit record high
With its government placing strict restrictions on gold imports, Indians are flocking to silver. Some estimates have them taking up all remaining surplus. 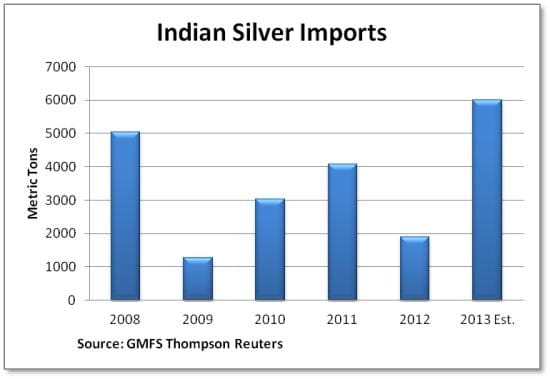