Home » Blog » Gold: The “eternal” store of wealth for you and your loved ones

Gold: The “eternal” store of wealth for you and your loved ones 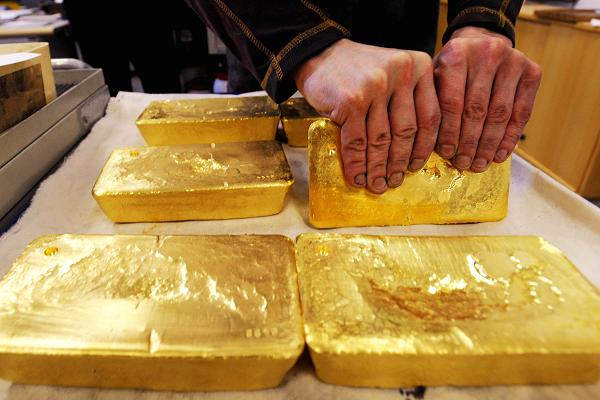 Although we start this week’s Market Update on a down note, stick with us. For on this holiday season, it ends cheery…

With the market accepting the latest “official” figures on GDP and unemployment at face value, with most shrugging off last week’s news from the Federal Reserve that it intends to begin tapering Quantitative Easing, it appears that stocks will round out the year on a high note. If the “official” figures say we’re strong, if the Fed says we’re strong, then we must be strong, right? GDP in the third quarter has been revised up to a booming 4.1% – the most since 2011. This would be great… if only we didn’t know any better.

Earlier this year, GDP calculation was revised (yet again) in such a way as to boost the figure from its protracted puny levels, with Hollywood royalties and revenues from scientific research and development being added to the equation in new and twisted ways. The revision was to take effect starting this past July, and here just in time for Christmas, we have a big and sparkly GDP number to toast.

Perhaps it will lift some spirits and encourage some holiday shoppers to be a little less Scrooge-y these last few shopping days, which would offer some hope for worried retailers. Far be it from us to point out that per more straightforward legacy accounting measures (such as provided by Shadow Government Statistics), GDP is still shrinking at around 2%. But let’s put that aside for a moment and just be happy that the Fed has come up with sufficient reasons to backpedal on its policy of blowing up the economy full force, and instead will continue to blow up the economy just ALMOST full force. Be of good cheer, friends.

In any case, the same manipulations that create good optics for the Federal Reserve are right now also good for believers in gold. Those who don’t truly understand gold’s purpose will buy and sell it on the news of each day, trying to follow recent trends as if it were just another stock – but we don’t need to tell you that that is not gold’s highest and best use. Until one really understands the value of gold, its time-tested value cannot be appreciated or realized. Right now, for impermanent reasons, gold is on sale! We’ve been saying this a lot recently, but today we feel it as strongly as ever. If you read our quotes in the “In the news” section below, the experts agree: Gold is poised to shoot up, up, up next year and in the years to come as its long-term trend continues.

Over what period of time is this “long-term trend”? Try century after century after century; that’s how long gold has been money and a store of wealth. There is no reason to believe that will ever change, especially not in light of ever increasing demand, especially as of late. Precious metals are lasting and tangible. They are an asset you can hold in your hand and in which you can have unmatched confidence that you will be able to pass its value onto your loved ones. (In fact, Jim Rogers told us he aspires to exactly this, saying, “I hope that my daughters own my gold someday.”) Companies and stocks come and go. Ultimately, when you own a stock what do you have other than a blip in an account? What will that be worth a couple of decades (if not next year)? Anything? While diamonds are forever, gold is for eternity. Add something eternal and rock solid to your portfolio this year while there is still time.

May your holidays be warm and happy, and filled with the love of friends and family.

In observance of the holidays, our offices will be closed on December 24, December 25, December 31 and January 1. We wish you a safe and festive season!

Gold: “The only store of value that has lasted through every age of man”
“Quantitative Easing is starting to have less of an ability to generate economic numbers. The great inflection point where Quantitative Easing fails to generate any economic benefit can’t be too far off. At that point, currencies will collapse and gold and precious metals will rise and dominate. That will defeat the futures market for gold and silver and let the physical demand drive the price. That’s when gold is going to sail through $2,000/oz… I love gold and silver in the long term. It’s the only store of value since the beginning of recorded history that has lasted through every age of man. It’s the only one. All paper currencies have ultimately failed through the abuse inherent in hyperinflation. We are in massive hyperinflation now, so one would argue that we’re on the brink of the expiration of the viability of paper currencies in this particular age and gold and silver will return as the primary stores of value. It’s just a matter of time.” – James West (link)

Why today’s prices represent an “exceptional buying opportunity” for gold
“Assuming the U.S. dollar will partially or totally lose reserve currency status means that gold would reemerge as a monetary metal and that the U.S. see major economic changes, including surging commodities prices, with gold on top. I see gold’s recent sharp and admittedly frightening fall as an exceptional buying opportunity…” – Stephen Leeb (link)

Gold to “respond well” to beginning of taper
“What the gold market has not had is any real clarity [from the Federal Reserve]. And with some definition of what and when and how much, I think the gold market could actually respond positively to the beginning of taper. This may sound counter-intuitive, but we’ve been creating more liquidity in the last year or two via monetary policy than the world has ever seen, and yet gold has traded off. Counter-intuitively I think we could begin to see a recovery, with $1,200 being the lows put in, potentially decent pricing in 2014. … You have the two markets which are very price sensitive. When you see round numbers like $1,200, $1,150, $1,100, these are numbers where both the Indian market and the Chinese market come alive … I would expect to see more Indian buying and certainly Chinese buying if we do see lower prices.” – David McAlvany (link)

How physical gold will win the war versus paper gold
“For many commentators there are two distinct camps in the gold market: investors in bullion and speculators in the paper market. With the two markets pulling in different directions some dealers think it is only a matter of time before derivatives fail completely and the price of gold will rocket on physical demand.” – Alasdair Macleod (link)

Is this China’s ultimate play for gold?
“By allowing their currency to finally appreciate against the dollar, the Chinese empower their citizens with greater purchasing power. It also provides them with the ability to take up the production slack lost from the U.S. consumer who will no longer be able to afford cheap exports. In addition, the Chinese have been directly encouraging precious metals ownership. With enough population ownership, it would be much easier to position and pull off the transition to a gold backed Yuan.” – Jeffrey Lewis (link)

Lust for gold: Russia admitting what China won’t (at least officially)
Although all reports indicate China’s gold reserves are through the roof, their “official” holdings as reported to the IMF haven’t budged since 2008. Russia, however, isn’t shying away from their insatiable demand. 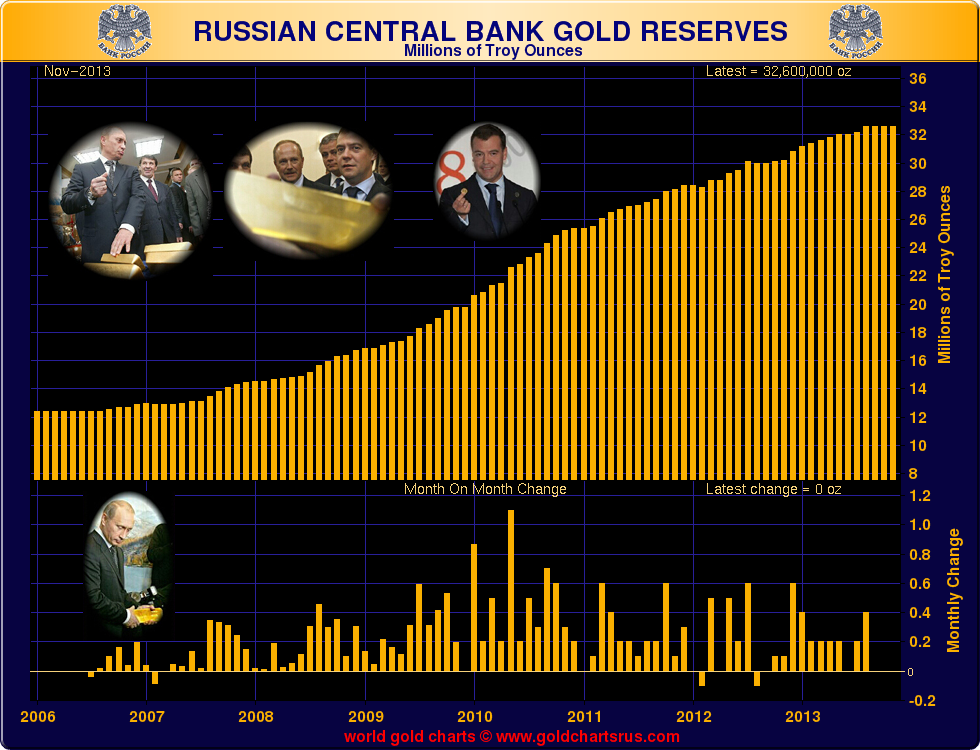