Home » Blog » Market Update: Gold is in a “secret bull market” that has yet to hit the U.S.

Market Update: Gold is in a “secret bull market” that has yet to hit the U.S.

Gold has lowered in recent weeks and found a level of support just south of $1,600.

But that’s when measured against the U.S. Dollar. Against other currencies, for example in Japan, Brazil, Iceland, India, Argentina and England, gold is experiencing a “secret bull market” as it hits all-time highs.

It’s all due to the currency wars raging around the world, with nations trying to one-up all the others by devaluing their currencies. In fact, other countries have been easing to such a strong degree that despite the Fed’s best efforts with QE Infinity, the inflation created elsewhere has amazingly outpaced what’s happening at home. That means that in strictly relative terms, the U.S. Dollar has actually strengthened… at least for now.

But the Dollar’s “strength” isn’t sustainable; it’s a fiat currency, after all, and gold’s day to shine against it is approaching. With recent reports showing the highest levels of inflation in the U.S. in three years, is that day right around the corner?

If you haven’t yet protected your savings from the Dollar, now is the time.

Why gold’s run isn’t finished yet
“We do not have much inflation at the moment, except in financial assets. But it would be a brave person who could say confidently that we won’t get any down the road. Gold, famously, is a hedge against inflation. This is why some very sensible people suggest you should always have a few percent of your portfolio in gold, as insurance.” – Brett Arends, MarketWatch (link)

Currency war is good for gold
“We are now moving irrevocably to a time when gold will measure currencies, not currencies measure gold.” – Julian Phillips, founder at GoldForecaster.com (link)

I’m staying out of stocks – concerned about insider selling
“What truly concerns us is that as insider selling has risen, corporate buying of those same securities has also risen. [Why should we be] bullish of shares when corporate insiders are selling their shares even as they mandate that their corporations buy shares on the open market?” – Dennis Gartman (link)

Fed easing could lead to “surge in inflation”
“Without monetization, the government could end up defaulting on its debt, which would lead to a financial crisis, producing an even more severe economic contraction. The central bank would be forced to purchase ever increasing quantities of government debt by printing money, eventually leading to a surge in inflation.” – Frederic Mishkin, former Fed Governor, David Greenlaw of Morgan Stanley, James Hamilton of UCSD and Peter Hooper of Deutsche Bank (link)

Silver to eclipse $100 on skyrocketing Chinese demand
“There is simply not enough silver in the world to accommodate photovoltaics. When you add to that the industrial and investment demand for silver, you know silver is setting up to break $100. Silver under $30 is a joke. It really is a joke.” – Dr. Stephen Leeb (link) 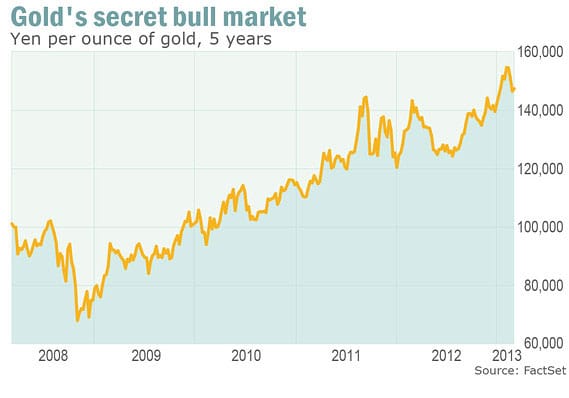