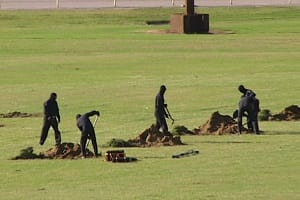 Business news is awash with optimism about the “encouraging” jobs numbers that were released last Friday, indicating yet again that the recovery is real and the economy is strengthening. But is it? Is it really? The possibility makes the stock market a little nervous because many take seriously the Federal Reserve’s threat to taper Quantitative Easing on better jobs numbers. If we truly do have better jobs numbers, there would go the gravy train.

It is interesting when supposedly good news spooks the markets because they see it as a reason to take away their lifeline. (Clearly, they know it is the only reason they are staying afloat right now.) But that is what’s happening in the topsy-turvy land known as Wall Street. Markets ended the week flat after a slight uptick on Friday to recover from a week-long slide, suggesting perhaps some believe in true Christmas miracles: That fundamentals might actually be strengthening. If that is the case, perhaps we really don’t need the stimulus to stay afloat anymore. We hate to be a Grinch about this, but…

True economic strength is not a strong possibility. Official government economic statistics are so distorted today, they are almost meaningless. Mark Twain famously said: “There are three kinds of lies: lies, damned lies and statistics.” However, the markets live by these numbers. And, when the statistics are a lie, the markets will die by them too, and no one will be more shocked than Wall Street when it happens.

A good bit of the hiring that went on in November was in retail and temporary jobs, indicating that after the holidays are over, January jobs numbers may be especially jarring. Also consider that retail sales figures collected from the Black Friday shopping weekend were dismal, missing expectations significantly. And that’s even despite the heightened levels of promotions this year, with many stores opening on Thanksgiving Day instead of the traditional wee-hour blitz on Friday morning. Prices were slashed to nearly fire-sale range, but it made little difference, leading many retailers to issue negative forecasts for the rest of the holiday season.

If businesses are increasing their expenses (by hiring more people) while revenue is anemic, then no, that is not a sign the economy is strengthening. In fact, without any productivity to justify this small hiring blitz, it could prove to be very expensive and damaging to the economy. It doesn’t take an economist to know that the goal of the economy is not jobs; the goal is profitability. Otherwise, why not hire people to dig holes and then fill them all day?

The sad truth is that for all intents and purposes, that’s what our economy did last month: We hired more people to dig holes and fill them in, without any true economic output – not in the form of creating or supporting profit – to show for it. The new hires were simply one big, net drain on the economy.

Nonetheless, the dollar strengthened against other currencies on Friday’s jobs news, which of course keeps gold in the buying-opportunity range. If you haven’t bought some recently, you might want to do it soon before January numbers reverse everything.

Why investors holding gold for the “right reasons” aren’t concerned
“Some gold investors are worried about the value of their gold after the correction from $1,920 in 2011. But the investors who hold physical gold for the right reason – TO PRESERVE THEIR WEALTH – are not concerned. They know that the only ‘solution’ that governments have is to print ever increasing amounts of worthless paper money. And the wise investor also knows that physical gold will continue to be the only money that preserves purchasing power over time. This means that measured in dollars or any other paper currency gold will gain substantially and possibly exponentially.” – Egon von Greyerz (link)

Here’s where the “super-rich” will move their money next
“Picture a chart tracking the tangible asset classes of the super-rich: art, jewelry, high-end London and Manhattan apartments, beachfront property, gold bullion, etc., things that exist in limited supply and will be prized no matter what the S&P 500 or 10-year Treasuries are doing. Virtually all the lines on that chart would would be looking parabolic right about now – except precious metals. A billionaire, trying to figure out where to move his next hundred mil would look at this chart and see one outlier, one thing that hasn’t yet gone through the roof, and make the obvious choice. That day is coming.” – John Rubino (link)

This is “an opportunity of a lifetime” for investors
“Given the recent further weakness in the price of gold bullion, should investors be running for the exit doors? Some well-known ‘gold bugs’ have recently turned bearish on the precious metal. But I’m on the opposite side of the spectrum; I see the pullback in gold prices as an opportunity of a lifetime for contrarian investors.” – Michael Lombardi (link)

If you believe this… buy silver
“If you believe in a global economic recovery – buy silver. If you believe there isn’t an economic recovery and we will continue on ‘central bank’ life support – buy silver. A major new buyer has entered the market purchasing as much as 20% of the total world production this year for investment purposes – follow the money and add some silver. And to top it off, at the moment it costs more to produce silver than to purchase it. Is it any wonder that investors continue to add to their positions and have driven coin demand to a new all-time high?” – David Franklin (link)

Growth of S&P 500 versus growth of United States GDP: Something has got to give…