Home » Blog » The past week in Market Madness: THIS is what passes for capitalism these days?

The past week in Market Madness: THIS is what passes for capitalism these days? 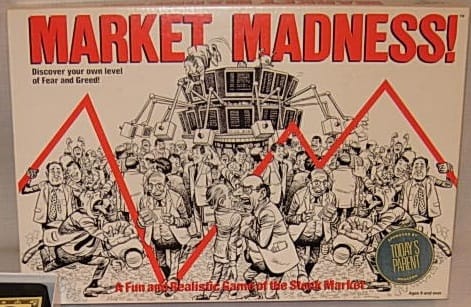 Friday’s disappointing jobs report – which yet again fell short of expectations and had unemployment remaining stagnant at 6.7% – adds more fuel to the market’s angst as it continues to lose patience with the so-called recovery. The Dow tumbled three digits on the underwhelming news, which suggests that it has now moved past the phase of merely being disappointed to being outright spooked.

Even Janet Yellen is showing her frustration. In her first public speech as Federal Reserve Chair, she signaled that the Fed will continue to be accommodative for the foreseeable future. Not only is she not backing off the taper, she’ll keep interest rates near zero until unemployment moves down further. So the cheap money and continued illusion of wealth will keep coming until unemployment reaches 5.6% or lower, the level that the Fed currently views as a “healthy”. We’re sure it will work eventually… (What was Einstein’s definition of insanity again?)

Meanwhile, evidence that the entire market is a bubble about to burst has never been more convincing. In the aptly named blog “Juggling Dynamite”, Danielle Park shares a terrifying graph that illustrates the alarming rate of margin debt leveraged in the stock market these days, and compares it to the build-ups of 2000 and 2007. The point can’t be clearer: The market really is one giant pyramid of debt perched on a house of cards that is bailouts and cheap money. And once it begins to tumble, the fallout for anyone exposed to stocks could be brutal – like nothing we’ve seen before.

Not only are there ever-increasing signs that the market a dangerous place to be, but another interesting article that caught our eye points out one ways (among others) that it is duplicitous as well. In his new book on the world of high-frequency trading, Michael Lewis illustrates how high-frequency traders are able, in a split second, to use sophisticated computer algorithms to get your buy order, buy the stocks for themselves and then sell them back to you at an inflated price. It only works out to a few pennies each trade, so most people don’t notice and would hardly think it worthwhile to complain, but in total this practice skims millions of dollars out of the market. So for the big hedge funds and big traders out there, it has a massive impact on business. Lewis discusses how the name of this game is the fastest possible connectivity to the exchanges than the other traders, who are all competing for the same few pennies per stock order. In the last 6 or 7 years, fiber optic and satellite connectivity in Manhattan around the exchanges has gone a little crazy. He cites one rooftop area, a mere four feet by four feet, which rents for $20,000 a month because it has the best satellite vantage point for high frequency trading. There are hundreds of millions of dollars at stake with this practice.

It is amazing what passes for capitalism these days. With so much uncertainty swirling, with so many unknowns, make sure your nest egg is sheltered from the madness with one asset that has been a trusted store of wealth for thousands of years: gold. When you’re ready to get started, give us a call at (800) 355-2116 or simply request a Birch Gold™ Investment Kit here.

Gold remains the “best” long-term hedge against dollar loss
“Everything to this observer suggests a supply squeeze continuing to develop, which will have to impact prices positively sooner or later, regardless of interest rate levels, Fed tapering etc. And, as we have pointed out here before Fed tapering should be a bit of a red herring given that the European Central Bank, representing almost as large a market as the U.S. is currently doing the reverse and, if anything increasing easing and further lowering interest rates. The gold market is currently too U.S. driven with blinkered investors there mainly ignoring what is happening in the rest of the world. The squeeze on physical gold which is in process will ultimately gain the recognition in the U.S. it requires and gold prices will surely recover. But then gold can defy all logical reasoning, but overall still probably remains the best long term hedge against monetary value depreciation.” – Lawrence Williams (link)

Physical gold demand to drive gold’s price
“Investment demand, which had fueled the rally for over a decade, is no longer driving gold prices. Instead, we believe gold is being driven by physical demand for jewelry, coins, and bars from China, in particular. Indeed, we would argue that physical demand trends in the emerging world will largely define gold’s price movements this year.” – James Steel (link)

Here’s what makes gold different from everything else
“With gold, there is no such thing as a glut. The market is ready to absorb whatever new metal comes out of the ground. In fact, it has been absorbing it for thousands of years. Unlike with wheat or platinum, the price of gold has almost nothing to do with the quantity produced. This is because gold is not purchased for consumption. If you’re an eater of bread or a user of platinum, the price you pay matters. By contrast, gold is purchased as a store of wealth that has no risk of default. There aren’t higher or lower uses of gold. The use is always the same – as money. Gold serves this purpose equally well at $1,300 or $130,000 per ounce. Everyone has seen a graph of the supply and demand curve. Price moves up when supply goes down, and vice versa. It’s true for every substance known to man, except one. Gold is the one thing in the universe that doesn’t follow the rule.” – Keith Weiner (link)

Gold is “scary” (to those who don’t get it)
“Gold is a scary asset to own now. It has been trending lower for the past couple of years. It is also esoteric. Therefore, people simply want nothing to do with it. Eventually, this sentiment will change in the United States. As previously mentioned, citizens in many other countries have no trouble storing their wealth in gold. They understand that it will preserve their purchasing power over long periods of time, and that speculators in the futures pits have been giving them a long term buying opportunity.” – Ben Kramer-Miller (link)

Here’s the REAL price of gold since 1791
Here’s what the last 220 years of military spending, economic growth, presidents, and inflation have done for gold… 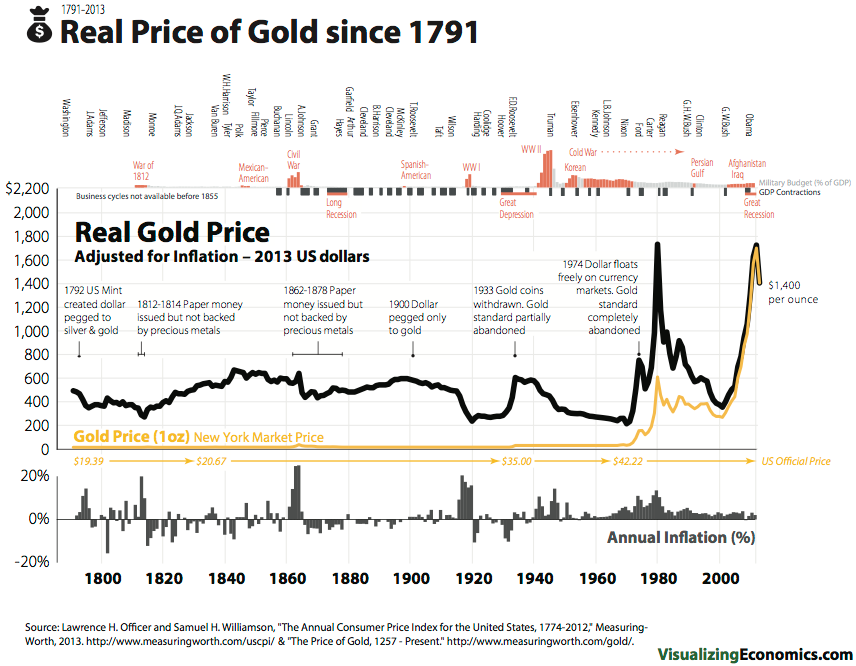