It’s a simple and noble goal, one that we hear from our clients every day: You want to protect your savings, to ensure that you’ll be able to maintain your lifestyle (not just now, but throughout retirement) and maybe even pass some wealth on to your loved ones. Everyone should have that right.

But the way the markets have gone in recent years, especially in the last few weeks, we’re hearing from more and more people that they feel as though they’re losing control over their financial destiny. The latest example? The Federal Reserve merely suggested the other week that it may taper its stimulus program of Quantitative Easing, and it sent the stock market into a free fall. Unfortunately, this isn’t the first time Ben Bernanke has influenced the market. Month after month, year after year, Bernanke can so much as just look at someone the wrong way and the markets have swung wildly.

Do you really want your savings to be at the mercy of Ben Bernanke?

Fortunately, there is a way to free your savings from this mess… and it’s to beat the Fed at its own game: Become your own Central Bank.

Whatever your savings are in, back them with physical gold and silver. Central Banks across the world already do it, and they continue to take possession of more, and more, and more (the Federal Reserve included). Consider that Central Banks have bought more gold than they’ve sold for nine consecutive quarters now. And in just the last week, several Eastern European banks purchased 580 tons of gold – that’s a massive 25% of the world’s annual gold mine production!

In a piece titled “Why I Own Gold”, Axel Merk of Merk Investments recently put it best:

“We don’t think investors should rely on their government to preserve their purchasing power. Indeed, a government in debt does not have its interests aligned with those of investors. As such, an investor interested in a gold-backed currency should create their personal gold standard should they desire one.”

You don’t have to believe that gold and silver are the sole answer; other investment options can be perfectly suitable as part of your portfolio. But we do firmly believe that for any savings portfolio to be sensible, you should do as the Central Banks do and back your assets with gold and silver.

Gold and silver may be down the last few weeks… but no matter how low they may go in the short term, physical precious metals will always hold value. You can’t say that about stocks. You can’t say that about the dollar. So do the sensible thing and back your assets with physical gold and silver. If your stocks ever go to zero, if the dollar ever goes to zero, you’ll be glad you did.

Why the Fed needs gold to triple in value
“At current prices, gold backs less than 10% of Fed-issued money, a record low. There have only been eight times since 1720 that the gold backing of the dominant central bank has approached this level: the 1742 charter renewal controversy, the Dutch banking crisis of 1763, the suspension of convertibility during the Napoleonic Wars, the Panic of 1826, the beginning of the dollar crisis in 1969, the beginning of the current gold bull market in 2001, the financial crisis of 2008, and this week. Shortly after every instance of gold being valued so little and paper promises so dear, the two asset classes have experienced a sharp reversal. And, in the modern era, the only way to increase the gold backing at the Fed is for the market to increase the price. Gold must triple, at least, to return to the post-1971 average backing.” – Daniel Oliver, founder of Myrmikan Capital, LLC, and director of the Committee for Monetary Research and Education (link)

Jim Cramer: Why you must own gold
“Gold bullion, gold coins, I want to use the decline to get in for people who don’t own any gold. Why? I like it as insurance. I want to insure four-fifths of my portfolio with one-fifth of my portfolio… I’m talking about insurance, I’m not talking about trades. The gold stocks are trades, and I hate them… I would like to diversify right now and buy gold coins.” – Jim Cramer (link)

Silver winning India’s “war on gold”
“Silver has not been exposed to the same import restrictions that gold has and recent silver import figures confirm that investors have flocked to silver, likely as a substitute for their desire for gold. And why shouldn’t they? With limited bank branches in the country, owning precious metals is synonymous with savings and security. While it seems that the larger investors have moved their gold purchases offshore, we suspect that the majority of Indian investors have turned to silver as a substitute for gold. The recent import numbers are staggering.” – Eric Sprott and David Franklin (link)

Gold in 2013 a repeat of 2008?
“Our feeling has always been that a healthy trend gets healthy corrections. This is yet another healthy correction like we saw in 2008. The interesting thing is because of where we’ve come from, if we were to now follow, over the next three years, the move after we put in that 2008 low in gold in terms of magnitude, it actually suggests something in the region of $3,400 to $3,500 for gold.” – Tom Fitzpatrick, Citi analyst 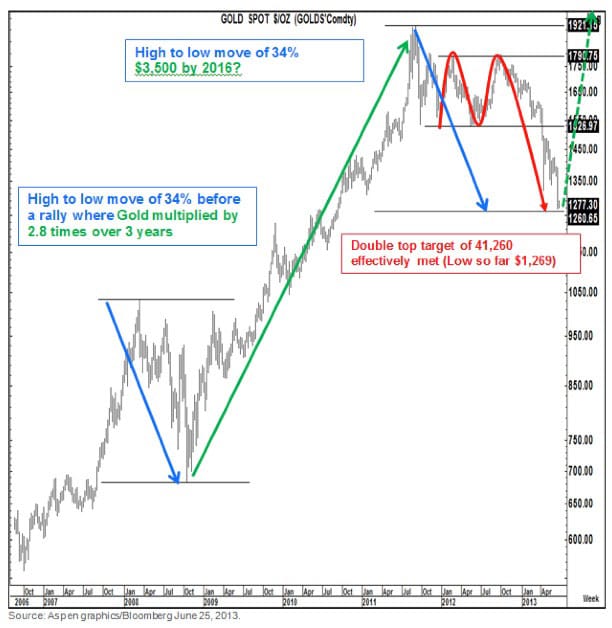 And finally, we’d like to take a moment to wish all of our readers a very happy Fourth of July! We hope you enjoy some time with family and friends.