The latest jobs report released last week revealed a net improvement of 88,000 non-farm jobs nationwide and a decline of 0.1% in the jobless rate to 7.6%. To call this a disappointment is understatement. Are these really good indications for the strength of the economy? It’s becoming increasingly clear that all we’ve done over the last five years is pave over the potholes with money; but we haven’t fixed the road. Nevertheless, pundits are spinning the number to show the positive impact Quantitative Easing has created for working class America. The numbers, however, show something else; the “new normal” of 2% annual growth.

With jobs (at least ones that can be counted) ever elusive, the true strength of fiat currencies is undergoing real-time stress testing. Economies around the world are seeking to stabilize their currencies, even while confronted with a collapsing Euro and an over-valued, underperforming dollar. This past week, Japan announced that they would strengthen their own program of quantitative easing, but what they call “strengthening” of monetary stimulus we call “weakening” of a currency. Like the U.S. jobs report, it’s why we must take all information with a healthy dose of skepticism.

The reality: Fewer and fewer people are bothering to look for a job. In fact, the participation rate in the job market has now reached its lowest level since 1979.

With more Americans abandoning attempts to participate in the formal economy, an increasing number have taken to alternative means of employment, putting themselves back to work as consultants, day laborers and maids, to name a few. Some have organized time banks where they simply swap hours to get the services they need. And in doing so, they’re discovering that true value is not to be had in paper but in confidence.

Are you confident that your current investments will maintain their momentum? Have you created alternative routes to protect your assets? Taking possession of physical gold and silver can do just that — and now is the time to get in. If you don’t have your money in your hand, you don’t have it. Call us today.

Rickards: “Buy your gold and put it away”
“If you are going to buy gold I would say just buy your gold and put it away as I think it’s going to do extremely well. There is very little doubt that with inflation coming and the money printing that is going on around the world, that gold is going higher. I just tell people buy their gold, put it in a safe place and don’t read the papers or worry about daily volatility.” — Jim Rickards, author of “Currency Wars” (link)

Fiat currencies make the case for holding physical gold
“By its obvious and concerted attack on gold and silver, the U.S. government could not give any better warning that trouble is approaching. The values of the dollar and of financial assets denominated in dollars are in doubt.” — Dr. Paul Craig Roberts, former Assistant Secretary of the U.S. Treasury for Economic Policy, Reagan Administration (link)

After a week of moving like a carpet being shaken out, the price of gold is an invitation to buy
“We just don’t know if this is just a bounce, or if this is where physical buying comes back in.” — Ralph Preston, market analyst, Heritage West Financial (link)

Chart of the Week

If “labor force participation rate” hadn’t dropped by nearly 2.5 percentage points
“Instead of peaking around 9 percent, the unemployment rate for 25- to 54-year-olds would have reached 10 percent at the end of 2009. This broader measure of unemployment has since dropped to 8.5 percent. That’s an improvement, to be sure, but a significantly smaller one than appears in the headlines.” — Matthew C. Klein (link) 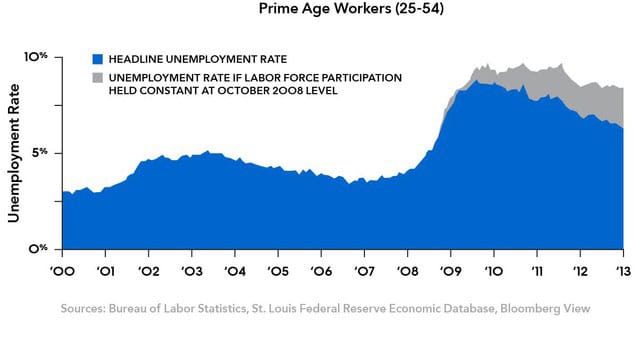