Market Update: Mounting evidence 2013 will be 2008 all over again

Peter Schiff was right in 2007. While many of the other “experts” were feverishly telling you to buy stocks, Schiff was one of the few predicting disaster for 2008. This track record alone should have been reason enough to believe him last year when he first predicted a second financial crisis for 2013. But if you carried some skepticism with the new forecast, there’s simply no denying the latest evidence of the stars aligning.

The last time the stock market bubbled to the levels we’re seeing today was 2007. The S&P 500 was over 1,500 – an all-time high. In seemingly the blink of an eye, it lost over half its value, wiping out the savings of millions of Americans. Today, a long four years later, the S&P has ticked above 1,500 for the first time since 2007, again testing that same, precarious all-time high.

Why have stocks recovered to 2007 levels? It’s not the fundamentals. It’s absurdly high levels market liquidity. But most investors don’t see it. Most investors, filled with a renewed (but false) sense of confidence (partly at the urging of those same “experts” who are again feverishly telling you to buy stocks) are pouring money back into the markets. But the big guys? They see it, and they’re getting out, with insiders selling twelve times more frequently than they’re buying. Says David Coleman of the Vickers Weekly Insider report, “Insiders are waving the cautionary flag in an increasingly aggressive manner.”

Too many good people didn’t act on Schiff’s calls for 2008, and suffered pain as a result. He’s making the same calls today, and the facts back him up. Why would you risk that again? If you’re not protected with gold and silver, don’t wait any longer. Call us today.

Spot price at week’s end, and change over previous Friday:

Stocks may hit major rough patch when Fed ditches QE
“All of the stuff that was done with the quantitative easing programs has injected so much – we’re talking $2 trillion – into all kinds of assets, including stocks. So what you’re seeing here at Dow 14,000 is not a reflection of the U.S. economy, it’s just a reflection of the money flows that tend to push the market higher.” – David Sterman, senior market analyst, StreetAuthority.com (link)

Central banks making massive purchases on gold’s dip
“We remain in a 1930s slump. Until this is overcome it is a fair bet that the central banks will stay uber-loose to mitigate the damage. The world’s policy-making elites know this, which is why central banks bought more gold last year than at any time since 1964. Turkey bought 164 tonnes, Russia bought 75 tonnes. Brazil, Korea, the Philippines, Kazakhstan, Iraq, Mexico, Paraguay, and others all added to their gold reserves. The Chinese don’t declare gold purchases, but it is an open secret they are buying on every dip, as they have to do merely to keep the proportion stable at 2pc of their $3.3 trillion reserves.” – Ambrose Evans-Pritchard, the Telegraph (link)

Advice to the investor holding a full line of stocks
“His best bet would be to pick a downside percentage, beyond which he will not hold his stocks. The usual procedure is to decide, “I’ll sell any of my stocks that decline 8% or more from their peak price.” In other words, the careful investor always has an exit strategy in mind. The unforgivable mistake occurs when an investor rides his stocks down during a vicious correction or a bear market – all this because the stubborn investor has no pre-planned exit strategy.” – Richard Russell (link)

If history is any indication…
“We are looking at one helluva drop from here – and there are various indications that this is going to happen, including the extreme bullishness of newsletter writers, the Smart/Dumb confidence ratio, the VIX and VIX COT etc… and of course the fact that the market has arrived at a zone of massive resistance approaching its 2000 and 2007 highs, which is as good a point as any for it to turn down.” – Clive Maund (link) 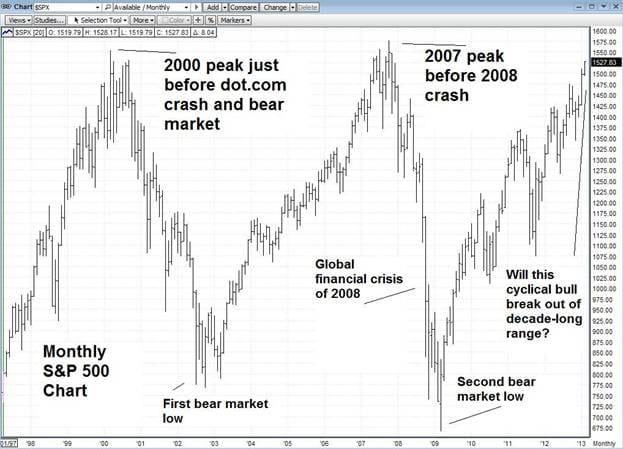 Silver “grossly oversold”, more so than any time in last five years
The “massive shorting in the futures market is warping supply and demand and at some point, the shorting will fail and silver will have a spectacular rise.” – Paul Mladjenovic, author of Precious Metals Investing for Dummies (link)