Home » Blog » How this “new normal” of government dysfunction affects us

How this “new normal” of government dysfunction affects us

We’re heading into Week 2 of the government shutdown, with all sides not only being at an apparent stalemate but with hardly any sense of urgency. It has left many to openly question: What’s the end game in all of this?

Now we barrel towards the deadline on October 17 to raise the debt ceiling… when things will almost certainly really get hairy. To put it mildly, closed national parks will be the least of our concerns.

Even if our representatives can come to some kind of an agreement by the deadline – any kind of an agreement by the deadline – it’s a safe bet that they’ll take us right to the brink of defaulting on our commitments. And as this dangerous game plays out, we may see a repeat of 2011, when gold soared and stocks crumbled under the weight of fears of default.

Let’s take the optimistic view for a moment and say that we not only don’t default in 10 days but eventually all government services are restored. Then what? Give it just a little time, and it has become painfully clear in the last few years that our representatives won’t take long to find a new cause to play political football with our livelihoods and run us right up against another deadline.

Here’s the big problem with all of this: Unlike many “new normals”, this one of rinse-and-repeat government dysfunction isn’t sustainable – not with the increasing levels of stress that it places on the markets and the dollar. And the longer the fiscal issues continue to be kicked down the road with band-aid solutions, the less likely the Fed will be to reduce quantitative easing, thus adding even more pressure on the dollar.

The dollar can continue to bend – more, and more, and more – but with each passing day, as the pace and severity of that bend continues, the dollars in your savings are increasingly worth less. If you haven’t already done so, it’s time to protect your savings with gold. You don’t need to protect all of it – but even if just a portion are in precious metals, that’s a significant start.

Head of Italy’s central bank sings gold’s praises
“Gold is unique among assets, in that it is not issued by any government or central bank, which means that its value is not influenced by political decisions or the solvency of one institution or another.” – Salvatore Rossi (link)

Dollar seen as shutdown loser as growth hit spurs QE
“If the fiscal issue drags on, the Fed is likely to be less willing to reduce stimulus in the economy. The dollar will suffer if that is the case.” – James Kwok (link)

Gold and the debt ceiling: 2011 redux?
“If there is no resolution within the next 17 days we see the potential for an impact on the global system equal to the mid-2007 credit crunch. This will be more than a ‘game of chicken’ as it has been building up for years now. Uncertainty has taken over inside and outside the U.S. If not resolved, we will see instability take over from uncertainty. This is gold positive.” – Julian Phillips (link)

As gold price corrects, China sees an opportunity… and jumps
Drop in price “seen as an unprecedented opportunity by many [in China] to restock gold assets” – Cameron Alexander (link) 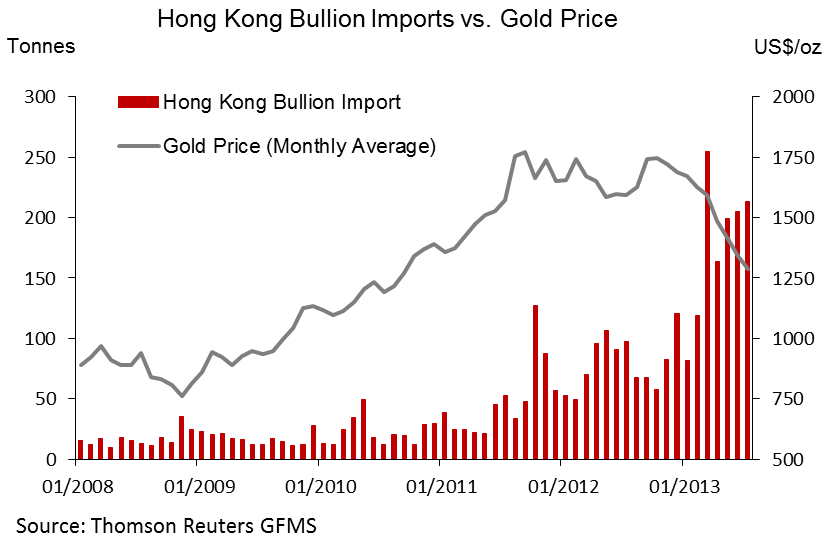