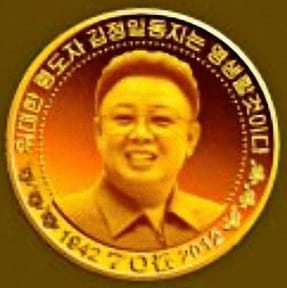 North Korea is at it again. Last week, the secretive nation moved front and center in the news on reports that the second most powerful man in the country was executed by the most powerful one. With typical vitriol and hyperbole, a state-run newspaper ran a scathing 2,700 word indictment of Jang Song-Thaek, the uncle of current dictator Kim Jong-Un. Jang had been in the inner circle of power for decades, when suddenly the temperamental Kim Jong-Un declared him a traitor, “worse than a dog”, and after a lightning-quick trial, had him executed.

Believe it or not: That’s not even the most interesting news out of North Korea! So a mercurial and violent dictator executes his uncle… big deal.

What’s an even bigger deal are the reports of “large amounts” of North Korean gold being sold off to China, lending more credence to the idea that there are very serious tensions within North Korea. The reports come from South Korea, so they should be taken with a grain of salt, but if true, there is potentially enough gold involved to affect the gold market.

How much gold is at stake here? The notoriously secret North Korea does not report its holdings to the IMF, so it is difficult to know its reserves. However, there has been robust gold mining in North Korea going back centuries, with its largest mine reportedly able to pull about 8 tons of gold out of the ground every year, so it is believed that the nation could hold as much as a staggering 2,000 tons of gold. Remember that China’s “official” reserves stand at just half of that. (Although many believe China has acquired more than twice that since they last reported to the IMF.)

It should be noted that Kim Jong-Un’s revered grandfather, Kim Il-Sung, was adamantly opposed to the idea of North Korea ever selling any of its gold reserves, so that gives these reported sales an even more potentially ominous meaning. Coupled with the execution of Jang, speculation is rampant: Is North Korea is a nation on the brink??

North Korea’s apparent desperation is good news for China and its seemingly insatiable appetite for gold. Chinese firm Shandong Qixing recently announced it is poised to buy Australian Stonewall Assets, which has important gold mining interests in Australia and South Africa. China is fascinated with gold – and not just because the nation likes pretty, shiny statues of Chairman Mao valued at $16 million. China knows that as current supply stands, there is only about 25 grams of gold per person on the planet. That is not nearly enough to “go around”. Fiat currencies around the world are likely to begin falling like dominos. Holding gold is holding onto economic stability in the face of chaos.

If it truly is making its gold available, North Korea is giving China (and the rest of the world) a huge Christmas present. China thinks it is a great time to buy gold, and so do we. Call us while the buying opportunities are still good.

Forbes: Gold is a greater store of value
“I believe that gold will have more of a store value of money in 20 years than putting a hundred dollars a month into a savings account that is not gonna be able to access anything but low interest rate regimes for a long time.” – Steve Forbes (link)

In the face of an uncertain future, gold remains the best insurance policy
“The gold price at $1,222 an ounce is certainly well above lows in 2001. However, it is now priced in about the mid-range, when compared to oil and the stock market, and relative to government bonds and cash it is now more attractive as yields have fallen. Gold is simply the best insurance against inflation, or deflation. ‘I would rather own gold than government bonds, high-yield bonds and equities. If this scenario [deflation] were to pass it would lead to even more money printing around the world,’ according to Marc Faber.” – John Ficenec (link)

Why 2013 has been a blip on the radar
“There is no question that [a driver for gold in 2014] will be a further drop in the U.S. dollar. The U.S. dollar has been hanging by its fingertips. So we will see at least a 10% drop in the value of the U.S. dollar, and this will be more than enough to break gold out of this trading range and into much higher price levels. I see 2014 as a continuation of the secular bull market in gold. In the fullness of time, 2013 will simply be seen as an interruption of a very long bull market cycle for gold.” – John Ing (link)

Gold proving resilient; is this a “major shift” in the market?
“Gold’s failure to go lower last week as economic data and taper talk moved against it… and in fact it’s ability to actually rise in the face of these headwinds… have apparently convinced many speculators that a QE taper really is imminent. And thus, it’s time for them to cover their short bets on gold. In short (no pun intended), it seems that the gold price has finally discounted a taper, and we’ve run out of sellers. If so, we are witnessing a major shift in the gold market.” – Brien Lundin (link)

Where will gold head in 2014?
“With imports into China at record levels, and Indian purchases of physical gold coming back – even if through unofficial channels – the physical market is once again getting very tight… The central planners are losing control, and market forces are gaining the upper hand. So unless those June lows in gold and silver are taken out, we have to assume that those lows mark the end of the correction. As time passes, more people are going to jump on this uptrend that began from those June lows. And given the path to currency debasement which erodes the purchasing power of national currencies that the central planners are pursuing with QE, bank bail-ins and all their other crazy schemes, we know that gold and silver will continue to be driven higher. The only question is how much higher? I think it is time to dust off those $2,000+ forecasts, and look for these kinds of prices in 2014.” – James Turk (link) 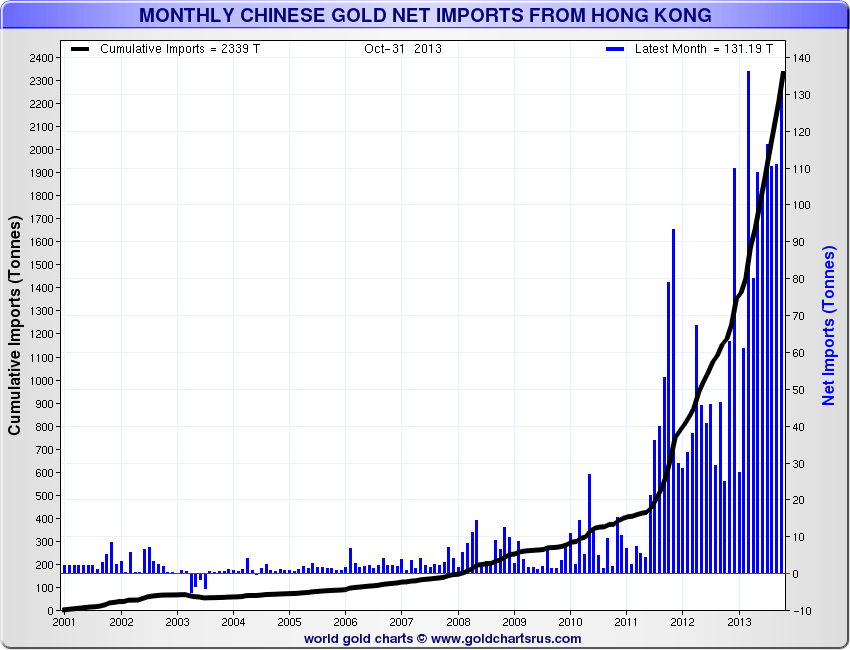