Home » Blog » Here’s the One Prediction We Will Stand By

Here’s the One Prediction We Will Stand By

Predicting business trends is dangerous, particularly on the Internet and particularly when you put a time frame on it. So although it doesn’t come as a surprise to us, even we wouldn’t have put such a bearish call on the recent jobs numbers that came out for December last week. Sure, we knew the numbers were likely to disappoint, but we at least thought the bad news would wait until January’s numbers were tallied. Economists were predicting a nearly 200,000 job gain for December – they were wildly off. The economy added an anemic 74,000 jobs during the “busy” holiday season. Pathetic.

It gets worse: Workforce participation is plummeting as job seekers just give up, and perhaps that is the real number to pay attention to. After all, extended benefits have ended abruptly for many and Congress so far has done nothing serious about renewing the program. That defines many unemployed out of official existence, and many others are giving up the job hunt in despair. All of the people in these categories are still without a job, but they don’t count in the official Bureau of Labor Statistics unemployment figures. However they cannot escape notice in the labor force participation rate.

This is why no one is really cheering a further drop in the unemployment rate below 7% to 6.7%, the lowest figure in five years. The sad fact is that even though 74,000 new jobs were added to the economy last month, 347,000 people dropped out of the labor force. This pushes labor force participation down to 62.8% – the lowest since 1978. Got that? 1978!!! Sobering.

How will Janet Yellen’s Federal Reserve react to this change of course? Will the taper happen at all since it has seemingly “failed” before it has begun (if we go by their benchmarks)? It will be interesting to watch and listen.

Meanwhile, some who do prognosticate are making extremely bearish calls for Wall Street in 2014. United-ICAP chief market technician Walter Zimmerman is calling for a heart-stopping 70% drop in the Dow Jones to 5000 and the S&P bottoming out at a puny 450. To be fair, he made similarly bearish and headline-grabbing predictions in 2012 that would have made even gold bugs reach for the Tums. We don’t think he was wrong – we just think he hasn’t been proved right yet. His underlying analysis is valid, but this is why it is unwise to put a time frame on things. You just can’t know exactly when the market will turn. We all hate uncertainty, but it is unfortunately inherent in the marketplace.

In any case, Chuck Jaffe over at MarketWatch issues this wise warning not to let Irrational Exuberance 2.0 lead you away from the time-tested wisdom of diversifying. No matter how well one asset class has done for you in the past, putting all your eggs in one basket – or even in a “diversity” of baskets that are all in paper assets – is never a great idea. Gold and precious metals are a great asset class to diversify into if you haven’t already. Our prediction is that you will sleep better if you do.

And we stand by that one.

Why faith in Gold? (One simple statistic)
“Why do we continue to keep the faith with gold (and silver)? We can encapsulate the argument in one statistic. Last year, the US Federal Reserve enjoyed its 100th anniversary, having been founded in a blaze of secrecy in 1913. By 2007, the Fed’s balance sheet had grown to $800 billion. Under its current QE program (which may or may not get tapered according to the Fed’s current intentions), the Fed is printing $1 trillion a year. To put it another way, the Fed is printing roughly 100 years’ worth of money every 12 months. (Now that’s inflation.) Conjuring up a similar amount of gold from thin air is not so easy.” – Tim Price (link)

“Gold will become one of the only refuges around”
“We’ve had three central banks in America. The first two disappeared. This one’s going to disappear too in the next decade. It’s not a possibility, it’s a probability. People will realize that these guys have led us down a terrible path. The Fed balance sheet has increased by 500 per cent in the last 5 years and a lot of it’s garbage… It’ll turn into a bubble or a very inflated situation, but eventually the markets will say, we’re not going to take your garbage anymore, whether it’s treasury bonds or currency… Gold will become one of the only refuges around.” – Jim Rogers (link)

The one simple truth about gold (what does it mean for 2014?)
“Gold is a nearly perfect form of money. It is one of the few things on planet earth that contains all of the following attributes; beauty, scarcity, virtual indestructibility, and is also transferable and divisible. However, even after five thousand years of utility as a store of wealth, gold is still completely misunderstood by most on Wall Street… This is why most money managers wrongfully predict another disastrous year for the yellow metal. These advisors have never realized the simple truth that the value of gold never changes; only its expression in currencies, which can be diluted, changes. Therefore, it always preserves its purchasing power over time and is the best hedge against a fiat currency that is headed down the pathway of destruction. Gold prices increase when the market presages a currency will lose its purchasing power – it’s just that simple.” – Michael Pento (link)

Reasons to own gold “have not changed”
“We believe gold buyers will return. The fundamental reasons for holding gold have not changed…While some systematic risks in the global economy, such as the meltdown of the euro zone, have been partly allayed, the developed world is still carrying a burden of debt that remains largely unaddressed. We see current prices as an attractive entry point given our view that the balance of risks now points to the upside” – report from investment bank Coutts (link)

Robust demand for gold showing “no signs of abating”
“Since the dip in the price of gold we have seen increased demand for our gold bullion coins from the major coin markets, and this presently shows no sign of abating. The Royal Mint continues to supply to its customers and is increasing production to accommodate the higher demand.” – statement from U.K. Royal Mint (link)

Why demand for physical gold is surging: Buyers are in it for the long haul
“Coin buyers tend to be small investors who view gold as an insurance policy against financial shocks. Because these investors intend to hold onto their gold for years or decades, many see the recent drop as an opportunity to buy more at a cheaper price. They’re not under any pressure to get a yield or a return in a year… Unlike hedge funds, who may leave when prices fall, many coin buyers are in for the long haul.” – Bart Melek (link) 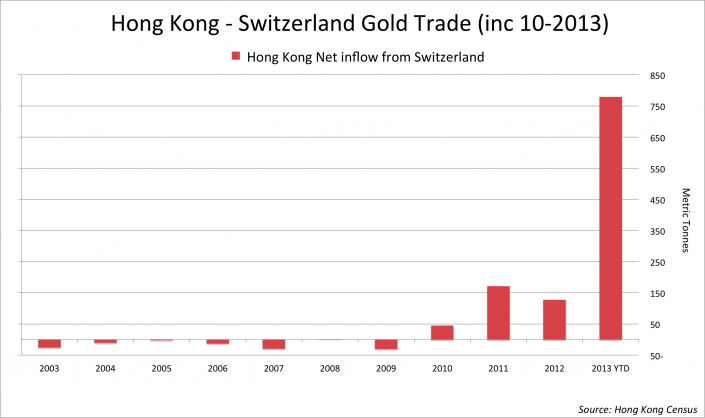