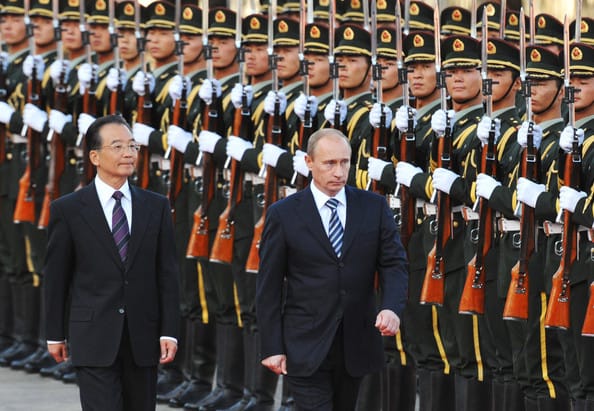 The past week has seen ongoing tensions in Ukraine, with super powers Russia and the United States trading barbs and warnings. How scary is it to think that Russia-U.S. relations, and our fate, rests with John Kerry and Vladimir Putin’s (hopeful) ability to keep his temper?

These sorts of tensions always roil the foreign exchange markets, as investors and traders take bets on what the future holds. Some warn of U.S. vulnerability to Russia because of how many of our treasuries they hold. There is a strong case to be made about why this should worry us. Take, for example, that there are about 16 trillion dollars and dollar-denominated assets floating around the world – about the size of our GDP. The Russians hold a significant amount of that. Not as much as the Chinese, sure, but enough that if they sold it all at once, they could trigger other selloffs. And that in turn could lead to skyrocketing interest rates and a hyperinflation mess that the U.S. is not equipped to deal with.

John Williams of Shadow Government Statistics points out that other countries have gotten through hyperinflation better than the U.S. would because of their thriving black markets. Our black market exists, yes, but it is not nearly as ubiquitous as those of other countries and it’s unlikely to carry us through any inflationary messes very comfortably. This is why gold is so especially important for Americans if they want to survive significant economic disruptive events. As a historically stable and liquid asset, and in the absence of an established system of underground barter, it is uniquely suited to allow us to trade for necessities.

Of course, this is a worst-case example, the doomsday scenario that some brace for but everyone hopes won’t actually happen. And fortunately, we can make a strong case that it won’t happen. A rapid pulling-out-of-the-rug from underneath the dollar would certainly disrupt the U.S. economic system, but it would also cause damage around the world, including to whoever pulled that rug. In other words, it’s a case of mutually assured destruction. Because of the dollar’s (albeit fading) reserve currency status, everyone owns a store of them. Again, $16 trillion is outside of our borders among various holders. To sink the dollar necessarily means a drastic realignment of financial holdings everywhere, and some hefty losses for everyone. It’s a nuclear option that wouldn’t be to anyone’s real benefit. You’d have to be pretty crazy, or out of touch with reality to invoke that option. And really, really angry. Is Putin capable of such a move?

For any country trying to rid themselves of the dollar, the smarter fiscal move would be to sell a bit at a time. It would make more sense to disentangle gradually and let the market adjust over time to minimize their own losses, yet still reduce (and perhaps eventually eliminate) exposure to the dollar. (And wouldn’t you know, that is just what China appears to be doing…)

Gold ticked down just a bit on Friday due to the recent jobs report, which the market somehow took as a positive, in spite of unemployment ticking back up to 6.7%. We’ll take it. If the market wants to find a silver lining in all of this and put gold on sale – even if just for a day – by all means. The “good” times, when gold has historically gone down, is when you will wish you had bought a little. Now is a “good” time. Call us! Or if you’re not yet ready to talk on the phone, just click here to get your free information guide.

Crisis in Crimea: Here are the implications for the dollar and gold
“We (the U.S.) don’t have a black market to escape from our dollars. Gold is probably the closest thing to that. Gold will tend to rally here as the dollar sells off, baring very heavy intervention by the central banks which you may see. The fundamentals will eventually dominate, and you will see a very weak dollar and very strong gold coming out of this.” – John Williams (link)

Gold bulls run for $1,400 as turmoil in Ukraine spurs demand
“Worries about a possible conflict are very constructive for gold, and we are seeing momentum traders come in. The mixed economic numbers out of the U.S. and concerns about slowdown in other parts of the world have boosted demand for a safe-haven asset.” – Quincy Krosby (link)

Even if Ukraine tensions ease… plenty of reason for gold
“There are plenty of factors out there which could help gold retain its safe haven status even should Ukrainian tensions ease dramatically. Perhaps most important in western markets is whether the U.S economy is still vulnerable. If, for example, the U.S. Fed taper is itself tapered because unemployment remains stubbornly high and the economy is not seen as recovering fast enough for tapering of the bond buying programme to be halted yet… This would send a strong signal that the recent stock market growth has to be vulnerable and may push more investors back into gold.” – Lawrence Williams (link)

When Chinese demand for gold conflicts with gold’s price (watch out)
“It’s just a matter of strong and weak hands now. Most goldbugs are strong hands – because they not only hold gold for investment purposes, they also hold it because of their view on economic theory – while a random US citizen on food stamps that owns a golden earring is a weaker hand. Anyway, based on certain parameters (import, demand, mining) one would think that in coming months the price of gold and Chinese demand will get in conflict; the situation simply can’t go on like this forever.” – Koos Jansen (link)

Here’s why gold is heading back to a bull cycle
“Last year’s shift in the gold market was rapid and the price response substantial. Instead of a multi-year downtrend, with disinvestment putting pressure on prices over time, many of the variables that drive gold prices have already reset to an extent. ETF and COMEX positioning no longer appear to pose the same threat to prices as in 2013. Gold producers have delayed the next phase of growth projects as they work to protect balance sheets. Long-term demand support from Asian nominal income growth, an evolving post-QE macroeconomic environment and lower disinvestment potential move our gold equilibrium model to now expect price increases over the next three years.” – Tyler Broda (link)

No doubt: “The asset of the decade will again be gold”
“Whatever [you] may think about what happened in Ukraine, the world is in a situation where oil is the barometer you want to follow. Gold is undervalued versus oil, so gold should do very well. If Russia is able to provoke higher oil prices through any number of means, we are going to see a replay of the massive spike in oil we saw 6 or 7 years ago. That was great time for holders of gold and silver as well. What is happening in China is also potentially very undermining of U.S. interests. The Chinese are growing closer and closer to Russia. The Chinese are going to need a lot of oil to build out the infrastructure they are planning. But all of this is setting the stage for a new reserve currency. I’ve felt this for a long, long time. And I think the three really powerful countries are Russia, China, and Germany. A reserve currency involving those three countries and gold is the direction the world is headed. So the implications for gold are incredibly positive. There is no doubt that the asset of this decade will again be gold. People forget that gold has only had one down year since 2001.” – Stephen Leeb (link)

What happens when this chart hits zero?
As Zero Hedge says: “The pool of potential capitulators is practically peopleless.” Which can only suggest… 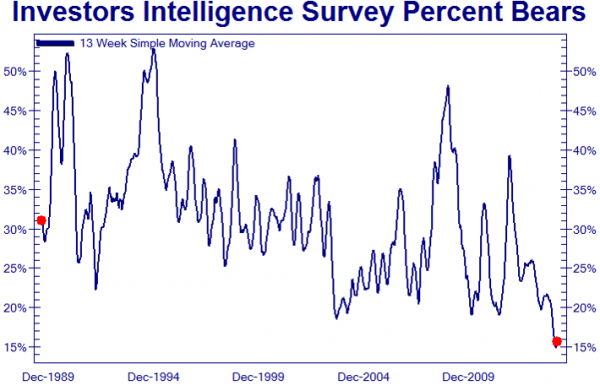