Home » Blog » Could these “scorched earth” tactics really be the dollar’s kiss of death?

Could these “scorched earth” tactics really be the dollar’s kiss of death? 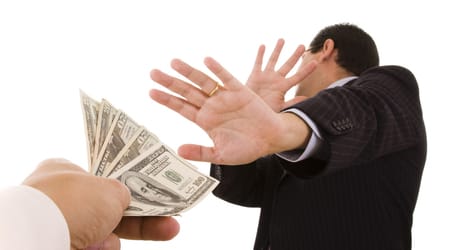 The situation between Russia and much of the Western world continues to heat up as each side maneuvers to provoke and retaliate against the other. The headlines are dramatic and jumbled. It seems no one is in control but everyone has guns pointed at each other.

Pro-Russian militants in eastern Ukraine are at the crux of the issues. Russia and Ukraine negotiated a deal that they were to lay down their arms and go home. Problem is, no one invited the militants to the negotiating table and after the peace deal was done and everyone sighed in relief, guess what? The militants did not go home.

Now those militants have seized/detained/captured a busload of German-led international observers. One of the group has since been freed, with negotiations to secure the release of the rest of the group now underway.

Russia is accusing the West of trying to exert more influence over Ukraine. The West is annoyed that Russia doesn’t seem to be able to control its pro-Russian separatists. It’s becoming increasingly impossible to know where the truth really lies.

Here in the U.S., what we all need to know is how global economics will be affected. The G7 is moving quickly to impose more sanctions on Russia. Standard & Poor’s Rating Services just downgraded Russia to one notch above junk status, which Russia has taken quite personally. And it is personal. Russia doesn’t even have access to bond markets to begin with, so in reality, it is easy to see why they took the move as a vindictive and petty slight.

But the turmoil has hit the Russians hard in other ways, even if the ratings cut is largely symbolic. They have had to raise their interest rates to try to stem capital flight in light of the turmoil and uncertainty. The sanctions aren’t helping either, and if broader ones are applied, one Russian presidential adviser has proposed to retaliate with a laundry list of “scorched earth” initiatives. The list represents some significantly aggressive maneuvers, which can be boiled down to four words: All Out Financial War.

And what do you know, just this morning the Obama administration has announced a new set of sanctions on Russian individuals and companies. Might this be the final straw for Russia?

While our financial exposure to Russia here in the U.S. is significant, it’s far from being deadly. So if these moves were enacted only by them, we could easily afford to say “Step up, Stroganoff” or “Bring it, Boris.”

But what if China and other BRIC countries were to follow suit? Actions such as what Russia has threatened could eventually lead to everyone having to pick an economic side, and there are many reasons to speculate that they might not want to stay in the dollar. What if trading in dollars has the mind-blowingly ironic effect of economically isolating a country from the rest of the world?

Can you imagine? One day you absolutely must use dollars to engage in global trade, and the next day dollars are the kiss of death? Keep a close eye on these events.

Leeb: This is how gold and silver will go “into the stratosphere”
“China and Russia are positioning themselves to have their currencies revolve around gold. As this becomes clear to the world, the price of gold will go into the stratosphere. It will be widely recognized that gold is coming back into the monetary system. This will also mean silver prices in the stratosphere. People will look at the last few years as just one long consolidation on the way to skyrocketing gold and silver prices. How often can investors buy insurance with eight times the upside in price? This doesn’t happen very often but this is one of those rare moments.” – Stephen Leeb (link)

These are the critical reasons we’ll see a rise in gold’s appeal in 2014
“A renewed weakness in the dollar and strength in oil and other commodities will add to gold’s appeal during 2014. Also, any major geopolitical concerns, particularly if there is a deterioration of the situation in Ukraine, will add to gold’s appeal. I also expect renewed physical demand from emerging markets like India and China. The World Gold Council recently forecast that Chinese gold demand will rise 20% by 2017 from the current level of 1,132 metric tons a year.” – Peter Schiff (link)

In the last 25 years, King Dollar more like court jester. And gold…?
“Many people invest in commodities. Let’s see how commodities have done since CNBC began. Now, the dollar we know has been dismal. King Dollar, more like a court jester. It’s down 18%. Gold – up 239%. Not a bad return.” – Brian Sullivan (link)

U.S. exports stunning amount of gold to China
“As the West continues to play games with Monopoly money and Derivatives manufacturing, the East accumulates as much gold as it possibly can. While Main Stream Media and its Banker cohorts release bearish $1,050 price targets for gold, the Asians and Indians smile as they build the largest amount of gold stocks in the world. I get a real kick at the degree of negative sentiment coming from many gold and silver investors. Who said this was going to be easy? It’s simply amazing to watch a DIEHARD gold or silver bug become bearish and downright nasty now that times are tough. However, this is exactly what the Fiat Monetary Authorities had in mind. Unfortunately, many have fallen for their plan… HOOK, LINE & SINKER.” – Steve St. Angelo (link) 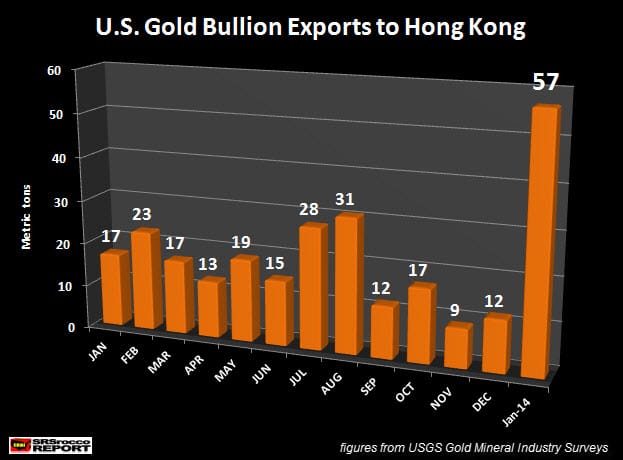