Home » Blog » Why aren’t you? (The simplest of cases for gold and silver)

Why aren’t you? (The simplest of cases for gold and silver)

It was a wild week, both at home and abroad. Banks in Cyprus announced they would confiscate up to 10% of savings accounts, which would set dangerous precedent for the rest of the Eurozone. Reports out of New Zealand suggested the same could happen there. And with the stock market rally showing signs of fallibility, yet another market analyst warns that a crash could be coming.

But we’ll be the first to admit: It’s all rumor and conjecture. All of it could come true; none of it could come true. (And already it looks as though a partial solution has been reached, with finance ministers agreeing to a bailout plan that guarantees deposits under 100,000 euros.)

What no one can argue, however, is that Central Banks around the world are taking physical possession of gold at a rate higher than any in the last half century.

Why are Central Banks snatching up gold as fast as possible? It’s simple: They’re protecting themselves and their paper currencies with hard, tangible assets. Which begs the question…

If the Central Banks are rushing to back their paper with gold and silver, and you haven’t already done the same, why aren’t you?

No one can predict the future. The Central Banks can’t. The “experts” in the media can’t. We can’t. But what history has proven is that paper currencies and paper assets can be worth no more than the paper they’re printed on. Gold and silver are real, tangible assets that WILL ALWAYS HOLD VALUE.

Central Banks know it. The “experts” know it. (Even if they don’t always admit it.) We know it. You know it too.

If you aren’t protecting yourself and your family from whatever may come in the future, why aren’t you? Move to physical gold and silver today.

Texas may start hoarding gold
“You’ve got the state of Texas standing up for you if the federal government tries to do what they tried to do in 1933, which is take the people’s gold… Personally, I think this is a game changer in terms of the way institutional investors are going to look at gold.” – Jim Rickards (link)

Several warning signs flashing; stock sentiment turning bearish
“[The S&P 500] is as overbought as it has been in over five years… Investors need to take this as a warning and take action to protect their portfolios.” – Rick Pendergraft (link)

Retirement crisis: Impoverished seniors on horizon
“The sad truth is that Americans do almost no thinking about what kind of retirement they want. They mistakenly assume that Social Security is a retirement program, when in fact it is a supplemental retirement program. The three legs of the retirement ‘stool’ – Social Security, a pension, and private savings – have all seen some shrinkage in the past few years.” – Bob Pisani, CNBC (link)

When will the Fed tighten policy?
The Fed’s moving (and backpedaling) target. 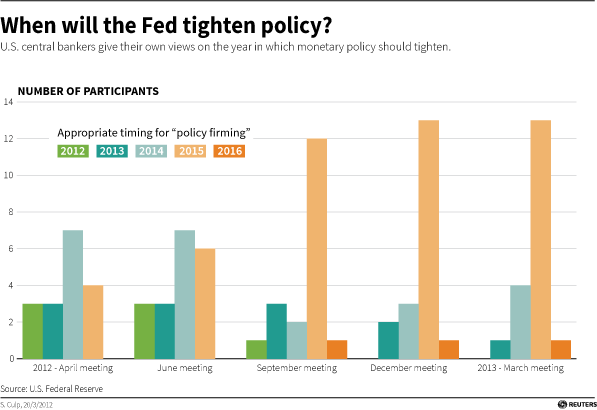