Recent years have seen the American and Japanese central banks move in lockstep, with each trying to outdo the other in the escalating global currency wars. Both have feverishly printed money. And as a result, both have seen their stock markets rise on artificial waves of liquidity to new heights.

The party may be over for Japan. On Thursday, its Nikkei Stock Average plummeted 7.3%, leaving millions to ponder the fate of their portfolios that are stashed in stocks.

Of course, no one knows for sure where the markets will head. But if you read this Market Update each week, you already appreciate and understand Gold and Silver’s significance as a way to preserve your savings:

You already get it. So why try to time it? Get started today.

Fears of the ‘beginning of the end’ for Japan as bond market buckles
“At some point, the [Japanese government bond] market is going to crash. The crucial question is whether they can prevent the banking system from being hurt? It will be tricky, and I am not sure the BoJ has thought this through.” – Professor Richard Werner, author of Princes of the Yen (link)

Today’s prices a bargain – whether or not we are near absolute bottom
“In the short term, it is pretty much impossible to tell when prices have bottomed until after the fact. Instead of trying to guess the exact day or the specific price that gold and silver will turn back up, I take the long-term perspective that if gold surpasses $5,000 and silver exceeds $150 (which I consider to be questions of “when” not “if”) it won’t really matter whether someone now pays $1,700 or $1,350 for an ounce of gold or $22 or $35 for an ounce of silver. In other words, I consider today’s prices to be a bargain buying opportunity whether or not we are near the absolute market bottoms.” – Patrick A. Heller, ANA 2012 Harry Forman Numismatic Dealer of the Year Award winner (link)

Gold and the Fed’s ungraceful attempt to exit QE
“[The Fed] famously failed to see what some of us regard as the most obvious bubble of our lifetimes, namely the terrific distortions in residential house prices, and in residential mortgages. So, to say the Fed is going to gracefully and without cost exit its policy of unprecedented money creation and experimentation is to give the Fed many, many benefits of the doubt. And I think it’s prudent to prepare for an ungraceful, noisy, and distorting exit.” – Jim Grant, Founder of Grant’s Interest Rate Observer (link)

Four signs we’re in a dangerous bubble
“Instead of seeing central banks as sophisticated stewards of intricate monetary policies, I view them as serial bubble-blowers and reckless debt-enablers whose only response, when confronted with the inevitable consequences of their actions, is to serve up more thin-air money at an even cheaper rate. And when that doesn’t work, then they simply try even more of the same, but in larger quantities.” – Chris Martenson (link)

What happened the last time we saw gold drop like this?
“We have seen two other instances of disorderly ‘hurried’ selling [of gold] in the last five years. In July 2008, gold quickly dropped 21% – seemingly pre-empting the Lehman debacle and the collapse of the western banking system. In September 2011, gold fell 20% in a short period – as Europe’s risks exploded and stocks slumped prompting a globally co-ordinated central bank intervention the likes of which we have not seen before. Given the almost-record-breaking drop in gold, we wonder what is coming?” – Zerohedge (link) 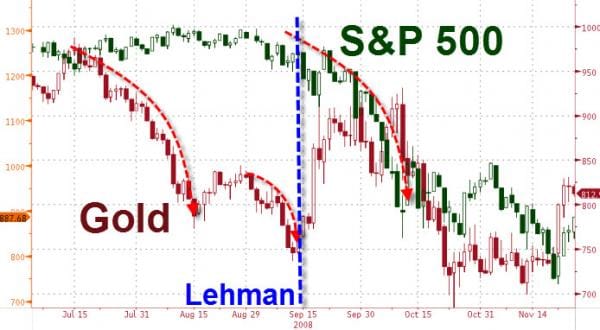