These are no sane times for our economy and monetary system. So we don’t fault you if you’ve forgotten how it usually is.

In a sane economic environment – that is, when the Fed isn’t flooding our economy with billions upon billions of dollars each month – gold and stocks usually move in opposite directions. So for the investor who only holds stocks and other paper assets in their portfolio, the diversification that gold provides is critical.

But thanks to “Helicopter” Ben Bernanke and his program of Quantitative Easing, these are no sane times for our economy; what’s up is down, and when gold has gone up, so have stocks. Just the other week, when Bernanke announced that QE would continue at its current levels, gold shot up… as did equities.

Today we face a “fork in the road” situation, one that could break the tit-for-tat relationship that gold and stocks have recently shared. And fortunately we have a roadmap for how it may play out, because we experienced this same scenario just a short two years ago.

Throughout the start of 2011, gold and equities shared the same relationship that they have so far this year, generally moving in tandem. But that changed in July, when we hit a significant fork in the road: The prospect of a government shutdown and a tooth-and-nails debate in Washington over the debt limit. For a brief moment of time over the next couple of months, the market came to its senses: A strong stock market isn’t built on the Fed’s monetary policies, a strong stock market is built on an economy and government that are sturdy and functional. With sanity prevailing, stocks plummeted over the next two months while gold soared.

Today we face the same “fork in the road” moment. In the coming weeks, our representatives in Washington will battle over the budget and debt ceiling; and this time it could be worse, with investors already fretting in an alarming fashion that the U.S. will default on its debts. So saner heads may again prevail, and we could very well see the same divergence in gold and stocks that we saw in 2011.

Could this be the moment that breaks the recent correlation between gold and stocks? Even if not, it will happen at some point. So if you don’t already have at least a portion of physical precious metals in your portfolio, this “fork in the road” moment may be as good a time as any to get started.

Gold most closely correlated to debt ceiling
“My Chief Strategist Mike Stojsavljevich concluded that gold prices correlate most accurately with how close our national debt was to hitting the federal debt ceiling. I was fully expecting them to come back with interest rates. All of a sudden they go ‘debt ceiling.’ I go ‘What? What are you guys drinking?’ For the last four years, there’s been this lockstep of gold prices along with the debt ceiling… Once the debt ceiling is raised, then that will be another trigger for gold to rise again.” – Former U.S. Mint director Edmund Moy (link)

“More confident than ever” in gold and silver
“We have positioned ourselves in things that will benefit tremendously from the coming chaos such as precious metals… I am afraid that the set of circumstances which will give us $70, $80 or $100 silver might favor me personally, but they wouldn’t be good for the bulk of the people in the United States… I am afraid that the average person in the United States has no idea what’s going on. So I have real concerns about this country and where the financial markets are headed as a whole. But I would say that I am more confident than ever that investors in gold and silver are going to be correct in their investment strategy.” – Rick Rule (link)

Countries positioning themselves for “massive loss of confidence in paper money
“[Countries] want physical custody of gold… [they’re] positioning for the day when there’s a massive loss of confidence in paper money… You’re seeing it with massive acquisitions of gold by Russia and China taking place through channels that bypass the London Bullion Market Association… where they minimize their market impact, which is a smart move. That’s what you would do if you were trying to buy gold and not run up the price. You would do everything in secret and that’s what’s going on.” – Jim Rickards (link) 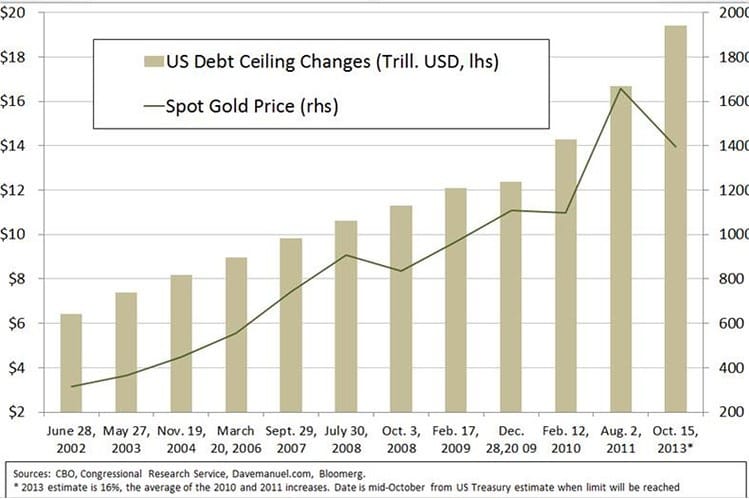