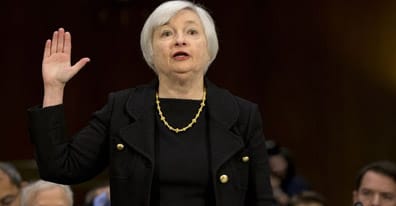 While no one has a crystal ball, it looks like those who have surveyed the global economic landscape and predicted higher gold prices for 2014 do have some credibility. Last week, gold broke $1,300 and closed Friday at $1,320 an ounce. Is this the start of a larger move to regain some (or all?) of what it lost in 2013?

Many have said gold should be valued well above its current levels – even above its all-time high near $1,900 – and many of the rationales they provide are with substantial merit. What of the detractors who say those people are crazy? Well, the naysayers also thought gold was overpriced at $400 back in the day. (And don’t you wish you had bought just a little back then – even if you had tucked away just 10% of your savings?)

The fact is, the miners can only extract gold at a tortoise’s pace, but the bankers are printing dollars like a hare, and we all know slow and steady wins.

Speaking of printing money, last week Janet Yellen had her first appearance as Federal Reserve Chair before the House Financial Services Committee. She may be somewhat relieved that Congressman Ron Paul has retired and is not available to give her the Ron Paul welcome. He would have had some doozies for her, as outlined in a statement that he released on Tuesday:

“Why should anyone give credibility to the statements that the Federal Reserve will continue tapering when both Dr. Yellen and her predecessor have made it clear by their words and actions that the Fed will not end easy money policies as long as the stock market and the banks are addicted to the morphine of monetary inflation?

“Where does the Fed get the moral authority to create money out of thin air, something many equate with counterfeiting, and to fix interest rates?

“How can a Chair of the Fed assume to have the wisdom to know what the money supply and the cost of borrowing (the rate of interest) should be?

“Is it possible to justify this authority to control one half of every economic transaction in a free market, especially when one looks at the results: depressions, recessions, excessive debt, inflation, bubbles, and the destruction of the middle class?

“I might also suggest that Dr. Yellen should not expect to have a pleasant tenure, as the policies she and her predecessors pursued will likely lead to a financial crisis that could very well dwarf the meltdown of 2008.”

As it was, in her testimony to Congress, Yellen toed the line on the taper started by Bernanke and skated by unscathed and unchallenged… at least for now. She is also promising to keep interest rates close to zero for quite some time, even after the taper is tapered out. (Yeah, because that’s not inflationary at all…) Meanwhile, there is ever decreasing demand for our debt.

It is brave and unexpected for Yellen to stand pat on the taper in the face of more weak economic data on retail sales and jobless claims. Some are blaming it on the weather. On the other hand, it could just be a weak economy. For whatever reason, Yellen is telegraphing that she wants out of QE via taper, unless… really REALLY bad news comes down the pike. Could it be that $4 trillion makes even the Fed blush? What have they done to our money?

As always, here at Birch Gold Group, we are your Fed watcher, slicing and dicing what this all could mean. In the coming weeks, look for more expert analysis: what has QE done, how has it missed the mark, why do they seem so anxious to get rid of it, are they truly anxious to wind it down? You’re going to want to read what we have lined up.

But while the guesswork might be interesting to some, for others, it is much more comfortable to simply hold some precious metals in their portfolio and worry less. If that’s where you are, give us a call. Or take the small first step of requesting an investment kit here. There is no cost or obligation to you.

Why gold might be headed for the next “up cycle”
“Despite the bank analysts’ predictions, on balance gold could well be headed for a new upwards move. Indeed it already seems to be happening, while the shortage of physical gold in the West, coupled with continuing, and possibly growing, demand in the East and in other emerging economies as people strive to protect themselves against what looks to be becoming another significant economic downturn, is limiting the capabilities of the Western bullion banks and central banks to keep a lid on gold price rises.” – Lawrence Williams (link)

What will cause gold to rise in 2014?
“There are many potential catalysts, but it is impossible to predict which event will be the trigger. The derivatives time bomb? Failure of a big bank? The sovereign debt crisis returns to the boil? The Japanese yen collapses? It could be any of these or something we can’t even imagine. But one thing is certain: as long as central banks continue their present money-printing ways, the price of gold will rise over time to reflect the debasement of national currencies. The gold price might not jump to its fair value immediately because of government intervention, but it will rise eventually and inevitably.” – James Turk (link)

Gold Demand in China at Record as Bear Market Spurs Sales
“As the domestic market offers little alternative choices – the equity market underperformed while the government discouraged investments in the real-estate sector – more of the growing wealth is looking to gold as a means to store value.” – Liu Xu, Capital Futures Co. (link)

Here’s China’s plan to get out of the dollar and into gold
“The massive flow of gold into the country does make it seem plausible that they [China’s authorities] could be moving in the direction of using gold in the effort to internationalize the currency and escape what is seen as a domineering dollar.” – Freya Beamish (link)

J.P. Morgan: Gold is Money and Nothing Else
“[The dollar] is not redeemable in anything. It shows up as both a liability and an asset depending on which balance sheet you look at. It is the instrument of an ever increasing web of outstanding debt obligations with neither the means nor the intent to repay. It has bought less and less year over year despite years of innovation and technology contributing to cheaper goods. By the Austrian economic standard it is quite simply a terrible money. That is why J.P. Morgan never considered it money in the first place. In his mind, ‘money is gold, and nothing else.'” – Dickson Buchanan, Jr (link)

This is why silver’s price to the upside is “incredible” – over $100
“Before this is over, there is probably going to be a ‘force majeure’ in the paper market because there are so many claims to such a small amount of silver. If that were to occur, people who owned the metal… would be the big winners… I am particularly fascinated with the fact that about a third of the industrial usage of silver in photography has gone away these past few years because of the rise of digital cameras. And yet, the industrial demand for silver has held more or less steady. New medical applications and use in the solar power industry have filled the demand. So the industrial demand is solid, yet there is very little physical silver in the world to meet that demand.” – John Embry (link)

Scary 1929 market chart gains traction
There are eerie parallels between the stock market’s recent behavior and how it behaved right before the 1929 crash. 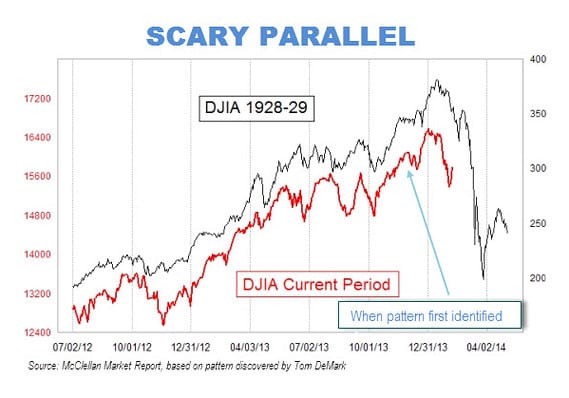