Gold miners face all kinds of factors. Cost, geographic, regulation, and market price all affect how much they pull out of the ground. Understanding how they operate and the decisions they make on production is a key part of the puzzle.

One of the very first introductions into how money works is through supply and demand. You may remember this from high school economics class. When supply goes down and demand goes up, prices rise. When supply increases but demand lags, prices fall.

So, when looking at certain investments and their price fluctuations, supply and demand can be the perfect place to start. It can get trickier than your high school teacher laid out, however. When something like gold increases in value, it isn’t always a direct result of one part of the supply chain or even on the demand side.

For starters, there are many different ways one can own gold. Coins, bars, ETFs, and even gold miners themselves play a role here; both supply and demand can fluctuate wildly from year to year in any one of those forms.

Yet, if the dollar weakens in a given year, the demand for a safe haven like gold coins can go up. The price is effectively a balance between the supply and demand of all parts of the system.

But one part that can never be ignored, even by those trading the spot price of gold and silver, is at the start of the system: the mining companies that actually extract the metals.

Underlying Factors at Play in Mining

Gold is the easiest of precious metals to study when it comes to mining. But this applies to all commodity producers. There are a number of underlying factors each miner has to consider and account for when making decisions on where, when, and how to operate. These are the major ones that many people who buy precious metals try to understand.

Gold is eventually turned into everything from bars kept in vaults to jewelry traded around the world. But for a mining company, the end-uses matter little. Mining companies are concerned with how much can they sell their gold for as soon as it is out of the ground.

The spot price of gold is the value it trades on the open international market. That’s what miners sell their gold for, and so it’s a vital number for them. When gold prices fall, miners obviously make less money on each ounce they pull out of the ground. But there’s a balance at play here. If gold prices fall too far, certain mines just aren’t profitable. So, a miner might make the decisions in low-priced environments to either cut back on production or stop production altogether at certain sites.

On the other hand, when gold prices rise, a miner might attempt to rapidly increase production or be more willing to spend on exploration to find new veins.

This is where the supply and demand comes in. High prices indicate high demand. So, a miner attempts to capitalize by supplying more, thus balancing the equation.

Input costs can include any costs involved with operating the mining company to extract their desired metal(s). For example, a miner has to consider energy costs to operate, one of the most important cost in the equation. If it costs too much to power a mine and keep the equipment running, why dig at all?

Another cost is the equipment itself. If a mining company finds a new location to begin operating, it typically has to price out the cost to buy and transport the large mining equipment.

Often, finding new veins or additional tributary branches of an old vein near its current operations is a godsend. The company can simply share resources or at least it already has infrastructure in place nearby. Finding a new site far away requires a large upfront cost.

This is the other side of the “coin” for miners. Even lower-priced gold might be worth producing if input costs are low as well. Profitability, or if a mine is economical to operate, is the name of the game.

Gold is found all over the world: from Canada to Australia and Peru to Ghana. Each place comes with its own governmental oversights, regulations, and taxes. Some governments even put restrictions on how much a private mining company can own of the mines themselves.

Countries like the United States have rather longstanding rules regarding all of these regulations and costs. A company deciding to open a new operation in the U.S. might have an easier time deciding than someplace else.

There are other factors related to consider as part of the regulatory environment outside of just rules on the business formation itself. Indonesia, for instance, has been a constantly-evolving place for miners. Not just company regulations, but the climate around workers’ rights and product ownership rules have all been much more fluid than elsewhere, although that may be changing.

These three factors – market prices, input costs, and regulatory environments – are the primary concerns for mining companies deciding to open up or continue to operate a mine.

Of course, gold trends and other outside influences can also greatly affect miners’ operations and profitability in nuanced ways.

Gold Trends and Other Market Considerations

While gold mining has been going on for millennia, it certainly hasn’t stayed the same and it only continues to evolve in modern days, particularly with the rapid development of new technologies and increased efficiency in mining methods.

New systems and models are being used to explore and identify new veins and the richness of old ones. 3-D modeling, geospatial software, and even virtual reality are helping exploration companies find gold around the world.

The process of mining itself is changing. According to General Kinematics, an equipment company involved in these new trends, miners are now able to “extract over 85% of minerals and 98% of metallic ores… without digging a shaft or endangering the lives of workers.” They are able to do this using modern surface mining techniques that simply weren’t available for the vast majority of mining history.

The takeaway here is that miners have become much more efficient and careful in how to explore and extract gold and other metals. This directly plays a role into the supply and demand of the commodities themselves.

Whereas throughout history, there have been large swings in production. From the California Gold Rush to Victoria Gold Rush, the global market has been forced to drastically change when a major new source of gold comes online. Nowadays, with such sophisticated software and techniques, the discovery curve has flattened. Modern technology has helped stabilize gold prices because gaps in supply and demand are much smaller.

The second trend you should understand when it comes to gold is the prices themselves. Modern techniques have certainly helped bring volatility down in the pricing market. But gold’s role in the global economy has shifted as well.

For much of the 18th and 19th centuries, gold was used to back fiat currencies as the “gold standard.” It began to collapse throughout the 20th century, including the 1971 release of the U.S. from the gold standard by President Nixon. And as of today, no major currency is 100% backed by gold.

You can see what this move did to the price of gold in the years following the U.S.’ official departure from the gold standard in 1971: 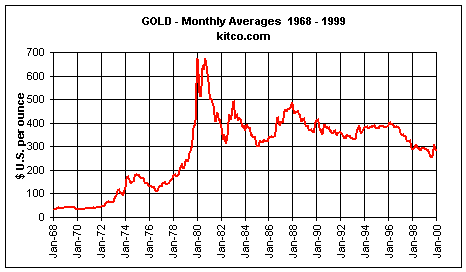 But note that after gold was allowed to float freely for some time, prices stabilized. This pattern repeated even more recently.

After the financial crisis in 2008-2009, gold spiked once again. One of the rationales behind this more recent move was for people to protect themselves from fears of inflation following the widening of central banks’ balance sheets to deal with the crisis. But again, after a spike, prices settled into a sideways pattern: 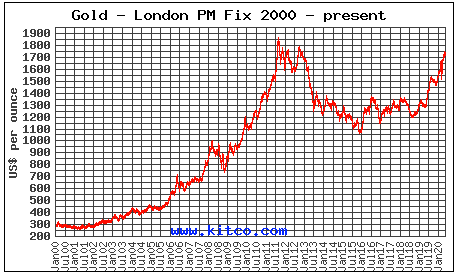 In fact, for a few years, that dip following the spike put miners in a tough position. Costs too had risen alongside the price of gold. Energy costs especially crept higher as oil was hitting its all-time high during the crisis. That left thin margins across the board.

When gold retreated back to its stable price range between $1,100 and $1,300 per ounce, costs rose to around that same level. All-in sustaining costs—the modern standard to compare mining costs per ounce—rose to around $1,100 by 2013.

This push-and-pull over mining profitability wasn’t great for the mining industry, but it did wonders for stabilizing the production and price of gold. It created several years of parity between supply and demand. But that’s changing as you can see from the tail end of the above chart.

Going back over the last 100-plus years, gold has remained pretty stable when it was used as a backing to monetary systems. Since gold and the dollar broke from one another, we have seen peaks and valleys in the price of gold. But we’ve also seen inflation take off at times: 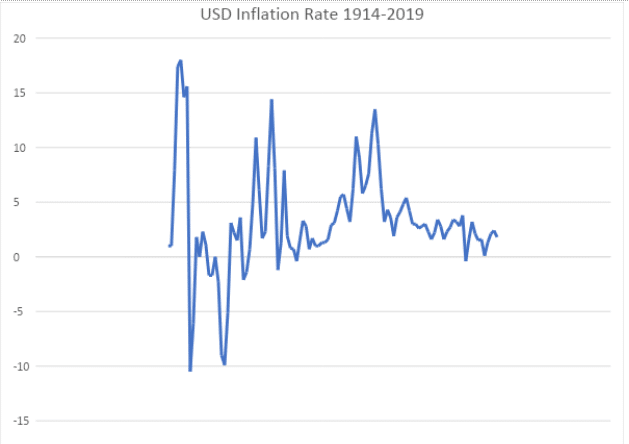 Previously, spikes in inflation only occurred during world wars.

With a second round of central bank stimulus in early 2020, fears over inflation crept back into people’s minds. It is one good reason why gold started heading higher in price at that time.

But this attractiveness is short-lived; for many, “paper” gold is regarded as not the best way to invest in gold because of how rapidly it declines when gold isn’t at its peak performance.

That’s why, for long-term stability and price protection, many people consider owning the physical gold itself as the best option.

Obviously, understanding the core of how mining affects prices and profitability is one thing. But keeping abreast of trends and changing markets is crucial to remain a well-informed investor.

Here are a few resources that should help you stay up to date on all you need to know about this side of the precious metals industry.

Most precious metals owners are happy knowing that their physical gold works as a hedge against other assets like cash, stocks, and bonds, and they cite the long-term stability of gold as a reason for their purchase.

But we can’t have a gold industry without the miners pulling it out of the ground in the first place. So, as supply and demand, regulations, profitability, and other factors move in the mining market, it can have a real impact on the spot price market as well.

Keeping up to date on how and why both markets are moving can help any buyer, consumer or investor stay ahead of the game.