Home » Blog » Is 2008 About to Repeat Itself? Deutsche Bank Channels Lehman Bros From the Grave

Is 2008 About to Repeat Itself? Deutsche Bank Channels Lehman Bros From the Grave

Deutsche Bank’s stock has fallen to unprecedented levels, levels not seen in 30 years. Could the big bank be the next Lehman Brothers? 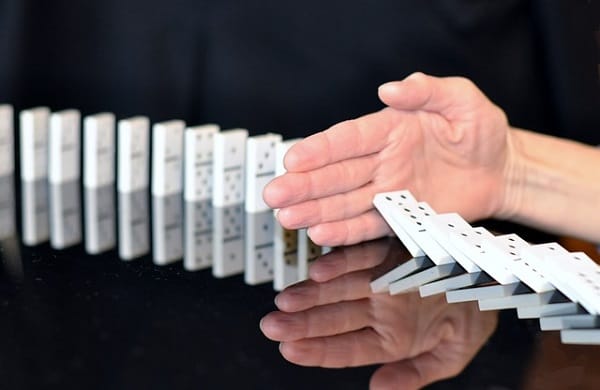 The global economy is in a delicate state right now. Despite the popular notion that markets are in recovery mode from the Great Recession that left utter desolation in 2008, the economy is at a critical turning point that could lead us to relive another financial meltdown that’s just as bad — or worse.

Plenty of indicators already look strikingly similar to how they did in 2008; the dominoes are all lined up. The only thing that’s missing is the collapse of a major world bank to tip the first domino and set the whole thing back into motion.

That’s where Deutsche Bank comes in.

Already sitting on tenuous footing and recovering from several scandals, Deutsche Bank’s positioning was less than ideal to begin with. Plus, the bank’s restructuring plans and capital shortcomings left it vulnerable and exposed.

Little did Deutsche Bank leadership know, they were about to get hit with a one-two punch with (1) the passing of Brexit and (2) a hefty downgrade from Barclays, both happening within a couple weeks of the other. To make matters worse, Deutsche Bank holds a staggering amount of derivatives and is currently operating on extreme leverage.

These toxic factors are pushing Deutsche Bank shares down so rapidly that the question is changing from “if” the bank will go under to “when.” The bank’s stock has fallen to levels unheard of in more than 30 years, and the bleeding still hasn’t stopped.

The whole thing is starting to look eerily reminiscent to how Lehman Brothers failed back in 2008 and sent the economy into a complete tailspin. And considering the dozens of other analytical parallels between 2008 and 2016, it’s becoming a major concern whether or not this could be the last nail in the so-called recovery’s coffin.

However, there’s one thing you can count on in any financial crisis, even the early stages of one: Precious metals almost always get a lift as investors seek out safe haven investment options. It’s been a reliable trend in every major market dip since the Great Depression, and it’s certainly true today.

Look no further than the growth in gold and silver markets so far in 2016 for proof. Increasing uncertainty led to notable upward movement throughout the beginning of the year, and after Brexit, gold had gained over 25% for the year, and silver over 40%.

This quote collected by Bloomberg from the brokerage director of GoldCore Ltd. sums up the status of the precious metal markets perfectly:

“Macroeconomic risk and geopolitical risk were already setting gold and silver up for a good year – the Brexit fall out has just been the icing on the cake,” said Mark O’Byrne, a director at brokerage GoldCore Ltd. in Dublin. “These metals will continue to outperform as market conditions remain unstable.”

And it isn’t just people in precious metals who are singing the praises of gold; plenty of other authoritative commentators are doing so as well. According to an article by Reuters documenting a recent interview with CEO of DoubleLine Capital LP Jeffrey Gundlach, Gundlach has high hopes for gold and sees it as the “best investment amid fears of instability in the European Union and prolonged global stagnation, as well as concerns over the effectiveness of central bank policies.”

“Things are shaky and feeling dangerous,” Gundlach said to Reuters. “I am not selling gold.”

If the warning signs surrounding Deutsche Bank are valid and the bank ultimately fails, there’s no telling how high gold and silver markets could go. And even if Deutsche Bank miraculously survives until next year, the apprehension that’s bound to mount up in the meantime is likely to fuel more gains for gold and silver too.

Either way, the current climate gives Americans a compelling reason to make gold a key consideration when diversifying and protecting their savings.

The ‘Brexit’ will likely continue to rattle world wide markets. Find out why here.