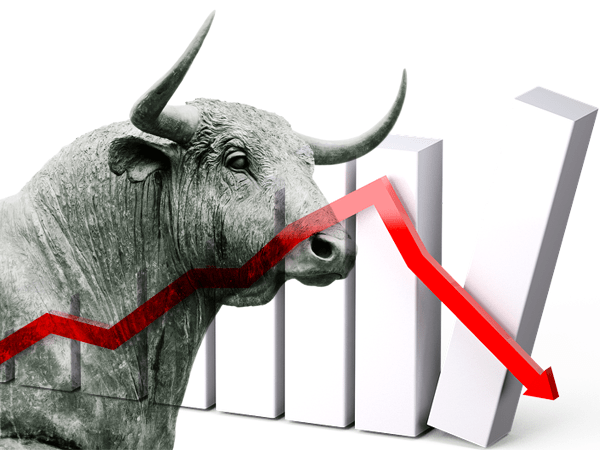 Last week we reported on a potential EU market crash tied to Brexit, and how that could affect the U.S.

But the U.S. also has economic problems to contend with, namely an imminent recession of its own. Some globalists have even provided their own dire warnings.

As with all “good” things, the bull market that’s been chugging along since the 2008/2009 recession looks to be coming to an end.

And signs in 2018 seem to be signaling the beginning of that end.

According to a feature in Barron’s, 2020 could be the year the economy goes off a cliff:

For one, the economy has been juiced by the tax cuts and fiscal-spending package that Congress passed at the end of 2017—a stimulus that should last another year or so. Just as its effects are fading, the Fed will be continuing to push interest rates higher and shrinking its $4 trillion balance sheet.

Put them together and you have a drag big enough to slow the economy, while stamping a bright expiration date on the bull market: 2020.

And it isn’t just permabears who are gloomy of late. Ben Bernanke, the former chairman of the Federal Reserve, recently said that after two years of stimulus, “in 2020, Wile E. Coyote is going to go off the cliff and is going to look down.” 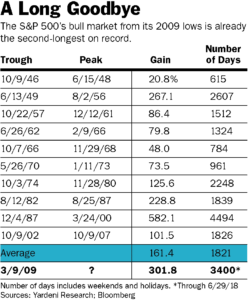 The current bull market has been extraordinarily long at 3,400 days (see chart), and is the second longest on record since the 1987-2000 bull market.

That bull market started with Black Monday in 1987, gained 582% overall, and ended with the historic “dotcom” crash in 2000.

During that “dotcom” correction the NASDAQ lost 78% very quickly, with many ripple effects afterwards including new standards for how digital startups would be handled.

Then, after the short period of growth starting in 2001, the market quickly crashed severely again in 2008, caused by irresponsible lending practices and the resulting massive housing credit crunch.

And now, after all that, the U.S. economy is getting ready to “go off the cliff” again…

The “Goldilocks Economy” Goes from Party to Hangover

This lackluster growth is following a similar pattern to the growth between 1987 – 2000, and has resulted in a modest 302% gain since March of 2009. Market optimists over-rely on this trend, thinking the “party” is going to keep going.

Well, it appears the party is ending and the hangover is just beginning…

First, the “weight” of the defensive sectors in the S&P 500 dropped to an all-time low of 15% according to Leuthold Group’s Chief Investment Strategist Jim Paulson, who issued a stern warning:

And for investors betting that the diversity of their index ETFs will save them, the Leuthold Group’s chief investment strategist, Jim Paulsen, notes that the weight of defensive sectors in the S&P 500 has dropped to 15%, an all-time low. “Investors should be aware that defense has left the building,” Paulsen warns.

Next is the tax stimulus. Much like a shot of adrenaline, the effects of any tax stimulus are not meant to be a long-term solution for the markets.

In fact, like the Bush-era cuts, there is “a big hole left to deal with” as identified by Morgan Stanley chief U.S. economist Ellen Zentner.

This hole has to be addressed before the effects of the tax cuts wear off. And just as that stimulus wears off, the Fed’s monetary policy could be strangling the market.

And the rates already priced in have no precedent, according to Alan Ruskin of Deutsche Bank as quoted in Barron’s, and also noting the reckoning right around the corner (emphasis ours):

The market, meanwhile, is pricing in rates hitting 2.6% at the end of 2019 and going sideways from there. Those paths are unlike any seen before. “What’s priced in has no modern monetary policy precedent,” Ruskin says.

Market indicators are also pointing toward 2020 as a year of reckoning for the stock market.

And stocks leading up to the “reckoning” look to be increasingly more volatile.

With the headaches caused by increased volatility in unprecedented market conditions, is there any aspirin?

What this “End” Signals for Gold

Even though there is significant risk of a serious recession, gold will likely produce the expected response to tough market conditions.

In fact, prospects look good for $1,400 per ounce according to Simona Gambarini from Capital Economics:

“We are more positive on the prospects for prices in 2019 and 2020 when a cyclical slowdown in the U.S. economy will force the Fed to end this tightening cycle sooner than it anticipates and to start cutting rates in 2020,” Gambarini said. “Our end-2019 and end-2020 forecasts for prices are $1,350 and $1,400 per ounce, respectively.”

But no matter when gold surpasses these benchmarks, two things are certain:

1. The 2nd longest bull market looks to be coming to a close.
2. Gold performs well in uncertain markets.

Plus, other countries are already reducing their exposure to U.S. Debt, and threat of a longer-term trade war on multiple fronts is looming near.

So take this rare opportunity to prepare your portfolio in advance for weak policy response, because the “end” is nigh.