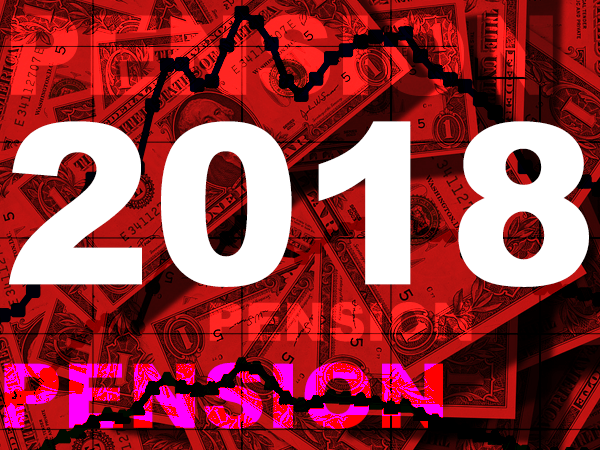 A lot happened in 2018, and while it would be a challenge to cover them all, there are three big trends that appear to have defined this year economically. And, each of them had an impact on retirees, investors, and the overall U.S. economic picture.

Here’s a review of 2018 in light of each of these three, impactful trends…

On a local level, a public pension “Hurricane Harvey” hit a small town in Illinois. The city that once had over 20% unemployment, and property tax rates over 5%, had a major pension shortfall. Ultimately, this small town didn’t know how to make ends meet.

But the pension problem isn’t limited to this one small corner in the U.S.

New Jersey has its own pension conundrum too. Their plan back in April was to tax everything and raise enough revenue to cover their shortfall. This month, it appears they aren’t doing too well, according to a Volcker Alliance study:

It’s a math test that New Jersey, Illinois, and even Texas are nearly failing: How to pay for billions of dollars in unfunded liabilities for public-employee pensions and retiree health care.

All in all, states topped $1.4 trillion in underfunded pensions, according to the most recent data available. The story got even more dire worldwide when Sovereign Man reported a pension savings gap approaching $400 trillion. This amount is more than 20 of the world’s largest economies.

This is indeed a crisis. And it could become a crisis for everyone else, whether you have a public pension or not. Especially, if services get cut or tax dollars for a federal bailout are needed. Plus, if tax dollars are needed to rescue failing pensions, there are a whole host of other consequences for lawmakers following that bailout “script.”

But it’s not just public pensions. Some of the world’s biggest corporate pensions like GE and Bristol-Meyer Squibb are also hanging by a thread. Borrowing capital to pay pensions and closing pension programs altogether are two, non-ideal options that big corporations appear to be taking during these bumpy economic conditions.

And finally, Sovereign Man recently reported that two of the biggest pension giants in California are showing signs that the pension idea is crumbling like a worn brick:

Over the past 10 years ending June 30, CalSTRS returned an annualized 6.3% a year – well below its target. And CalPERS has returned a dismal 5.1% over the same period.

It sure seems like public and private pensions are going underwater. We will certainly continue keeping an eye on both in 2019.

At the beginning of 2018, experts had forecasted four rate hikes. They identified the rising inflation as one possible cause.

At the second rate hike of the year, it seemed likely four would happen. The Fed justified the second rate increase on the premise of a low unemployment rate of 4.1%. Of course, we know that the official unemployment figure can be misleading because people who aren’t looking for work aren’t figured into it.

The Fed’s risk-taking and apparent blindness to reality were coming to light. In fact, it was revealed from the minutes of the June FOMC meeting that they tossed out a previously reliable signal of economic recession, the yield curve between 2 and 10 year treasury bonds.

This “canary in the coal mine” was chirping loudly at 27 basis points back in July. Since then, it’s been as tight as 11 basis points (just before the current market correction). Currently, it remains tighter than it was in July, at 20 points.

Rate hikes would continue to plague the Fed for the rest of 2018, culminating in a 10-year high rate after their November FOMC meeting statement.

Then in December, Chairman Powell sent the market into a tailspin when he announced the fourth rate hike for the year. The resulting “lose-lose” scenario may have set the table for another roller-coaster ride for 2019.

No matter how it all pans out, we plan on keeping a close eye on the Fed’s meeting announcements. And if pension problems and rate hikes weren’t enough to make an impact, debt also reached impressive highs in 2018.

You might think with that much debt, U.S. corporations would keep a closer eye on their own “pile” of obligations. But it appears the opposite is true. Even Elon Musk joked about Tesla’s enormous debt back in April.

Except, as Sovereign Man pointed out, the joke wasn’t very funny:

And Tesla isn’t the only company buried in debt. Apple, Netflix, and even Comcast are also taking on huge amounts of debt. But then, in a strange move, they paid out a large portion of these funds to investors.

Unfortunately, this corporate “sleight of hand” may contribute to a longer-term market correction in 2019. The Week called it a “money hose going nowhere.”

But consumer debt also increased by at least 47% since 2008, going from $2.6 trillion to $3.82 trillion. Another surprising increase was student loan debt, rising a staggering 146% since the financial crisis ten years ago.

And subprime mortgages, one of the main causes linked to the 2008 crisis, are still a prime credit offering in 2018. It looks like banks aren’t learning their lesson.

Eventually these giant credit “bills” will all have to be paid, and it’s uncertain how they will be taken care of. Debt in all of its forms will be a topic for years to come.

Right now, the Dow is down over 4,000 points since October 3. And as we’ve alluded to all year long, building resiliency into your retirement portfolio is critical to keep it afloat during market correction.

Depending on who you listen to, there are a number of things retirees should and shouldn’t do during uncertain markets. As always, any advice you come across should be given due diligence.

But one thing is clear, uncertain markets can do damage to retirement portfolios that aren’t as resilient as should be.

Assets such as gold and silver should be considered for any portfolio “resilience” plan. They’re known for their ability to perform well in markets like this one, as well as their protection and stability.

But don’t wait to do a review of your portfolio, and then form a good plan if needed. Preparing now would serve you well in what could be a tough year ahead.