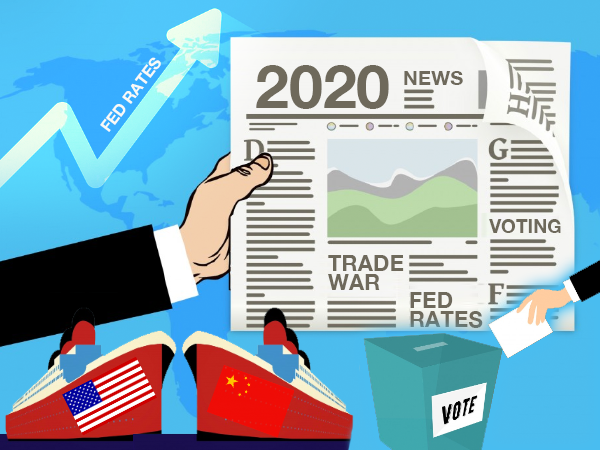 As we enter the year 2020 (and a new decade), it’s important to keep in mind how long it has been since the last major recession started in the U.S. — more than 11 years now.

Since the economy generally operates in cycles, and the yield curve has already inverted, the next recession could be right around the corner.

With that in mind, here are three “big picture” economic trends that you should keep an eye on in 2020:

A recent poll revealed that “70% of Wall Street thinks the President will be reelected in 2020,” according to CNBC. The same article went on to explain why this could have a big impact on the economy:

Presidential elections can have important implications for financial markets based on what traders believe the elected candidate will prioritize while in office.

Whether Wall Street ends up being right or wrong about who is elected President, the 2020 Election is sure to have a dramatic impact on the economy. For example, the Dow rallied 450 points in the eight days following the 2016 Election and has hit dozens of record highs since then.

A story directly tied to this year’s election will be the impeachment hearing that could soon take place in the Senate.

There is uncertainty surrounding the impeachment hearings themselves, and according to an article at The Conversation, that’s because of partisan politics:

What exactly constitutes a “high crime” or “misdemeanor” has always been open to interpretation, but it is clear that partisan politics plays a role.

Those partisan politics may be why no American President has ever been removed from office following impeachment.

And Democrats who voted on the Articles of Impeachment in December are concerned the President won’t be removed. According to a recent article from The Atlantic:

The Republican-controlled Senate will never vote to convict Trump, they argue, and an impeachment process with no real consequences for the president might only serve to dishearten Democratic voters ahead of the 2020 election.

Of course it remains to be seen how the Senate will actually vote. But no matter which way the vote turns out, the economy is likely to respond dramatically to the resulting uncertainty.

After all, according to Money Morning, “the stock market hates uncertainty.” Which brings us to the next major trend you should keep an eye on.

Trend #2: The Trade War Between the U.S. and China

The U.S. trade war with China has been going since at least early 2018. It seems like any time POTUS makes a statement about it, the economy responds in spades.

But according to ABC News, the President’s “tariffs and the retaliation by countries he has targeted have resulted in job losses and higher costs for U.S. manufacturers, negatively affecting them overall.”

To seemingly ease tension in the markets, on New Year’s Eve, POTUS said “he will sign the ‘phase one’ trade deal with China at the White House on Jan. 15.” This early morning comment by the President didn’t appear to have much effect, however. The Dow remained mostly flat after he announced the news.

As 2020 begins, the trade war with China appears to be moving into “Phase 2,” according to Foreign Policy:

Its next chapter will be fought through export and import controls, investment restrictions, and sanctions—and the United States should prepare itself now.

So it appears that instead of ending the trade war, in 2020, it will be shifting into another phase that has the potential to escalate like the first phase did.

The potential for more price increases on more consumer items and the ripple effects for U.S. businesses could overshadow the President’s optimism about where things are headed.

Of course, Federal Reserve Chair Jerome Powell and the Fed could also send the economy on a roller coaster ride.

One of the main economic stories in Q4 2019 was the return of a confusing repo market operation that looked eerily like the Quantitative Easing programs that the Fed utilized to pull the U.S. out of its last major recession.

On several occasions the markets were oversubscribed, meaning the Fed offered a certain amount and the markets needed way more than they were offering.

The Fed plans on continuing to fund these operations with hundreds of billions of dollars well into 2020, according to CNBC. That means the Fed’s balance sheet also will continue growing well into next year.

If these operations fail, that would spell disaster for the lending markets.

But on top of that, explosive price inflation may be right around the corner thanks to Powell allowing inflation to run hot well into 2020.

Rising price inflation would be bad enough on its own, if that happens. However, back in 2018, the Fed also claimed it would be raising rates through 2019 with its “dot plots.”

That didn’t turn out so well, as they ended up cutting rates three times last year, from June to September.

So who knows what Powell and the Fed will do as we head into 2020? Whatever happens, it’s sure to create even more uncertainty in the markets.

Best to make sure you prepare your retirement for that uncertainty.

As we move into what will surely be a tumultuous and eventful year, now is a good time to ask yourself some questions related to the trends we’ve highlighted here, like:

It’s also an ideal time to consider making your retirement resilient to major changes in the U.S. economy as these three trends play themselves out.

But don’t wait. Consider adding precious metals like gold and silver to your asset mix, which tend to perform well under the uncertainty to come.