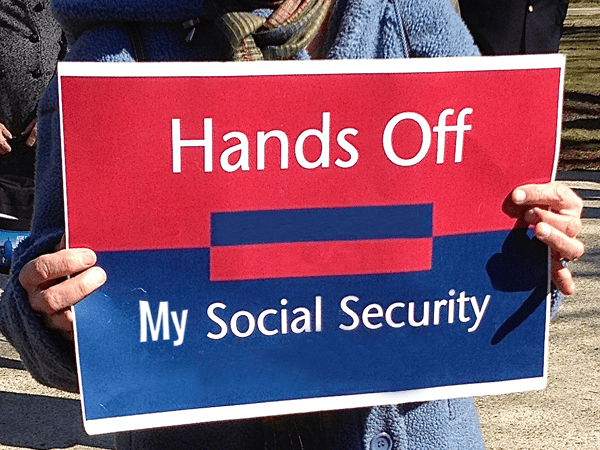 Donald Trump was an ardent defender of Social Security on the campaign trail, but his cabinet pick for the Office of Management and Budget (OMB), Rep. Mick Mulvaney, wants to take radical steps to fix the program. If Mulvaney is approved by the Senate, there are three big ways he could go after Social Security.

If you are planning on eventually collecting benefits from the program, you should take note.

Your Benefits Are On the Chopping Block

As it stands today, Social Security is at risk of facing a major shortfall as soon as 2034. Depending on how those in power react in the coming years, insolvency of the fund could be just around the corner.

This means that for some Americans, receiving Social Security benefits in the future is far from a sure thing. Even today’s middle-age workers might find themselves left out in the cold when retirement age comes.

However, even if policymakers like Mick Mulvaney, Trump’s pick to run the OMB, step in and intervene, the situation still looks grim. Here are three things Mulvaney might do to “fix” Social Security that would burden taxpayers and beneficiaries, while still leaving the viability of the program up in the air.

The first and most obvious way to prop up Social Security is to cut what it pays out to beneficiaries. Trump has said that such cuts are off the table, but Mulvaney’s statements in his Senate confirmation hearings stand in stark contrast.

According to the Wall Street Journal:

Rep. Mick Mulvaney, President Donald Trump’s pick to run the Office of Management and Budget, said on Tuesday during his confirmation hearing before the Senate Budget Committee that he would advocate for reducing spending on Social Security—that is cut Social Security benefits.

“I have to imagine that the president knew what he was getting when he asked me to fill this role,” Mulvaney told the Committee.

Mulvaney is being careful not to say anything to confirm or deny his intentions to make direct cuts to Social Security, but it isn’t hard to read between the lines here. Back in 2009, he called Social Security a ‘ponzi scheme’ and insisted the program as we know it should be brought to an end. Chances are slim his views are drastically different today.

Whether you agree with the way Social Security operates or not, big cuts to the program would be a painful blow to millions of Americans nearing or living in retirement.

In 2016, every American paid 12.4% of their income under $118,500 to Social Security, with most splitting that responsibility 50/50 with their employer. Depending on wage inflation and the overall health of the program, that cap can be adjusted by the Social Security Administration (SSA) and people like Mulvaney.

The SSA already announced the cap would increase by 7% (to $127,200) in 2017, meaning a large chunk of high-income workers will suddenly start paying an extra $539 in taxes every year.

But Mulvaney is ready and willing to push the cap even higher. During his confirmation hearings, he made a point to emphasize that his pledge as a congressman to oppose tax increases would not extend to his service in the OMB.

Option #3: Raise retirement age so benefits are paid out later and for fewer years.

Today, the age at which Americans can receive full benefits for Social Security is set to gradually increase to 67 for anyone born after 1960. But further increases aren’t out of the question.

So even if Social Security stays solvent, the length of time Americans can draw off the program during retirement could shrink significantly.

President Donald Trump’s pick to head the White House budget office said Tuesday that increasing the retirement age for Social Security should be considered, as Democrats pummeled him over protecting that program and Medicare.

Mick Mulvaney, a Republican congressman from South Carolina, made the statement during an exchange with Sen. Lindsey Graham.

“Do you think we need to look at adjusting the age yet again because we live longer?” asked Graham, also a South Carolina Republican.

“I do, yes sir,” Mulvaney replied.

If Not Social Security, What Can You Count On?

Regardless of what happens over the next decade, the long-term prognosis for Social Security doesn’t inspire confidence, and counting on the program for a comfortable retirement is a gamble, to say the least.

No matter how close or far away from retirement you are, it’s time to start looking for a Plan B.

But that’s easier said than done. With uncertainty ruling the global economy, betting on assets that traditionally go in a retirement account (such as stocks and mutual funds) may end up giving you even less of a guarantee than Social Security.

So where does that leave you?

One sensible option is to safeguard your retirement with tangible, reliable stores of value that have stood the test of time, such as physical gold and silver.

Throughout history, physical precious metals have proven to be one dependable way to protect personal wealth over the long haul. Could today’s retirement crisis prove them as such once again?