3 Uncommon Signs that an Economic Collapse Could Happen Soon 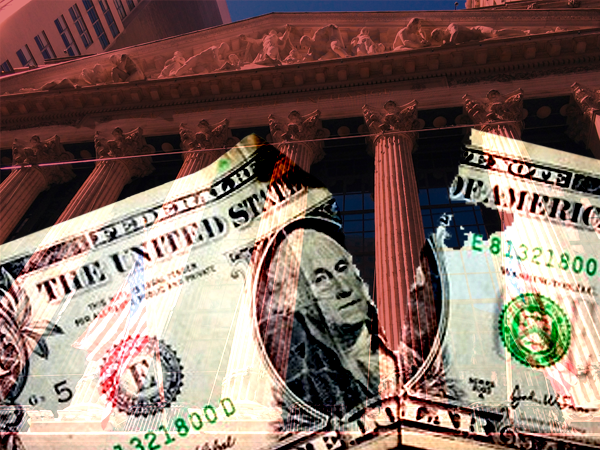 As stocks continue to climb and the U.S. economy sustains its third longest period of expansion in history, market forecasters are seeking clues for when our next crisis may strike. So far, three uncommon signals have them worried.

Here’s an explanation of the three uncommon signs causing alarm, and what they mean for your savings…

The riskiest plays on Wall Street are made using financial instruments known as derivatives.

Derivatives are named for how they “derive” their value from the underlying assets on which they’re based. They give investors the ability to leverage assets — that is, control large quantities of an asset without actually buying or selling it.

Depending on how the underlying asset performs, derivatives can generate either massive gains or crushing losses.

But it’s when big banks and financial institutions start gambling in derivatives that things become especially dangerous. And that’s exactly what happened in the case of our last crisis: A slew of “too big to fail” organizations took on excessive risk through derivatives (mortgage-backed securities and others), and they couldn’t shoulder their losses when the bets went bad.

Now one of the most potentially destructive derivatives is regaining popularity after being shunned by Wall Street for years because of its role in the 2008 collapse.

The derivative is called a synthetic collateralized debt obligation (CDO), and Citigroup is spearheading its resurgence.

Granted, post-2008 regulations do make the market for these kinds of derivatives less liable to spark another collapse, and Citigroup executives claim to be pursuing this endeavor responsibly (we can trust them, right?). But Bloomberg reports the positive trend toward CDOs is still a negative sign (emphasis ours):

This time, Citigroup says, it’s doing things differently. The deals are tailored in a way that insulates it from any losses, while giving yield-starved buyers a chance to reap returns of 20 percent or more. The market today is also just a fraction of its size before the crisis, and few see corporate defaults surging any time soon. But as years of rock-bottom interest rates have pushed investors toward riskier products, the revival of synthetic CDOs may be one of the clearest signs yet of froth in the credit markets.

Pay very close attention to that last sentence. In essence, it’s saying that today’s low yield environment is slowly pushing investors to engage in increasingly risky behavior to make satisfactory returns. Eventually, those risks get too big — just like they did in 2008 — and the whole house of cards comes toppling down.

When banks lend money to people who can’t pay it back, bad things happen. It’s called “reckless lending” for a reason. And on a large enough scale, reckless lending can be a strong catalyst for systemic financial crisis.

So what encourages banks to practice reckless lending in the first place?

Well, there are two main incentives for banks to lend recklessly:

In the case of our last crisis, both of those incentives came into play.

The mortgage lending sector transformed from a duopoly into a tightly competitive market of various lenders, which drove lenders to loosen standards in an attempt to woo borrowers. On top of that, credit demand from high quality borrowers was sparse, further encouraging lenders to approve loans for risky borrowers.

The toxic combination of “competition from other lenders” and slowing mortgage demand is cited by senior executives of mortgage lenders as the source of all kinds of headaches for the mortgage lending industry.

Primarily due to this competition amid declining of demand for mortgages, the profit margin outlook has deteriorated for the fourth quarter in a row, according to Fannie Mae’s Q3 Mortgage Lender Sentiment Survey. And the share of lenders that blamed this competition as the key reason for deteriorating profits “rose to a new survey high.”

And how are lenders combating this lack of demand and the deteriorating profit margins that are being pressured by competition? They’re loosening lending standards.

Worse yet, house prices across the country remain grossly inflated. In fact, they’ve far surpassed their pre-2008 housing bubble levels, according to the Case-Shiller US Home Price Index. This means lenders are loosening mortgage standards and pushing borrowers into an inflated housing market, just like they did during the years leading to 2008.

If interest rates rise too fast — a very real possibility considering the Fed plans to start unwinding its $4.5 trillion balance sheet and hike rates once more this year — millions of homeowners could find themselves underwater just like they did nearly 10 years ago.

Loosening mortgage standards at a time like this can only do one thing: Set us up for yet another wave of defaults and foreclosures… which could easily pop the housing bubble and wreck the entire economy.

Analyzing variables with a direct relationship to the market is the first step in forecasting potential future outcomes. But taking a broader look at more obscure correlations can give even deeper insight.

Take the Barclays “Skyscraper Index,” for example. Gathering data from the past 100+ years, the index examines historical booms in large commercial construction projects (primarily skyscrapers), and their tendency to precede economic downturns.

Barclays’ breakdown of the relationship is compelling, to say the least… the index tracks a firm correlation between completion of record-height skyscrapers and severe market downturns — from our last major recession all the way back to The Long Depression of 1873.

Followers of the index today believe conditions are shaping up for it to be proven right once again, as cities across China, India, Saudi Arabia, and the U.S. erect another round of the tallest skyscrapers in history.

A good example of this is in Denver where a Manhattan developer is moving forward with plans to build a 1,000-foot skyscraper, which would dwarf all the other buildings in Denver.

One of the wisest ways investors can respond to these uncommon indicators is to seek security in proven, tangible assets. Unlike stocks, bonds, ETFs, mutual funds, and the like, these tangible “real assets” can never go to zero, regardless of what havoc grips traditional markets.

Which “real assets” work best for protection? Well, there are several options… But physical precious metals have been investors’ first choice for centuries.

In light of the signs discussed above, it’s no wonder metals prices have steadily risen in recent months. And you can expect them to climb higher as more investors come to grips with the reality of our current situation.